Uh-Oh: AOC's Goya Boycott is Having a Massive Effect Across the Country

After Goya Foods CEO Robert Unanue visited the White House for a Hispanic jobs initiative and said nice things about President Trump, the wise and tolerant left had a tantrum and threatened to destroy his company unless he bends the knee to them.

AOC, the job-killing congresswoman and Joe Biden climate adviser from New York, took to Twitter to support a boycott.

Oh look, it’s the sound of me Googling “how to make your own Adobo” https://t.co/YOScAcyAnC

.@GoyaFoods has been a staple of so many Latino households for generations.

Now their CEO, Bob Unanue, is praising a president who villainizes and maliciously attacks Latinos for political gain. Americans should think twice before buying their products. #Goyaway https://t.co/lZDQlK6TcU

A recent cancel culture target develops an affinity for his captors.

We learned to bake bread in this pandemic, we can learn to make our own adobo con pimienta. Bye. https://t.co/qKHNYfkqCq

The Creepy News Network cheered the destroyers on.

Adios, Goya! That seemed to be the prevailing sentiment on social media after Goya Foods CEO Robert Unanue praised President Trump at a White House ceremony on Thursday afternoon. Speaking at a Rose Garden event, Unanue said, “We’re all truly blessed, at the same time, to have a leader like President Trump who is a builder.” He compared Trump to his grandfather, an immigrant from Spain who founded the company in 1936. Almost at once, a backlash ensued on social media, under hashtags like #Goyaway and #BoycottGoya.

The boycott of Goya is entirely warranted. Many Latinos are angry at Unanue, and they are sad and disappointed in him, too. His remarks reflect how out of touch CEOs can be to their primary consumers, and to the national mood.

Is it? Is the boycott “warranted” because the CEO said positive things about the president at the White House, at a forum about creating jobs for Hispanics? Is destroying an 85-year-old company and many jobs really the right and proper response to an opinion one that does not support? Is hurting innocent people because one man said something you didn’t like really the best approach here?

Note that the story never quotes any normal, non-opportunistic politico who is angry about any of this.

What’s happening beyond the swamp between Maryland and Virginia?

This guy raised $100 grand to buy Goya products and donate them to food banks. People are hungry (which AOC recently blamed for the murder and mayhem spike in her city) and Goya is good food to feed them.

People are reporting and posting photos of empty Goya grocery shelves in their area.

Here’s one from a Publix in New Jersey. I’ve covered the poster’s identity because, well, crazy people like to doxx other people. 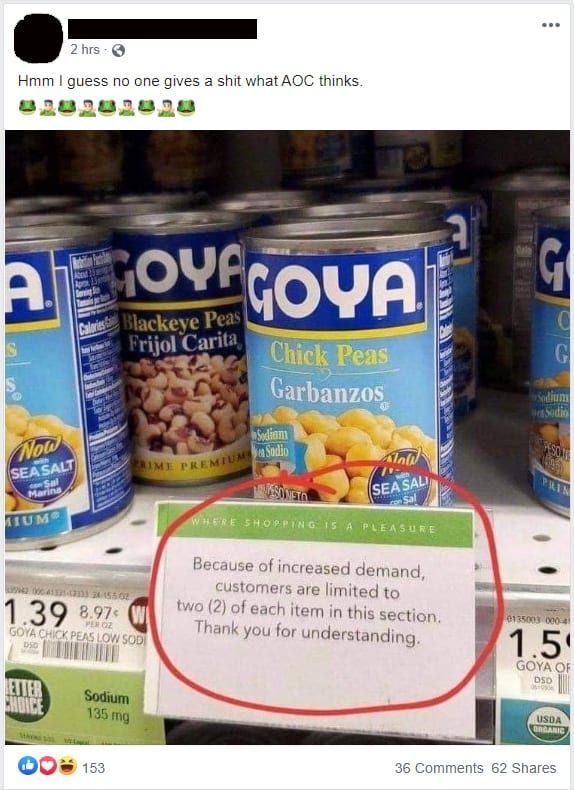 Here’s one from a friend in Texas, used with their permission. 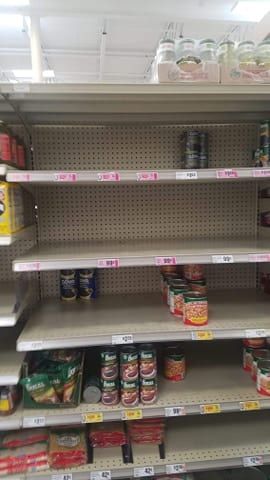 Empty shelf of Goya products in a Texas grocery store.

Those shelves are supposed to be full of Goya goodness.

The boycott has become a buycott.