Weekly COVID News Wrap-Up: Cases Are Dropping and No One Is Sure Why

This week was particularly busy in COVID news including two major top-line stories involving the current impact of the disease on Americans.

Most notably, COVID cases, hospitalizations and deaths have dropped precipitously in the United States in the last several weeks. Experts are unsure why we are seeing such a drop as vaccinations shouldn’t be having this dramatic of an impact quite yet. 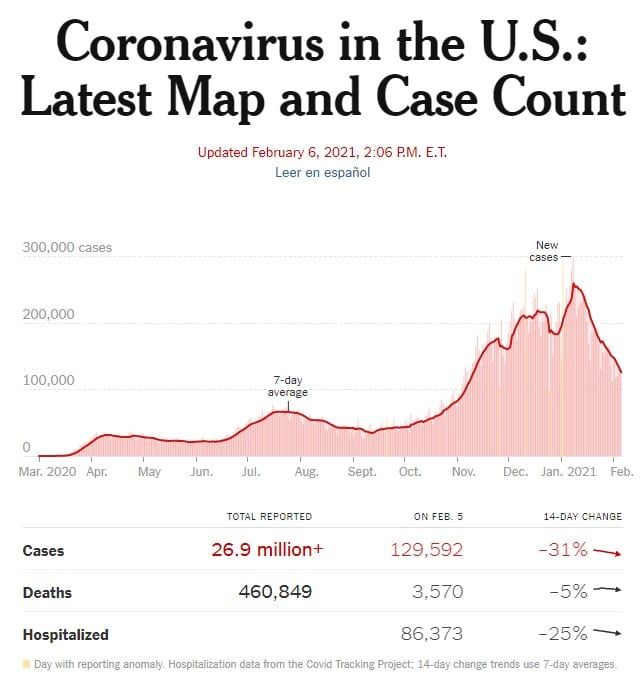 The other major story of the week is the renewed impact of COVID-driven lockdowns on the U.S. economy.

According to the Bureau of Labor Statistics, the U.S. economy created only 49,000 net jobs in January following a decline of 227,000 in December. While the unemployment rate tumbled from 6.7 percent to 6.3 percent, about half of the decline was due to workers dropping out of the job market, too discouraged to look for work.

But there were a host of other COVID-related developments both in the United States and around the globe.

Tomorrow, millions will take part in the national American party: Super Bowl 55.  But the Centers for Disease Control is warning about Americans letting their guard down about the pandemic and holding crowded house parties which are a Super Bowl staple. The CDC says normal house parties could wind up being “mini superspreader” events and instead suggests Americans celebrate with housemates or through virtual Super Bowl parties.

Gathering virtually or with the people you live with is the safest way to celebrate the Super Bowl this year. If you do have a small gathering with people who don’t live with you, outdoors is safer than indoors. This year, choose a safer way to enjoy the game.

The move, which Austin approved Thursday, will send 1,110 active-duty military personnel to five FEMA COVID vaccination centers, according to a Department of Defense fact sheet. That will include 444 on two Army teams, and teams of 222 each from the Air Force, Navy and Marine Corps, according to DoD.

Each team will have 80 people administering vaccines, 15 registered nurses, 57 clinical staff, 15 people for “command and control” and 55 for “general purpose,” according to DoD.

A new tool in the fight to stop COVID-19 took one step closer to approval. Johnson & Johnson submitted its paperwork on Thursday to the U.S. Food and Drug Administration for its one-dose vaccine injection. The FDA has scheduled an advisory committee meeting on February 26 to consider the application for use.

Johnson & Johnson applied for an emergency use authorization from the Food and Drug Administration for its coronavirus vaccine after releasing data last week showing it was about 66% effective in protecting against the virus.

If J&J’s application is approved, it would be the third Covid-19 vaccine authorized for emergency use in the U.S. behind those developed by Pfizer-BioNTech and Moderna. Pfizer’s vaccine was authorized by the FDA on Dec. 11, and Moderna’s was authorized a week later.

The head of the Centers for Disease Control and the White House became embroiled in a publicly-aired kerfuffle this week about the need to vaccinate teachers before schools are allowed to open.

Teachers do not need to get vaccinated against Covid-19 before schools can safely reopen, the head of the Centers for Disease Control and Prevention said Wednesday.

“There is increasing data to suggest that schools can safely reopen and that safe reopening does not suggest that teachers need to be vaccinated,” CDC Director Dr. Rochelle Walensky told reporters during a White House news briefing on Covid-19.

During a press briefing later Wednesday, White House press secretary Jen Psaki walked back Walensky’s comments, saying that they were not “official guidance” from the CDC.

If Walensky were here, she would say “that they have not released their official guidance from the CDC yet on the vaccination of teachers and what would be needed to ensure the safe reopening of schools,” Psaki said.

All of this comes against the backdrop of teacher’s unions across the country refusing to go back to school until there are full vaccinations. It has set the table for a complicated political dance for the Biden Administration as these unions formed the backbone of his electoral coalition in November.

There may be some further clarity as we look forward to this week. The CDC says we should expect further official guidance from the agency about the issue over the next few days.

And finally, the World Health Organization is pressing wealthy nations to give their vaccines to poor countries as soon as possible. WHO Europe Director Hans Kluge gave a wide-ranging interview with Agence France-Presse on Friday about the challenges Europe and the world are facing due to slow vaccination rollouts worldwide. Among his suggestions was a bit of healthcare socialism.

He [Kluge] reiterated the WHO’s call for rich countries to show solidarity toward poor nations unable to buy vaccines, urging wealthy ones to share their doses after having inoculated a portion of their own population.

Kluge suggested wealthier nations share their vaccines once they have inoculated “elderly people, health care workers and people with comorbidity” – without waiting to cross the 70% threshold required to attain herd immunity.

“If they hit 20% of their population, maybe that’s the moment that they can already start to share some vaccines,” he said.

That’s the wrap on COVID news this weekend.

Bruce Carroll created the gay conservative blog "GayPatriot" in 2004 and the site became one of the most popular political blogs. In addition, Bruce has written columns for USA Today and the Daily Caller, hosted numerous podcasts, and holds the record for the most banned Twitter accounts.
Read more by Bruce Carroll
Tags: COVID-19 CDC SUPER BOWL