A Divine Miracle For Skeptics Who Do Not Believe In Miracles

Next to the Pope my authority on all things Catholic is my devout 89-year-old father-in-law, a long retired “government worker” from an agency that shall go unnamed. He possesses an encyclopedic knowledge of physics, history, politics and religion with a special interest in “supernatural” miracles of the Bible and Divine miracles in general.

So recently, after my husband and I had watched an interesting documentary on the making of the atomic bomb known as “The Manhattan Project,” we both agreed that Dad would also enjoy the program and the next time he came over we would replay it for him.

Today was that day.

So after he watched it, I asked my father-in-law if he had enjoyed the documentary. He said he did, but already knew much of the story. (Of course!)

However, he expressed disappointment that the documentary did not mention a group of Jesuit priests who survived the Hiroshima bomb blast without any major injuries at ground zero.

I told him this oversight was not surprising since it was, after all, a History Channel documentary but I still doubted the truth of this miraculous Hiroshima tale.

As Dad began to describe what he said was surely a Divine miracle, I hopped on Google and entered “Jesuit priests survived Hiroshima”. To my surprise, instantly there appeared numerous links to this amazing, true story now almost lost in the sands of time.

Here are the basic facts of this historical occurrence. 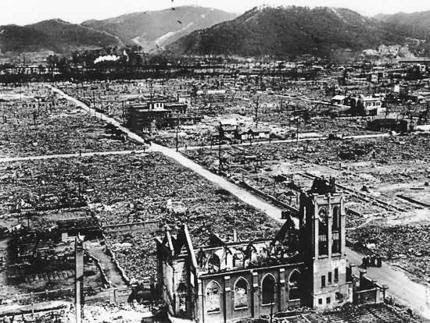 In Hiroshima, a group of eight Jesuit priests lived in a presbytery near the parish church less than a mile away from where the first atomic bomb ever dropped on a city exploded well within the total death and devastation radius. Keep in mind this was a blast that killed 80,000 people almost instantly and up to a total of 140,000 eventually.

At Hiroshima "Little Boy" destroyed over two-thirds of the buildings.

All eight priests in their home building sat in the direct kill zone while for miles around nothing but ashes remained. They were not only “virtually unscathed from the effects of the bomb” but none of the group suffered either the ill-effects of radiation or major injuries from the bomb blast.  Furthermore, while their building received some damaged, unlike others it still stood.

While it is true that small numbers of other civilians in the blast area survived, all presumably suffered, and most if not all eventually died from radiation sickness.

What is truly miraculous is that radiation sickness did not affect ANY of the Jesuits at that time or decades later.

Why were these eight priests spared in an area of total death and destruction?