It's Hard Out Here for a Nanny State

In the future when I post an article on the constant encroachment by Democrats on our individual liberties, I intend to use the prefix Control Freaks. Because that’s the best two-word summary I can come up with for the inane, arbitrary dictates dreamed up by the likes of Bloomberg (not the news service, the idiot mayor), who wants to ban salt in Manhattan restaurants. 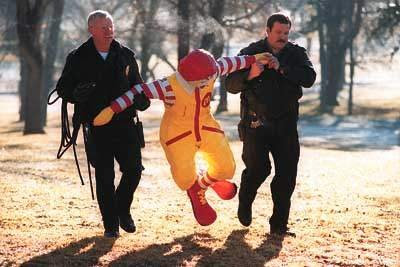 San Francisco — or, as I like to call it, Moonbase Pelosi — is the latest local government to demonstrate a complete lack of restraint when it comes to regulating the citizenry. In this case, it appears a lunatic somehow broke into a meeting of the city’s board of supervisors and introduced legislation to ban Happy Meals.

Supervisor Mar introduces Healthy Meal Incentive legislation, which sets nutritional standards for restaurant food that is accompanied by toys or other youth focused incentive items. This legislation is aimed at promoting healthy eating habits and to address issues related to childhood obesity…

…Fast food restaurants target children and youth by offering toys and other incentive items. The Healthy Meal Incentive legislation would encourage restaurants to provide healthier meal options. To provide an incentive item, meals must contain fruits and vegetables, not exceed 600 calories or 200 calories for a single food item and must not have beverages that have excessive fat or sugar.”

But why bother banning a product aimed at kids, when your earlier policies have driven kids away from your city? As I wrote in 2005, “Where Are The Frisco Families?”

Back in 2002, we linked to a Los Angeles Times story that a lack of family-oriented attractions was hurting the San Francisco tourist industry.

But San Francisco has a deeper problem–a lack of families themselves. James Taranto writes:

“San Francisco has the smallest share of small-fry of any major U.S. city,” the Associated Press reports. “Just 14.5 percent of the city’s population is 18 and under.” The AP dispatch attributes the small number of children to high housing costs and Frisco’s high prevalence of nonprocreative sexual orientations. Not mentioned is the Roe effect. The AP also describes how the city is responding:

Determined to change things, Mayor Gavin Newsom has put the kid crisis near the top of his agenda, appointing a 27-member policy council to develop plans for keeping families in the city. . . .Newsom has expanded health insurance for the poor to cover more people under 25, and created a tax credit for working families. And voters have approved measures to patch up San Francisco’s public schools, which have seen enrollment drop from about 62,000 to 59,000 since 2000.

One voter initiative approved up to $60 million annually to restore public school arts, physical education and other extras that state spending no longer covers. Another expanded the city’s Children’s Fund, guaranteeing about $30 million a year for after-school activities, child care subsidies and other programs.

So the lack of children is a reason to spend more taxpayer money on schools and other programs for kids. If there were more kids, would that be a reason to spend less? The question answers itself, doesn’t it? As Ronald Reagan once observed, “No government ever voluntarily reduces itself in size. Government programs, once launched, never disappear. Actually, a government bureau is the nearest thing to eternal life we’ll ever see on this Earth.”

Of course, Frisco’s anti-family/anti-free market woes are a microcosm of the totalitarian regulations that inhibit business development throughout the state, as Joel Kotkin writes in City Journal this month:

Since the financial crisis began in 2008, the state has fared even worse. Last year, California personal income fell 2.5 percent, the first such fall since the Great Depression and well below the 1.7 percent drop for the rest of the country. Unemployment may be starting to ebb nationwide, but not in California, where it approaches 13 percent, among the highest rates in the nation. Between 2008 and 2009, not one of California’s biggest cities outperformed such traditional laggards as New York, Pittsburgh, and Philadelphia in employment growth, and four cities—Los Angeles, Oakland, Santa Ana, and San Bernardino–Riverside—sit very close to the bottom among the nation’s largest metro areas, just slightly ahead of basket cases like Detroit. Long a global exemplar, California is in danger of becoming, as historian Kevin Starr has warned, a “failed state.”

What went so wrong? The answer lies in a change in the nature of progressive politics in California. During the second half of the twentieth century, the state shifted from an older progressivism, which emphasized infrastructure investment and business growth, to a newer version, which views the private sector much the way the Huns viewed a city—as something to be sacked and plundered. The result is two separate California realities: a lucrative one for the wealthy and for government workers, who are largely insulated from economic decline; and a grim one for the private-sector middle and working classes, who are fleeing the state.

Related: “The number of restaurants operating nationwide dropped this year for the first time in more than a decade, a survey shows, with California accounting for almost a third of the losses.”