Philadelphia Eagles wide receiver DeSean Jackson faced accusations of anti-Semitism following his bizarre decision to share a fake quote from genocidal Nazi dictator Adolf Hitler. The quote warned that “white Jews” will “extort America” in a “plan for world domination” that only “the Negroes” can stop. The quote also claimed that “the Negroes are the real Children of Israel.” When called out on the offensive post, Jackson at first doubled down, claiming he “has no hatred’ in his heart. Then he re-posted it.

Only after the Eagles leadership spoke with Jackson and released a statement condemning the anti-Semitic post did the wide receiver finally delete it and issue an apology.

“I post a lot of things that are sent to me. I do not have hatred towards anyone. I really didn’t realize what this passage was saying,” Jackson wrote. “Hitler has caused terrible pain to Jewish people like the pain African-Americans have suffered. We should be together fighting anti-Semitism and racism. This was a mistake to post this and I truly apologize for posting it and sorry for any hurt I have caused.”

“You know, I just probably shouldn’t have never posted anything that Hitler did because Hitler was a bad person and I know that,” Jackson said in the video understatement of the year. “You know I was just tryin’ to uplift, you know, African Americans and slavery, and just enlighten my people.”

I post a lot of things that are sent to me. I do not have hatred towards anyone. I really didn’t realize what this passage was saying. Hitler has caused terrible pain to Jewish people like the pain African-Americans have suffered. We should be together fighting anti-Semitism and racism. This was a mistake to post this and I truly apologize for posting it and sorry for any hurt I have caused.

Jackson did not explain how spreading anti-Semitic conspiracy theories and claiming that black people are the “real Children of Israel” could possibly “enlighten” anyone, regardless of any Hitler connection.

Jeffrey Lurie, the owner of the Eagles, and Howie Roseman, the team’s general manager, are both Jewish.

The Eagles put out a statement condemning Jackson’s original message but did not take any immediate action against the wide receiver, even though Jackson would likely have been immediately fired if he were a white man spreading lies about black people. (Drew Brees stood up for the American flag and even that uncontroversial stance led to a torrent of outrage against him.)

“We have spoken with DeSean Jackson about his social media posts. Regardless of his intentions, the messages he shared were offensive, harmful, and absolutely appalling,” the Eagles leadership said in a statement. “They have no place in our society, and are not condoned or supported in any way by the organization.”

“We are disappointed and we reiterated to DeSean the importance of not only apologizing, but also using his platform to take action to promote unity, equality, and respect. We are continuing to evaluate the circumstances and will take appropriate action,” the leadership added. “We take these matters very seriously and are committed to continuing to have productive and meaningful conversations with DeSean, as well as all of our players and staff, in order to educate, learn, and grow.”

Uh-huh. The Eagles just want everyone to “educate, learn, and grow.” Last year, however, an NFL announcer was immediately suspended because he mentioned a player’s “dark skin” while narrating the game. Rather than receiving a talking-to, the announcer was suspended, even though he apologized and two black players came to his defense. It remains unclear whether or not the suspension has been lifted.

“If a white player said anything about [African Americans] as outrageous as what Desean Jackson said about Jews tonight there would at least be a serious conversation about cutting him and a need for a team meeting to discuss,” tweeted Joe Banner, former president of the Philadelphia Eagles. “Which would be totally appropriate. Absolutely indefensible.”

If a white player said anything about AA’s as outrageous as what Desean Jackson said about Jews tonight there would at least be a serious conversation about cutting him and a need for a team meeting to discuss. Which would be totally appropriate. Absolutely indefensible.

Hitler said, “because the white Jews knows that the Negros are the real Children of Israel and to keep Americas secret, the Jews will blackmail America.

The will extort America, their plan for world domination won’t work if the negros knew who they were.

The white citizens of America will be terrified to know that all this time they’ve been mistreating and discriminating and lynching the Children of Israel.

They will fear God will destroy them as he destroyed Egypt for doing the same thing. So the elite, the Illuminati keeps this a secret at all cost.

After I die, I will one day cause World War 3 just by this message which will be like planting a seed in people minds until it sprouts once they nurture that seed and seek more truth and learn Hitler was right.

Wisconsin Prof Blames U.S. for Coronavirus, Says ‘This Is Exactly Like What Happened With Hitler’ 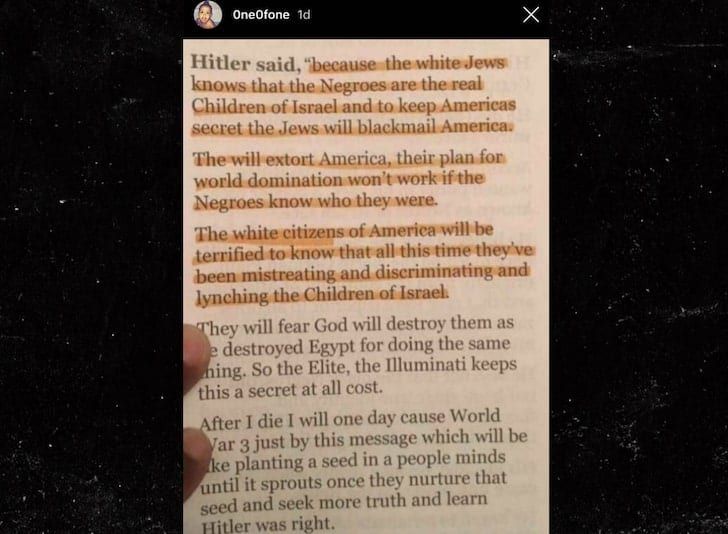 Snopes has thoroughly busted this fake quote, but the misquote has made the rounds on the internet, regardless.

How did an NFL star ever think it would be acceptable to post such a hateful misquote? According to TMZ, DeSean Jackson includes many tributes to notorious anti-Semite and Nation of Islam leader Louis Farrakhan. Farrakhan has condemned Judaism as a “gutter religion” and praised Hitler as a “great man.”

This anti-Semitic idea that black people are the “real Children of Israel” motivates part of the Black Hebrew Israelite movement — perhaps best known for the incident with MAGA-hat-wearing teen Nick Sandmann last year. Many Black Hebrew Israelites teach that black people are the descendants of ancient Israelites. Some prophesy that a black Jesus will return to earth to enslave and kill white people.

While some black people can trace their DNA back to Israel, there is no evidence that the ancient Israelites were predominantly black, nor that Jesus Himself was black. Christian churches across the world have portrayed Jesus in many different racial views, but He was a Middle Eastern Jew, not white, black, or Chinese.

Contrary to popular belief, anti-Semitism is not only a white problem. When two shooters killed three people at a kosher grocery store in Jersey City in 2019, Joan Terrell-Paige, a member of the Jersey City Board of Education, attacked calls for “faith and hope” in solidarity with the Jewish victims and instead urged locals to be “brave enough to explore the answer to [the shooters’] message.” She also referred to Jewish people as “brutes.” While local leaders initially condemned her, the local Democratic black caucus rallied around her and some even hailed her as a modern “Rosa Parks.”

Americans must condemn the horrific anti-Semitism of Louis Farrakhan, some Black Hebrew Israelites, and Joan Terrel-Paige. DeSean Jackson rightly apologized for his post, but he shouldn’t stop there. The Eagles wide receiver should also disavow Louis Farrakhan and all forms of anti-Semitism.

The Eagles may have been right not to fire him, but some sort of discipline should not be off the table. If white — or even Jewish — players made racist statements against black players, they would face much harsher treatment. If the NFL is no place for racism, that should include anti-Semitism as well.

Riots, Murder Hornets, Hold My Beer. This Farrakhan Coronavirus Conspiracy Theory Is Something Else