People With a Sense of Purpose More Likely to Support Capitalism, Study Finds

Friedrich Nietzsche famously wrote that “he who has a why to live can bear almost any how.” In his seminal work Man’s Search for Meaning, Viktor Frankl powerfully argued that a sense of purpose is essential for survival, bolstering his claim with his own experiences in the death camps during the Holocaust. According to a groundbreaking new study first provided exclusively to PJ Media, people who are confident about their ability to maintain a sense of meaning or purpose in life are more likely to support capitalism and entrepreneurship. This means free markets are linked with the spirit of meaning so vital to human flourishing.

“It’s clear that the presence of meaning leads to higher levels of ‘existential agency,'” Ben Wilterdink, Director of Programs at the Archbridge Institute, a think tank focused on economic mobility, said in a statement. “However, what’s also clear now is that Americans with a higher level of existential agency are more likely to support economic freedom—namely, capitalism and entrepreneurship. And they are more likely to believe that markets can solve some of America’s greatest challenges, such as climate change and poverty.”

In the study, Clay Routledge, professor of psychology at North Dakota State University, surveyed 1,269 Americans from ages 18 to 88 and discovered that 40 percent of respondents expressed a positive view of capitalism, 46 percent expressed a neutral view, and 14 percent expressed a negative view. Older adults, those with higher incomes, and those who identified as conservative proved more likely to support free markets.

Yet those who supported capitalism also proved more likely to report having a sense of meaning or purpose in life. They also tended to have other indicators associated with meaning in life, such as religiosity and strong relationships with family and friends.

The higher a person scored on “existential agency,” the more he or she viewed capitalism and entrepreneurship as helpful for solving societal challenges like poverty, climate change, and automation. 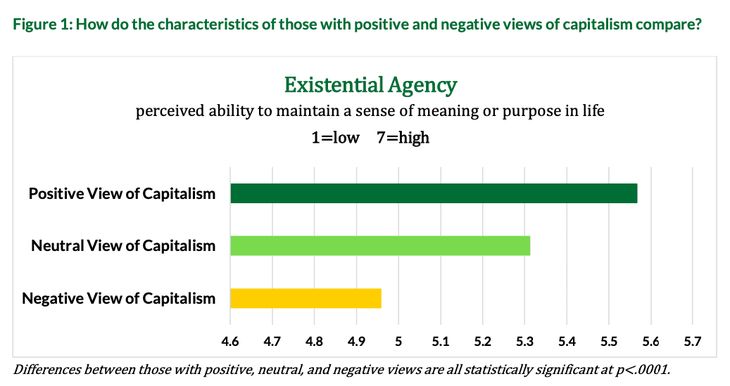 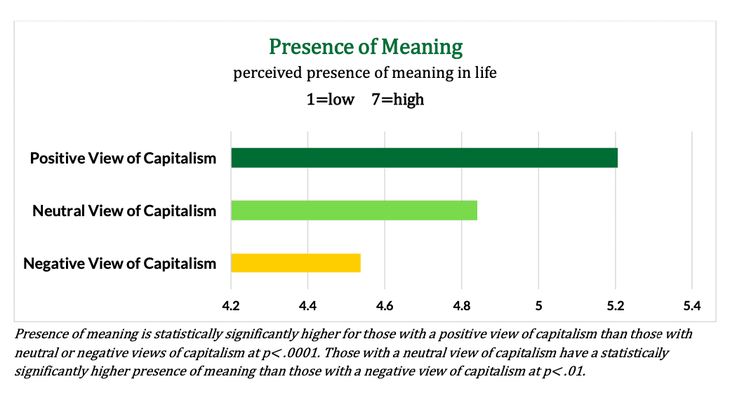 A full 23 percent of respondents said they plan to start their own businesses in the future, and these aspiring entrepreneurs also expressed a deeper sense of meaning or purpose in life.

Citing other research he had conducted in the past, Routledge concluded that “based on research identifying a causal chain from meaning in life to self-regulatory and goal-directed behaviors that help people flourish, even ignoring the correlational findings from our new study, there are reasons to believe that meaning in life is important for sustaining economic freedom and cultivating the entrepreneurial spirit.”