I’m not quoting famous Looney Tunes character Elmer Fudd. I’m quoting me, age seven, during the summer of our nation’s bicentennial. I would have been in the woods in my grandparents’ back yard, carrying a stick the approximate size and shape of a shotgun, and imitating one of my favorite cartoons.

Like millions of other people GenX and younger, I grew up on a steady diet of Looney Tunes. That means I witnessed countless acts of violence, including but not limited to:

• A duck getting his beak shot to the back of his skull.

• A coyote getting himself smashed into mountains, blown up, and hurled into deep canyons.

• A cat smashed by an iron so hard his face became iron-shaped.

• A hunter with a shotgun shooting at defenseless animals.

• A helmet-wearing Martian with a giant ray-gun attempting to blow up the entire Earth.

Because of all these heinous acts I witnessed, I would later grow up to enter a life of crime, including serial killing, bank robbery, and making underseasoned rabbit stew.

Just kidding, of course. I’m a quietly exurban, happily married father of two, whose most violent act is killing the spiders my wife won’t. Also, I never, ever, ever underseason the stew.

It’s a miracle I turned out this well, according to modern thinking. Not only did I watch ultraviolent cartoons as a kid, but in my tween and teen years, I graduated to even worse fare. I enjoyed Hammer Studios horror movies, the entire Charles Bronson revenge film oeuvre, and even the uncut version of Robocop. You know, the home video edit where they actually showed Peter Weller getting his hand shot off by a shotgun? Wasn’t that awesome?

There was even a time in my young life when the debate over whether Michael Myers or Jason Voorhees starred in the better slasher movies was a point of contention so serious that friendships were broken over it.

Maybe I should be ashamed to admit that, but I’m not.

The first is that the classic Looney Tunes cartoons from the ’30s through the ’60s are a kind of gateway drug for ever-more violent entertainment, all the way up to actually cheering when Kevin Bacon gets an arrow pushed all the way through the front of his throat from the back of his neck in the first Friday the 13th movie. That was pretty awesome, too.

Second, history has proven that none of it did me any harm.

The reason I mention all this is because WarnerMedia has decided to reboot the classic Looney Tunes franchise, but with a twist.

Both Elmer Fudd and Yosemite Sam will lose their firearms.

Elmer Fudd was a hunter. You can tell by his hat. And his shotgun. And because he was always out in the woods hunting rabbits and/or ducks.

Yosemite Sam was a bad-tempered Old West gunslinger (except when he was a bad-tempered pirate with canons). You can tell because he was always yelling at everyone and/or shooting them. Usually with his six-shooters, but sometimes with the aforementioned canons.

A question: What’s to become of these beloved characters?

Another question: Who the hell shoots a rabbit with a ship’s canon? But we’ll leave that one for another day.

According to the New York Post, the rebooted Elmer will “use a scythe to try to bag Bugs,” I suppose because hacking up bunny rabbits (and/or ducks) with a long-handled curved blade is much more family-friendly.

Check out this clip of the Reboot Fudd in action in “Dynamite Dance.”

It’s like an ’80s slasher movie done by hippies on acid.

Left unsaid is what will become of Yosemite Sam, now that he’s been stripped of his six-shooters. Maybe they could make him a gold prospector and he’d use his trusty pickaxe to brain his enemies, real or imagined.

That would be OK though because “we’re not doing guns,” executive producer Peter Browngardt told the New York Times.

The Telegraph reports that “sticks of dynamite, anvils on the head and booby traps will still feature in the series.” So if you think about it, scythe-wielding “hunters” and an angry prospector armed with a pickaxe aren’t that far removed from classic Looney Tunes tradition.

I’m being facetious of course about Warner turning Elmer and Sam into deranged killers. But isn’t it curious that the media conglomerate — Warner is a wholly-owned subsidiary of the AT&T infotainment complex — has chosen to eliminate only one particular kind of comedic mock violence?

Drop an anvil on somebody? Laff riot. Stick dynamite down somebody’s pants? That’s a real gut-buster. But carrying a shotgun for duck hunting or show an Old West gunslinger with guns… that’s a crime against humanity or something.

So why is Warner disarming two of its best-loved cartoon characters?

According to that Telegraph report, the decision was made “in response to US gun violence,” which has skyrocketed in recent decades. 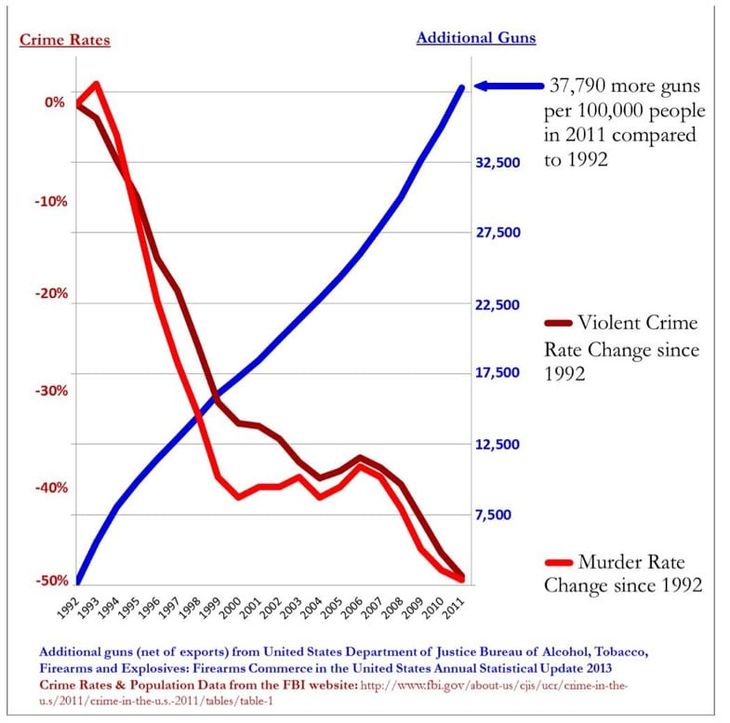 Well, maybe not so much “skyrocketed.” Actually, as I’m sure you’re aware, violent crime here has been in a longterm decline, while at the same time Americans are buying up more firearms and ammo than ever.

In the spirit of evenhandedness, I’ll remind you that correlation is not causation. That is to say, the increase in gun ownership might not be the reason for the decline in violent crime. That’s particularly true for what critics call “gun violence,” as though guns were running around loose, hurting each other like cartoon characters.

But the fact is that more than half of all “gun violence” deaths are actually suicides.

In 2017, according to the most recent data available:

Though they tend to get less attention than gun-related murders, suicides have long accounted for the majority of U.S. gun deaths. In 2017, six-in-ten gun-related deaths in the U.S. were suicides (23,854), while 37% were murders (14,542), according to the CDC. The remainder were unintentional (486), involved law enforcement (553) or had undetermined circumstances (338).

At 14,542, gun-related murders are relatively rare these days in a country of some 327 million people. If we were to remove gang-related killings, which represent a failure of good policy and good policing mostly in our big cities, even that figure drops dramatically.

If anything, duck hunters are wildly underrepresented in the total number of gun-related murders.

As for Yosemite Sam, the Wild West wasn’t all that wild in reality. Peter J. Hill wrote in 2005 that “the violence of the West is largely a myth.”

In three years, more than 200,000 people had migrated to California, most of them trying to get rich quick. If there were ever a recipe for chaos, this would seem to be one: people of varied backgrounds and ethnicities, all armed and all seeking a valuable resource. But the mining camps quickly evolved rules for establishing mining claims and for judging disputes. The fact that each person carried a six-shooter meant that each had a relatively equal amount of power. That minimized violence.

Or as Robert Heinlein famously quipped, “An armed society is a polite society.”

Whatever. Hollywood lefties gotta disarm somebody, dammit, and Elmer and Sam are the best they can do.

They’re doing it just to virtue signal to their progressive peers in Hollywood, New York, and D.C.

So go on, Warner, and take their guns away. I bet the new cartoons won’t be nearly as good as the originals with or without them.

P.S. You can buy the classic Looney Tunes box set on DVD, complete with firearms. I got mine years ago, and have been raising my kids right, on the original Elmer and Sam.

Maybe buy it while you still can.