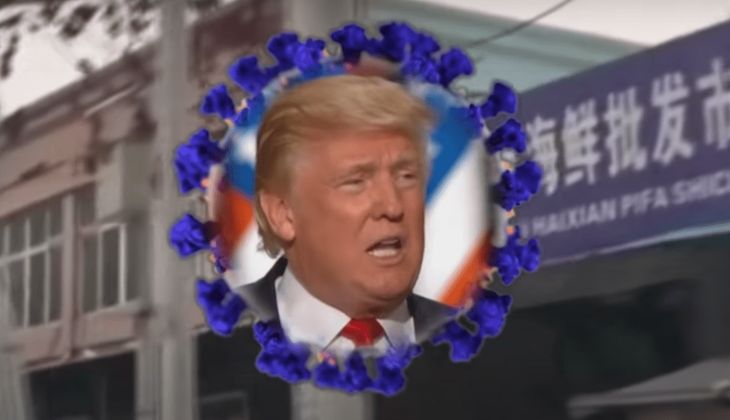 He is a man whose YouTube avatar is a dog wearing sunglasses. He claims not to care about politics, but seems bound and determined to Make America Metal Again. His President Trump-personified heavy metal parody videos have become an internet sensation.

Millennial rockers love him. Gen Xers who came of age with Al Gore’s information superhighway admire what he’s doing. Aging boomer-bangers have no idea how he does it. Together these demographics have combined to earn him over 100K subscribers who give him between 200,000 and close to one million page views per clip.

He is Lars von Retriever, and at this very moment, (or certainly within the next 24 hours) somewhere on the face of this earth, he is morphing a revered heavy metal song into a Trumpian masterpiece. Scores of top-charting songs from hard rock and metal’s biggest stars have been given the Von Retriever treatment, and he shows no sign of letting up.

Fans of the indefatigable splice-meister regularly clamor for their favorites, hoping that he will undertake to remake their favorite songs in Trump’s image. To date, only one band, specifically, legal entities representing Guns N’ Roses, has charged copyright infringement, requiring that “Welcome to the Jungle” be taken down.

I personally am waiting for Grim Reaper’s “See You in Hell.”

Hard rock and metal are musical genres that appeal to large swaths of Trump Nation. Fans of bone-crushing riffs and shredding lead guitar breaks, notwithstanding untold legions of exceptions, tend to be down-to-earth, often working-class individuals, many of them white, and many millions more of them male.

With the skill of a split-second video editor and an apparently inexhaustible talent for dubbing, Von Retriever has tapped into this reservoir of Trump alignment and heaviosity with a vengeance.

Note: Songs featured here are instrumental tracks performed by cover bands, not by the original artists.

For a song that provided a prescient invocation of the current zeitgeist, look no further than Slayer’s harrowing exploration of rampant disease. The propulsive thrash track, from an album many rock critics hail as among the best extreme metal records ever recorded (Reign in Blood, 1986) tells an alarming tale of microbiological infection.

Overlain with Trump’s alternately measured and bombastic rhetorical stylings, the tune is alarming now in a nuanced, on-the-nose kind of way.

Lemmy Kilmister didn’t live to see Trump’s election or the advent of coronavirus, but Motorhead’s acclaimed 1980 hit song from the album of the same name threw down a hand that resonates all too strongly these days. Kilmister’s over-driven, power-chorded bass sounds like an onrush of bad news, and his implacable read on the lyrics exemplifies the sense of life itself as a gamble with destiny.

The unluckiest card in the deck has been played well by Trump against Al Qaeda leaders, ISIS, MS-13, and Democrat presidential prospects in 2016.

“Down with The Sickness” Disturbed

Disturbed broke in 2000 with their ultimately 5x platinum album The Sickness, and in the estimation of many metal-heads shook the foundations of the genre. Propelled by amazing lead vocalist David Draiman, backed by a heavy-hitting power trio, the Windy City homeboys became one of the few hard rock/metal acts to break into high-rotation classic rock radio in the decade after Metallica’s eponymously-titled black album dominated airplay in 1991.

With psychic distress having become a hallmark of 2020, Disturbed’s twenty-year-old title track alludes contemporarily to the onset of illness and the threat of rage and social upheaval, envisioned as a kind of mass dysfunctionality that humankind must confront.

President Trump, who was performing at peak effectiveness before the onsets of pandemic and societal plague, now faces challenges no one could have foreseen. Despite the humor inherent in Von Retriever’s parodic talent, there is very little about the current state of politics and culture that can be described as a laughing matter.

If there has ever been a consummate political trooper, his name is Donald Trump. From the unrelenting negative mainstream press, to the impeachment/collusion-obsessed Democratic Party and unlawful plotters in the Deep State, Trump has faced more vicious adversity than any president in history.

He has survived all slings and arrows, has overcome the worst they could throw at him, and, with weak link Joe Biden the only thing standing in his way, is well on his way to total vindication and a second term.

Iron Maiden was already an established classic metal band in 1983 when “Trooper,” from their fourth studio album Piece of Mind, launched its attack on rock music’s collective eardrums.

Now, besieged on all sides by a resistance that is banking on unsettled viral science, a “pandemic”-rooted economic crisis, and riots roiling blue-state population centers to jeopardize his reelection chances, Trump must prepare for the electoral battle in which the future of the nation is at stake.

After 1981’s monumental For Those About to Rock, the band’s first #1 album, AC-DC released three eighties records that, while still enjoyed by fans, suffered in terms of critical consensus. The Australian hard-rockers came roaring back in 1990 with The Razor’s Edge and this hyper-energized blockbuster.

Thunderstruck? Mr. Trump’s election was an earth-shattering blow to the Democrats and their accomplice media. Never-Trump Republicans were shaken to their shoes. And none of these people have gotten over the shock.

In Von Retriever’s parody vid, one of the best of a good bunch, global leaders are put on notice by our 45th president. Whatever fate may have in store, America will persevere, and remain wealthy, strong, safe, and great again.

And metal again? Reportedly, Trump is a fan.

Mark Ellis is the author of A Death on the Horizon, a novel of political upheaval and cultural intrigue. Follow Mark on Twitter.

Flashback to the Night I Witnessed the Birth of Heavy Metal

Mark Ellis is Associate Editor at the Northwest Connection, Portland, Oregon’s only conservative web/print publication. He is the author of the political thriller A Death on the Horizon.