Harry's Last Mission: A Dying SEAL Battles Death to Care for His Wife 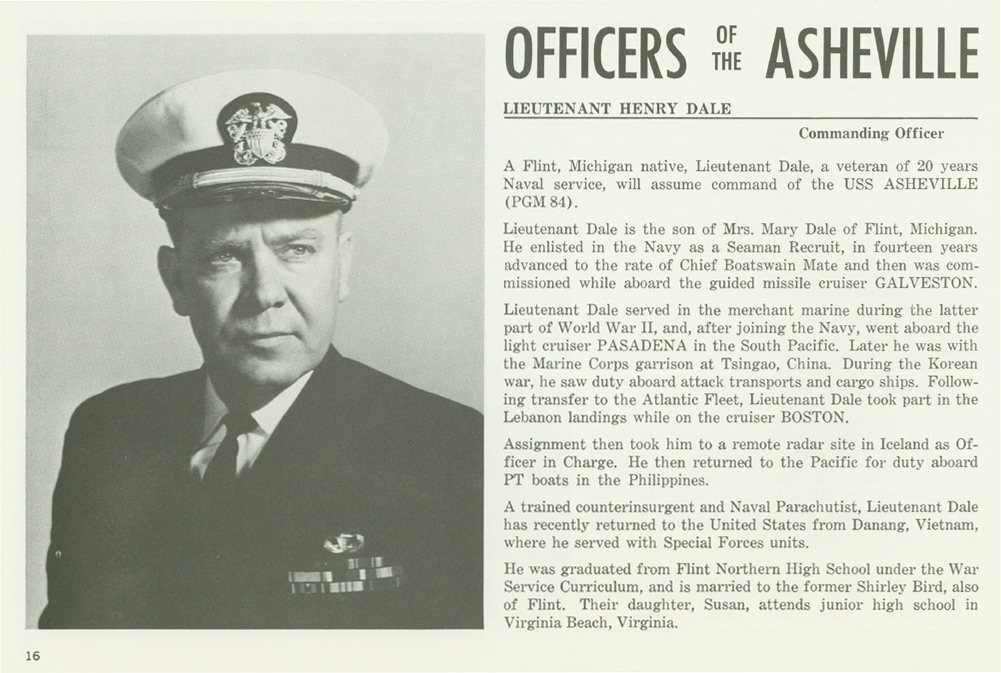 In 1966, nobody put the acronym “SEAL” in print. And about half of the two paragraphs about the erstwhile “counterinsurgent” and “Navy parachutist” were a cover story.

We are getting used to tales of heroism from US Navy SEALs. They have become almost mythic in stature in both fictional and non-fictional accounts of covert ops and wartime derring-do.

But perhaps the bravest thing I ever saw was the last mission of Harry Dale, one of the first Navy SEALs, among the first in Vietnam—and it happened nearly a quarter century after his retirement.

I met Harry in the mid-1990s.  The retired Naval officer had called the Flint Public Library because he was looking for a co-author.  The librarians there said it sounded like it was right up the alley of a local book reviewer who liked that kind of stuff—me.

If you scratch a book reviewer, you will find an aspiring novelist.  So when Harry called, I arranged to meet him at his home.  I arrived about 15 minutes early, having misjudged the time the drive would take.

When I pulled in, I saw this wiry old guy climbing out of the lake.  “Hi, Dave!” he greeted me. “Sorry, I thought I had time for a couple before you got here.”

“A couple?” I echoed, impressed. “You swam across and back a couple times?”

Then it hit me.  He was doing laps.  Now I was impressed.  Harry brushed it off: “Not much compared to my old frogman days.”

Frogman… the age… “Were you a SEAL in the Vietnam era by any chance?” I asked.

“Very good, I think the ladies sent me the right guy.  Have a seat while I get some clothes on.”

Harry was a natural storyteller, and he had a hell of a story idea in an adventure yarn about the wild and wooly days of Shanghai just before WWII, through the war, and then a race for treasure as Mao’s forces were overrunning the war-torn country.  It was called China Bones.

Harry had lied about his age to try to get into WWII, but by the time he was done with training, he arrived overseas in time to see Japanese war criminals hanged.  He ended up on a cruiser on the Whangpoo River in Shanghai, and got a taste of what the old timers called the best duty in the U.S. military, before witnessing the surrender of the formerly International City to the Red Chinese.

But I knew Harry had an even better true story in him, and eventually, I worked it out of him.  Originally, I called it Rules of Engagement, but a dreadful sitcom and a handful of mediocre thrillers got to that title first.  Recently, I published it under the title The Forest of Assassins.

Harry had run a platoon of SEALs first in the Delta, in the the Rung Sat Special Zone, where they did snatch and grab missions of Viet Cong cadres who were terrorizing the countryside.  Later, his squad took PT boats north up the coast, knocking out Russian radar stations and other targets—all under the auspices of the “South Vietnamese Navy.”

When the North Vietnamese fired on the U.S. destroyers Maddox and Turner Joy in the infamous Tonkin Gulf Incident, they thought the ships were supporting Harry’s missions.  In turn, LBJ had his excuse to escalate American military presence in Vietnam and the war went from Special Forces advisors and counter-insurgency to Big Army.  Big mistake.

Later, Harry was made the captain of the USS Asheville, a prototype patrol gunboat designed to operate in shallow waters– basically to provide fire support for operations like the SEALs were doing.  That made him the first “mustang” officer (one who rose from the enlisted ranks) since John Paul Jones to command a U.S. warship in wartime.

But Harry saved his best for last.

The author with Harry and Shirley Dale at a birthday party sometime in the early 1990s.

His beloved wife Shirley contracted emphysema, a family tendency, and Harry spent most of his time caring for her.  After she died, he began answering the kind of phone calls that people of his particular skill set never quite leave behind them.

He would tell me he was going on a “pension bump,” and that was that.  He would disappear for a few months.  That was as close as I ever got to knowing what he was up to, but it was obviously in service to his country.

Along the way, Harry got engaged to a woman who also had a winter place in the same mobile home park he did in Florida.

One day he called me.  “Dave,  I was at Quantico getting examined before a pension bump and they found a spot on my lung.  Gonna have it cut it out right away.”

Kathy, his fiancée, had a flight delay and couldn’t be at the hospital on time, so I was the only one there when he came out from the anesthesia.  “Dave, they gutted me like a fish,” he grunted. “The Agent Orange finally got me.”

That made me smile.  Harry had started smoking when he was 12, though he quit cold turkey the day Shirley had been diagnosed with her lung disorder.

Later when I told him what he’d said, he protested:  “I smoked for almost 50 years; I wouldn’t say that VVA bullshit!”

He had me arrange a preacher, and the minute he was home, he married Kathy in a ceremony at his home.

Harry had served his country well, and felt he deserved his pension (bumps and all) and that he had the right to leave it to someone.  But one has to be married for a year in order to leave a military pension to a spouse.

Though his doctors held out little hope, and the treatment made him miserable, Harry embarked on an aggressive course of chemotherapy. “I’ve gotta make a year,” he would tell me.  Kathy didn’t really approve, and looked stricken every time he went to the cancer center, but knew better than to argue.

They were married in December, and over the summer, Harry got progressively frailer.  I sat with him at chemo here and there, and I could see the dapper, upbeat, tough guy was fading.  The Navy officer from central casting was now a sick old man; but the spirit that kept him from ringing the bell to call it quits during SEAL training Hell Week was still burning.

When the Michigan weather started to turn, Harry and Kathy headed to Florida.  When I saw them off, I knew I would never see him again, despite his “See ya’ in the spring, buddy.”

“Sure,” was all I could manage.

I talked to him here and there briefly, but the conversations wore him out quickly.  I tried to call at Thanksgiving, but Kathy talked to me for a few minutes and said he couldn’t come to the phone, he wasn’t up to it.  That’s when I knew it was close.

I looked at the calendar and did a quick calculation. About three weeks.

On the morning of their anniversary, I got a call from one of Kathy’s sons.  “Dave, Mom is too broken up to come to the phone, but she wanted you to be the first call we made.  Harry died last night.”

After I recovered, I asked, “Did he make it past midnight?”

He knew what I was asking.  “Yes, he did.  Almost to dawn.  Tough old sonofabitch,” he said admiringly.

As they say in the Navy for a job well done, “Bravo Zulu.”

Harry had accomplished his last mission.