Just a quick reminder: Alec Baldwin has no problem kicking his fellow man when he’s down. The actor was quick to amplify the establishment left’s pet narrative that law enforcement officers are murderous animals. Baldwin’s 2017 instantaneous judgment on the subject is now one of the most retweeted tweets on Twitter, and deservedly so: 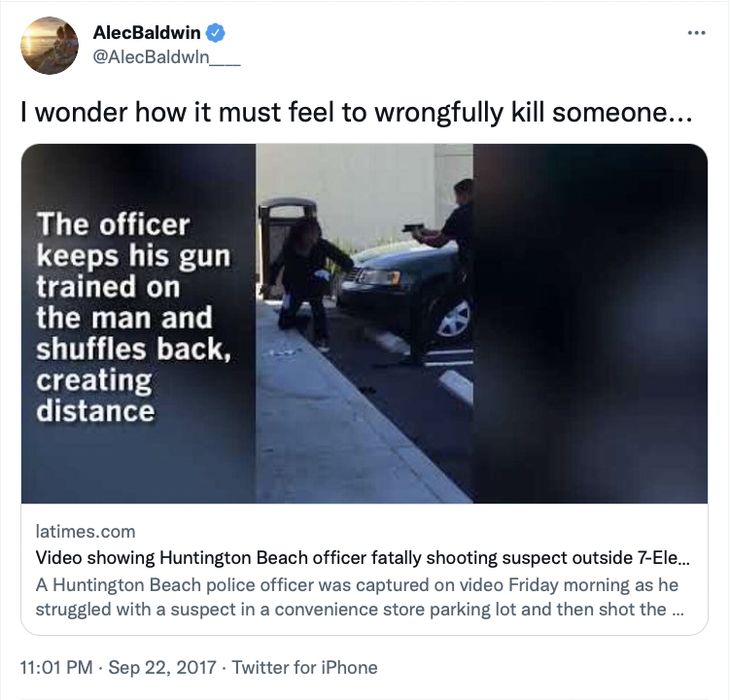 The police officer at the heart of that tragedy went on to face years of prosecution and misery, even though the DA cleared him of wrongdoing, and even though the man he shot was a vile monster still spattered with the blood of the 80-year-old man he had recently beaten to death. And unlike Baldwin, the officer was initially attacked by the man he shot.

By contrast, Baldwin shot and killed a wife and mother, who was by all accounts a lovely woman and who posed a threat to no one. Yet no snarky blue checks or pundits will snidely imply that he shot her on purpose. He enjoys a presumption of innocence never granted to law enforcement. It never remotely occurred to Baldwin that there but for the grace of God goes he. And so, he can reap what he has sown.

But is it un-Christian to hit someone when he’s down? “Love thy neighbor as thyself,” scold the leftist moralists. Okay, let’s take a look at what that looks like:

Me: accidentally locks keys in car

Just to clarify: I love Alec Baldwin. I think he’s an incredible actor with an outstanding work ethic. I’ve had a crush on him since I saw The Hunt for Red October as a tween.

Yes, we should love Alec Baldwin. Pray your backside off for him. But don’t feel bad about mocking the daylights out of him. It’s nothing you wouldn’t do to yourself.