George Orwell must be rolling over in his grave. Last week, a former prime minister’s speechwriter wrote an op-ed calling for a Nineteen-Eighty-Four-style government surveillance apparatus. Her headline in The Times of London was, “We need Big Brother to beat this virus.”

No, her article is not satire. Her subhead explains it: “Don’t let the civil liberties lobby blind us to the fact that greater state surveillance, including ID cards, is required.” 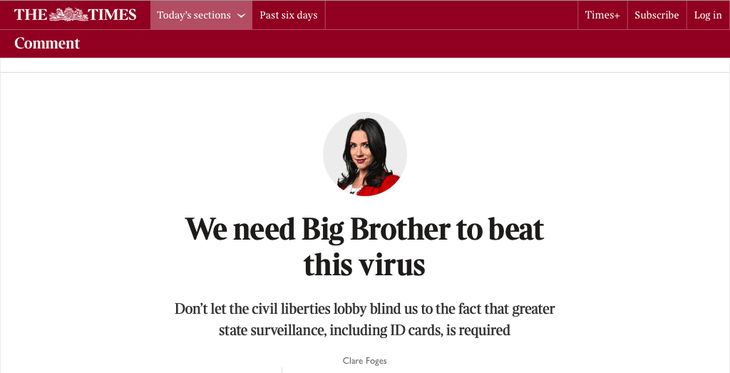 The Times screenshot: “We need Big Brother to beat this virus.”

“Prepare for dire warnings of state intrusion and an avalanche of Nineteen Eighty-Four quotes on social media warning that Big Brother is upon us,” warns Clare Foges, a Times columnist and former speechwriter for former Conservative Party Prime Minister David Cameron.

“Yet if we are to beat a path out of this pandemic without destroying our economy, overblown concerns about threats to our liberties must be countered by pragmatism. To recover some semblance of normality before a vaccine is found, we must accept the need for the state to access more information about ourselves, our health and our whereabouts — and not waste precious weeks arguing about it,” Foges insists.

She argues that “digital surveillance is an integral part of returning to ‘normal’ life,” and notes that “we all endlessly volunteer data about ourselves, unthinkingly click ‘I agree’ next to the box that pops up with every website we visit, and send information about our wants and desires to big tech companies, who monetise this information. To be comfortable selling our digital souls to Facebook and co and not to our government — which has a clear and life-saving reason for wanting some basic information — would be nonsensical.”

Foges claims that a controversial contact tracing smartphone app developed by the National Health Service (NHS) “doesn’t go far enough.” Ironically, she has a point: the app reportedly relies on self-diagnosis and is voluntary. For such an app to work across society, over 80 percent of smartphone users must use it.

She also supports an ID card system to prove the status of those who have overcome the virus and to trace the infected.

Foges urges the British to “look East” for inspiration.

Hong Kong has mandatory tracking wristbands for those in quarantine. In Taiwan the phone-tracking system is known as an “electronic fence”; those who are meant to be in isolation will be visited by the authorities if their phone is turned off. In South Korea the pooling of data from credit card use, mobile phones and CCTV cameras means that they can detail the movements of an infected citizen down to where they sat in the cinema and which bar they went for a beer in afterwards — and in less than ten minutes can trace and contact the woman who was sitting two stools down. Public support for these measures is high, for the simple reason that they are working.

Of course, Foges could have pointed to China. China has melded artificial intelligence with surveillance technology to stop the spread of the virus. In some cases, just getting into your apartment or workplace requires scanning a QR code, writing down your name, ID number, temperature, and recent travel history. The social media sites WeChat and Weibo have hotlines for people to report on their sick neighbors, while Chinese companies use facial recognition technology that can detect elevated temperatures in a crowd or flag citizens not wearing a face mask.

China is also developing a social credit system that scores individuals down for violating trust — by jaywalking, for example, or making a reservation at a hotel or restaurant and then not showing up — and up for performing acts of charity like donating blood or performing community service. Millions of Chinese people have been denied tickets for airplanes or high-speed rail because they have been deemed “untrustworthy.” “Untrustworthy” people have had their personal information publicized, and their children have been denied entry to private schools and universities.

This is what giving social control over to the government looks like, and it is truly terrifying. Foges doesn’t bring this up, of course, but it’s not far removed from the “Big Brother” surveillance she desires.

The Chinese Communist Party is waging a propaganda campaign to blame the U.S. for the virus and brand any reference to Wuhan or China when discussing the virus as “racist.” This is the same Communist Party that repeatedly lied about the virus, suppressed information about it, and arguably violated international law by enabling a global pandemic.

This is also the same Chinese Communist Party that enacted the One Child Policy, is engaged in the imprisonment and torture of Muslim Uyghurs, and suppresses unofficial religions, including various forms of Christianity. This technology in their hands has terrifying implications.

It is indeed tempting to think that handing power over to the government can both save lives and restore the economy. But it is a Faustian bargain. Britons and Americans are rightly concerned about privacy on these matters, and a conservative prime minister’s former speechwriter should know better.