On Nov. 8, 2021, the American Heart Association (AHA) journals published the abstracts that researchers and clinicians would present during online scientific sessions beginning on Nov.13. The scientific sessions are rigorous events, and content must be submitted and selected. One of the abstracts published in the journal Circulation dealt with mRNA vaccines and cardiac health. When Twitter users tried to share the information in the abstract, people interested in reading it encountered a warning that it could be an unsafe link. 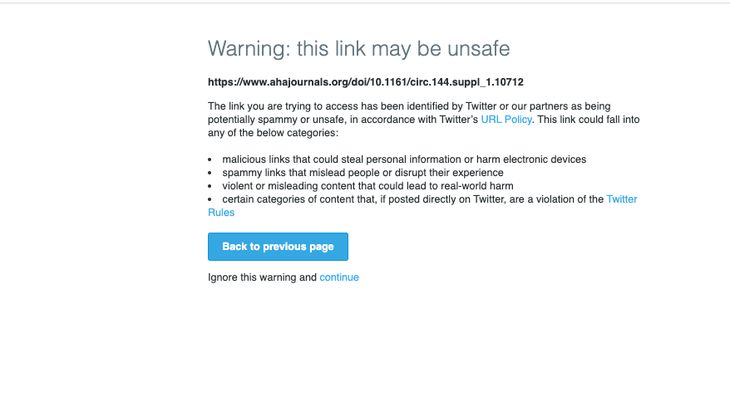 Astonishingly, Twitter content moderators feel emboldened to censor information published in a journal maintained by a well-respected, mainstream professional association. Further, the data appeared in a rigorous online conference for medical professionals. It also seems to provide a signal for potential vaccine side effects that are not terribly surprising and reasonably strong.

Dr. Steven R. Gundry of the International Heart and Lung Institute wrote an abstract that raised a concern about mRNA vaccines for COVID-19 potentially raising the inflammatory markers in the blood. Gundry’s group has been conducting a long-term study of the risk for a new Acute Coronary Syndrome (ACS). Patients in the clinic have received a clinically validated measurement of multiple blood protein biomarkers called the PULS score every 3-6 months for eight years. The study began before the pandemic and has accumulated a significant history for participants. But Twitter decided the information that the group found is dangerous.

An increase in the PULS score means the patient is at increased risk of suffering from a new ACS, an acute illness that impairs blood flow to the heart in the next five years. According to Gundry’s analysis, a PULS test drawn two to ten weeks after the second COVID-19 mRNA dose more than doubled the ACS risk from pre-vaccine levels. The researchers concluded that the mRNA vaccines might dramatically increase inflammation on the cellular lining of the heart and blood vessels and T cell infiltration of cardiac muscle. This type of inflammation may account for the observations of increased thrombosis, cardiomyopathy, and other vascular events following vaccination.

The FDA has already acknowledged the risk of myocarditis and pericarditis following mRNA vaccines. Both illnesses are cardiac diseases caused by inflammation. Gundry’s study signals the underlying cause of these illnesses and possibly other cardiac and circulatory side effects. The signal strength is decent and worth acknowledging and investigating for a few reasons. First, it involves 566 long-term subjects with a robust historical data set. Second, it reinforces information that the FDA has already provided to the public. A finding like this should be a part of the risk/benefit analysis considered by patients with their doctors.

Additionally, health bureaucrats and the media are pushing boosters. Researchers and regulators do not know if the potential for side effects from the vaccine is a cumulative risk. This would mean the risk of experiencing a side effect goes up with each additional dose. The PULS is a readily available test that researchers could deploy before and after giving booster shots to provide a partial answer to that question. Doctors have used the validated PULS test since 2013. Gundry’s group found the changes incidentally in the course of other research. Americans should expect our regulators and public health agencies to undertake a deliberate study and share the results.

The idea that Twitter decided that users should not view this information interferes with the public’s ability to hold our public officials accountable to investigate further. It also interferes with Americans’ ability to make a personal risk assessment about their healthcare. It is an astonishing amount of arrogance from Big Tech and could, as the company warns about the AHA link, lead to real-world harm.

Two researchers that have experienced censorship and public attacks for dissenting views on COVID-19 are Dr. Jay Bhattacharya and Dr. Martin Kulldorff. A recent article they authored at The Federalist described the errors in a hit piece about a think tank called the Brownstone Institute. In their conclusion, they wrote:

We think the politicization of medical news has led to increasing distrust in public health and medical professionals. If public trust in medicine is to be improved, trade publications have an obligation to provide accurate medical and scientific information from a variety of perspectives.

The first step should be to correct errors, a minimal obligation of all ethical journalism. A second step requires more balanced reporting about the pandemic by, for example, honestly reporting about the success of the pandemic strategies employed by Florida and the Scandinavian countries. The alternative is a continuing erosion of trust in medicine and public health.

Their criticisms apply to corporate media and social media as well as medical publications. Americans deserve the opportunity to read and evaluate sources themselves, especially when it comes to their families’ health.