Over $1 Billion Worth of Marijuana Seized in Largest Eradication Operation in L.A County History

On Wednesday, the Los Angeles County Sheriff’s Department, several other agencies, and political leaders held a press conference to detail a 10-day operation that took down approximately 40% of the illegal marijuana growers in the Antelope Valley. It was the largest single marijuana eradication operation in the county’s history: 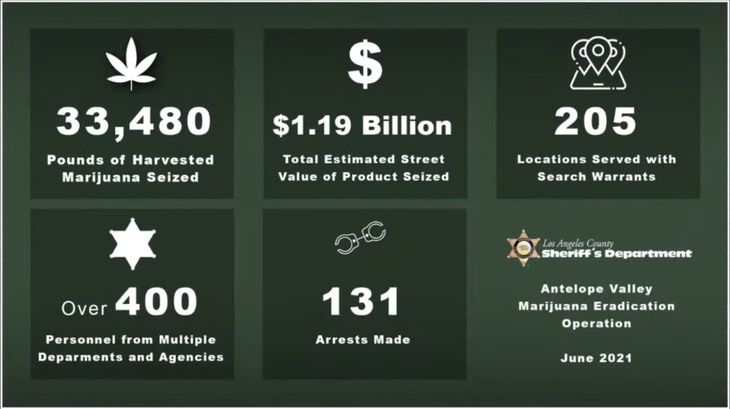 The Antelope Valley is an area in District 5 on the map of Los Angeles County. It is an area of high desert and unincorporated land. With a few towns and a lot of wide-open space with potato, carrot, and alfalfa farmers, it not what you conjure up in your mind what you hear “Los Angeles.” 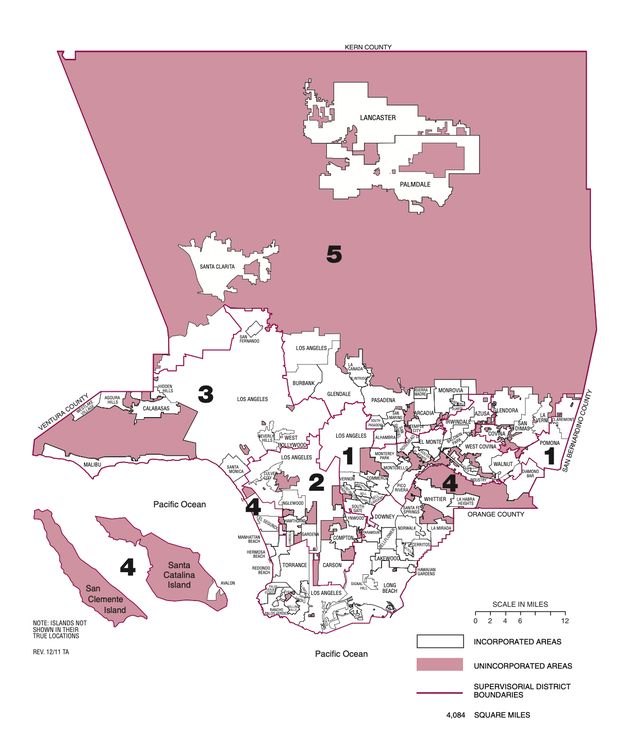 Los Angeles County Sheriff Alex Villanueva detailed the significant increase in illegal marijuana cultivation sites attributed to Mexican cartels and Asian organized crime groups. In 2020, aerial monitoring identified 150 illicit operations. In 2021, that number has increased to 500. The area has seen three murders since July of 2020, all linked to illegal marijuana operations and the cartels.

Related: Human Trafficking, Fentanyl, and a ‘Parallel Government’ at the Border

Each “farm,” a series of greenhouses, uses banned and highly toxic pesticides and chemicals that threaten the local water quality and environment. A biologist on the panel named a specific pesticide that could kill a bear with a quarter teaspoon. During the multi-day raid, enforcement officers found two dead bears, chemical spills, and environmental destruction. They also removed 180 animals, including 84 puppies and dogs that all need new homes.

Water theft is also significant. Each operation produces four harvests per year by tricking plants into thinking there are multiple day and night cycles in a single day. Each crop uses approximately 150 million gallons of water. Lancaster Mayor Rex Parris noted that the water table is shrinking and the ground is filling in. If this continues, it will threaten the livelihoods and livability of the area. Villanueva said at least two farmers would not plant next year because of the water theft.

Proposition 64 made marijuana legal in California as a highly regulated industry. Californians can grow up to six plants for personal use, but commercial growers, distributors, and retailers must be licensed, and there are taxes levied at every step in the supply chain. End users pay a 15% tax, and there are mandatory mark-ups in the supply chain.

Illegal growers undercut the legal business in several ways. In the Antelope Valley, they are seizing land from residents, stealing water from farmers who maintain their own water supplies, and using free labor from human trafficking operations. While they undercut legal producers in California because their operating cost is low and they pay no tax, established networks allow them to deliver their product as far as the East Coast.

Mayor Parris noted that this product in the market does not just damage the environment during the cultivation. It is also a grave threat to public health and public safety. Environmental experts are concerned about people and animals becoming ill from the toxic chemicals potentially entering the groundwater and being present in the marijuana. The growers are also armed and use weapons to intimidate residents into looking the other way or ceding land.

Villanueva noted a majority of those arrested were illegal immigrants, and there were 22 felony charges and over 100 misdemeanor offenses. He turned all of those arrested over to District Attorney George Gascón. Gascón is facing a recall effort for refusing to prosecute crimes or seek appropriate sentences. Villanueva noted that the DA has failed to prosecute human trafficking and sex crime cases in the recent past; he hopes the DA will do the right thing in this situation. All of the public officials agreed.

Representative Mike Garcia (R-Calif.) emphasized that this is not an ideological battle. He saw firsthand the threat to public safety and security while holding a town hall in the small community of Pear Blossom. An armed member of the cartel was seated right in front of him to intimidate the residents. Villanueva and his department need more money to continue to fight the problem, and Garcia is working through the Department of Justice to get a waiver on funding limits.

State Assembly Representative Tom Lackey (R-AD36) added that there was a tremendous amount of political pushback within the state to support the efforts to eradicate illegal marijuana operations. He noted that before Prop 64, California had let the illegal marijuana operations thrive and develop distribution channels. This lack of enforcement led to international cartels taking over that market and invading the desert when it became legal for Californians to open a legitimate marijuana business.

Well, you know this was an amazing operation. And it took courage. We’re talking about the cartels. We are not talking about mom-and-pop people selling marijuana that they grow in their backyard. This is the cartel. We are very, very close to driving down the freeway and seeing bodies hanging from the overpasses. That is what’s coming.

And if you have any doubt (lifts a rifle from the table) our citizens have to look at this part of the gun (indicates the front of barrel). That is happening. People are walking into their homes and telling them “You can either be nice or you can be mean and so can we. They are being threatened at every opportunity. A United States congressman is having a town hall and a cartel member with a gun is on the front row? What have we become and how has that happened to us?

He went on to assert that it was for one reason. The only county supervisor at the meeting supportive of the eradication operation was Kathryn Barger, from District 5. The remaining supervisors denied county equipment and resources for the law enforcement agencies. Instead, the small towns in the area provided them. Parris pointed out that the haul from the bust was $1.2 billion, which could buy many lobbyists.

Parris then reiterated that he was not sure Gascón would even file charges. Commissioner Barger is alone in the fight for resources and continued law enforcement action, according to Parris. He challenged the press to find out why. Villanueva said enforcement operations would continue in cooperation with the surrounding five counties. Nearby San Bernardino County has 850 illegal marijuana operations. With continued enforcement, the sheriff predicts the cartels will move to indoor growing in warehouses and homes.

Villanueva noted that the cartels have purchased and gutted homes worth millions of dollars to grow indoors. This trend would push violent international crime organizations used to intimidating local officials and law enforcement officers in their home country closer to densely populated areas in Los Angeles.