Talk about taking sins of the father to a whole new level. It was reported by Tucker Carlson last night that Officer Garrett Rolfe’s stepmother, Melissa Rolfe, was fired from her position as Human Resources Director at Equity Prime Mortgage LLC in Atlanta.

Tucker Carlson reports that @Equity_Prime Mortgage in Atlanta has fired the step mother of police officer Garrett Rolfe, who was charged in the shooting of Rayshard Brooks. pic.twitter.com/RtJhNyyd2F

This is where this country is going. it is becoming a place where you can be punished for the supposed misdeeds of your relatives. You don’t want to be that country.

At the end of the show, the host said he had received a statement from Equity Prime Mortgage. The company asserted Rolfe had made social media posts without specifying the content that violated policy. Then there was a long statement about the company’s support for diversity.

The company probably should have consulted a crisis management public relations firm before reacting to the segment on Carlson’s show, because the statement they posted on Twitter has the potential to cause them some serious headaches. 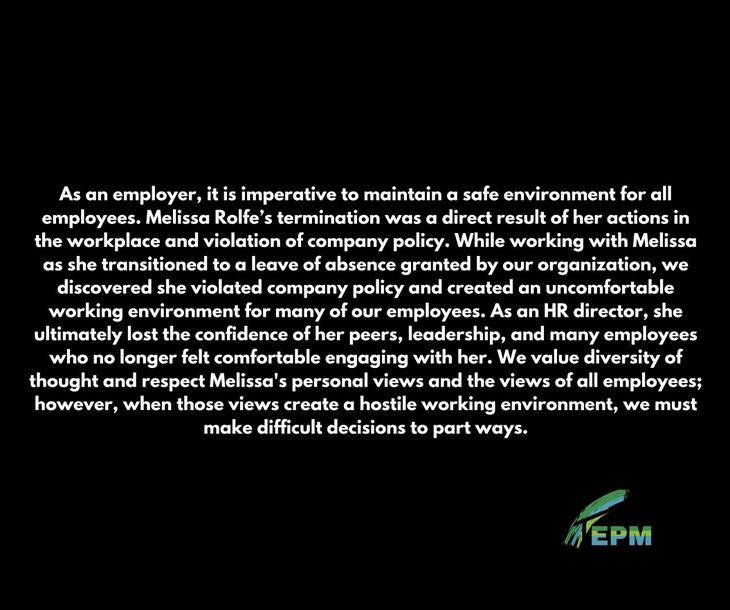 Rolfe was on a leave of absence granted by the company when she was terminated. They do not say what the violation of policy was, but accused Rolfe of creating a hostile work environment. In addition to needing a crisis PR firm, they also need an HR professional here. But they fired theirs. Having been one for 15 years, there a few things to note.

First, public comment on grounds for termination of an employee is taboo. Every company I have ever worked for had a policy that when contacted regarding a previous employee, all the human resources department would provide was confirmation that the employee worked for the organizations and the dates they were employed.

Next, Equity Prime Mortgage alleges Rolfe’s views created a hostile work environment. This is governed by a body of law and precedent under Title VII. According to the EEOC, which administers Title Vll, a hostile workplace is created through behavior on the part of the employee that would be defined as harassment:

Harassment becomes unlawful where 1) enduring the offensive conduct becomes a condition of continued employment, or 2) the conduct is severe or pervasive enough to create a work environment that a reasonable person would consider intimidating, hostile, or abusive. Anti-discrimination laws also prohibit harassment against individuals in retaliation for filing a discrimination charge, testifying, or participating in any way in an investigation, proceeding, or lawsuit under these laws; or opposing employment practices that they reasonably believe discriminate against individuals, in violation of these laws.

It would have been impossible for any behavior exhibited by Rolfe while on leave of absence to meet this standard.

Petty slights, annoyances, and isolated incidents (unless extremely serious) will not rise to the level of illegality. To be unlawful, the conduct must create a work environment that would be intimidating, hostile, or offensive to reasonable people.

Offensive conduct may include, but is not limited to, offensive jokes, slurs, epithets or name calling, physical assaults or threats, intimidation, ridicule or mockery, insults or put-downs, offensive objects or pictures, and interference with work performance.

it is important to note that finding “reasonable people” in this cultural moment is a challenge. However, support for law enforcement does not meet any of the standards above. Support for her stepson specifically is not a radical or out-of-mainstream view. There are a significant number of law enforcement experts who conclude Officer Rolfe’s actions were a justified use of deadly force. Here is former officer Brandon Tatum making the case:

Unfortunately for the company, their knee-jerk reaction to national exposure made the situation far worse. Their language makes it clear they caved to the woke interns just like the New York Times and others in the past three weeks—people who cannot tolerate opposing mainstream views, mostly because they do not possess the intellect or the ability to defend their ideas. They simply say they feel “unsafe” and expect action.

The situation Equity Prime Mortgage LLC finds itself in demonstrates my fear for corporate America generally. I went into Human Resources to assist company leaders in building a talented, productive, well-trained, and properly motivated workforce—not to monitor the company for ‘wrongthink’ or function as the thought police.

The absolute cowardice of corporate leaders at this moment will be a tragedy for many companies. Focusing on social-justice warrior needs rather than producing a superior product or service to serve all customers is a wildly short-term view.

Ask Gillette. Following an ad chastising men for “toxic masculinity,” Procter and Gamble took an $8 billion write-down on the brand. P&G blamed disruptive competitors like Harry’s and Dollar Shave Club for disrupting pricing. What they didn’t note is that these companies don’t try to shame their core customers to satisfy a political agenda.