Masks Made in America by an All-American Company

BRISTOL, Tennessee — There is not one thing in the jeans, flannel-lined jackets, denim jackets, overalls, shirts, carpenter pants, custom uniforms or masks produced by L.C. King Manufacturing that is not made in America.

Nothing — not even the threads or the rivets.

“We pride ourselves on providing the customer a 100% made-in-the-USA, workwear garment that we cut and sew,” King says with the pride of someone who has earned it.

They have two brands, Pointer Brand and their trademark, L.C. King, and four kinds of customers: “We have your typical internet retail customer that goes directly to our website. We also have mom-and-pop wholesale customers for the mom-and-pop retails, general stores that still exist primarily in southeast USA. Thirdly, we have city boutiques that carry our stuff for the hipster seeking a unique garment that is not fast fashion. And then our fourth customer is industrial, where we make a coverall or workwear garment for that particular facility.”

When the coronavirus hit, King sprang into action the only way he knows how: making things. This time, it was masks. As he sees it, it’s a great story. And he’s not wrong.

“Our local electric company … called me up and said, ‘Jack, we need a face mask for our electrical installers in Bristol, Tennessee. They have an idea of what they want it to look like,'” he said. “I called up one of my sewers and asked her to meet me here at the factory. She met me here, and we made one.”

“After we made it three different times, the electric company signed off on it then said, ‘We would like to buy 500.’ You see, it just so happened that I had this fabric we were going to make shorts for a customer that canceled their order, so I had this fantastic 100% cotton, blue twill that you can make a face mask out of. I called up four of my sewers back into the factory, and these four sewers made these 500 face masks for the electric company.”

This was the ultimate repurpose during an era that has strained our normally purpose-driven lives.

He posted the blue twill masks on Instagram, and within moments, people commented asking how they could buy them online.

“I thought to myself, ‘Well, we always overmake’ … so we said, yes,” he said. “I allowed the people to buy it on our website, and all of a sudden, I had to call two more workers back because this face mask has just exploded onto the scene. We have sold over 7,000 face masks over the internet to people around the country, to individuals, to businesses.”

These are 100% American-made face masks made in the same factory his grandfather founded in 1913 in the foothills of the Appalachian Mountains, in the now-historic building on the corner of Shelby Street and 7th Street in downtown Bristol.

Long before the coronavirus hit, Americans had desired everything from clothing to cars to military components to toys to iPhones to medical products to be manufactured on our soil.

Sixty percent of respondents in one poll said they would “buy American” even if they had to pay more.

As far back as 11 years ago, during the depths of the Great Recession, when Pew asked voters their sentiments on requiring spending in the stimulus plan to be limited to American-made goods, it was very popular. Only 24% believed Buy American provisions would be a bad idea, and the issue was remarkably not politically divisive. Democrats (70%), Republicans (66%) and independents (63%) strongly supported such measures.

In the early days of the pandemic, when hospitals were on a hunt for surgical masks to protect doctors and nurses, the public soon realized that half of the world’s masks were made anywhere but here, mostly in China.

So far, no polling illustrates whether public sentiment has shifted to even stronger support for American-made products, but you have to imagine it certainly hasn’t shifted toward relying on more products from China, given the shortages we’ve faced.

“We were just completely caught off guard by the popularity of this face mask,” King said. “The reason it is popular is because it actually ties around the head, and it doesn’t have elastic around the ears, because everyone’s complaining about that hurting. The second thing about it is it’s 100% cotton and is washable. You can actually wash it at your house and continue to wear it throughout the week — that kind of thing. It stays sterile that way.”

“And it’s made in Tennessee,” he said. “We were able to get a fantastic shipping rate through FedEx, so we can get the masks to the customer between two and three days nationwide, and we’re real thankful towards them.”

King continued: “Because of all that, we were able to really stay in business and prepare for us to open … (A)ll 17 employees came back because of this face mask that we’ve been able to sell to the general public.” 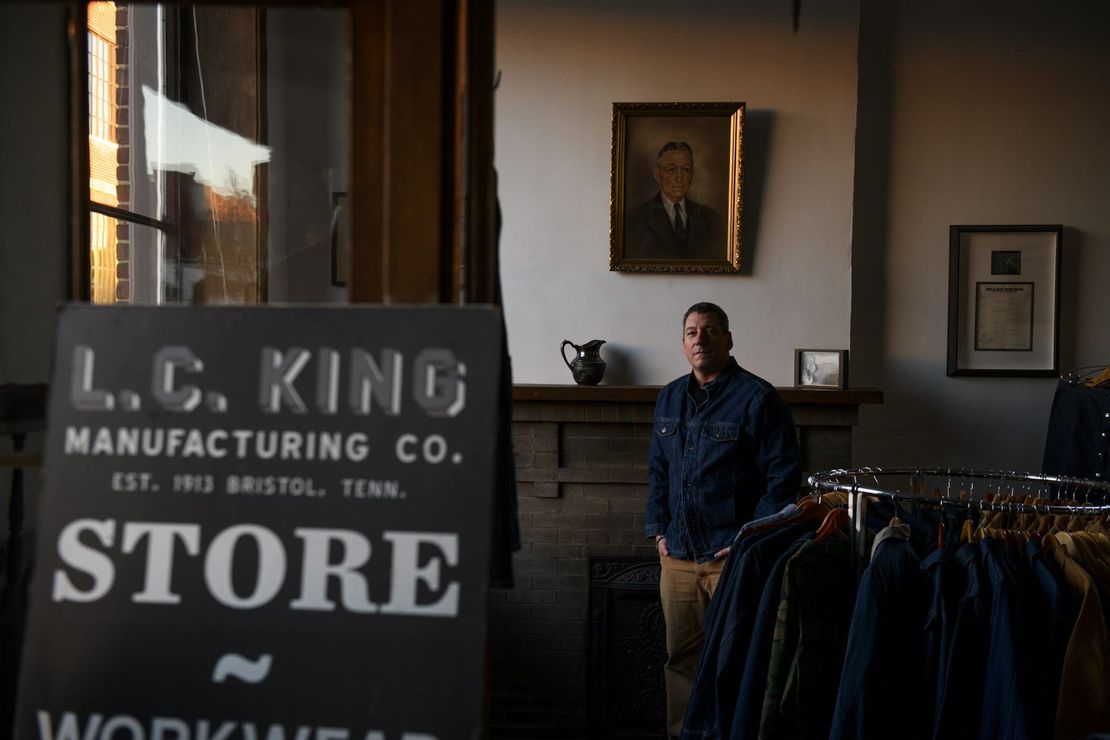