BRISTOL, Tennessee — April’s race weekend came and went with no one filling the steep stadium stands of one of the largest sports venues in the world; no one standing proudly to sing “The Star-Spangled-Banner”; and no hushed anticipation before the most famous words in motor sports, followed by the roar of the engines that power some of the fastest cars in the world.

Like most sporting venues in the United States and around the world, the magnificent beauty that is Bristol Motor Speedway has yet to open its welcoming arms and high banks to fans and drivers as it has done every year since the summer of 1961. In March, NASCAR suspended operations, postponing the Cheddar’s 300 and the Food City 500 that were both set for the weekend of April 4.

With the speedway turns banked up to 28 degrees, NASCAR speeds can surpass 130 mph even though the track is only a half-mile long. Drivers have said racing there is like flying a jet fighter in a gymnasium. With its high grandstands (capacity 162,000) surrounding the entire track, a rarity in motorsports, one of the track’s many nicknames is the “Last Great Colosseum.” The frequency of crashes and out-of-car clashes between drivers helps it live up to that name.
Bristol is like Elvis, explained local track historian and race announcer David McGee. It is so identifiable that it only goes by one name, and tickets are so revered they are often included in divorce settlements and family estate settlements.

It’s a place that draws the haves and have-nots from all over the country to fulfill a bucket list dream or a yearly pilgrimage. People begin arriving three weeks before the spring and summer races to spend their time in the campgrounds that hug the track exterior.

Gathering with family and friends old and new, and forming bonds that last for generations of racegoers, is part of the Bristol rite of passage.
Over the years, it has opened its skyboxes for local students to attend class when their classrooms were overcome with black mold; hosted the occasional football game for both the pros and college players; and turned its facility into an annual health care clinic for Appalachians in need of dental, medical and vision care as part of the Remote Area Medical program.

The track’s five campgrounds were once part of a dairy farm. The areas are so large that, over the years, they’ve welcomed displaced victims of Hurricanes Irma, Florence and Dorian.

Speedway Motorsports, which owns Bristol and seven other major racetracks in the U.S., laid off 180 employees and furloughed 100 others during the NASCAR coronavirus shutdown.

Beth Rhinehart, president of the Bristol Chamber of Commerce, said that no data exists on the economic benefits the racetrack has on the region, but she is sure it is bountiful — just consider the 160,000-plus attendees and race team employees who make use of the region’s restaurants, bars, hotels, motels and campgrounds. When visitors are not at the racetrack or campground, they can also take in Bristol’s State Street (with Virginia on one side and Tennessee on the other), the Birthplace of Country Music Museum and Boyce Cox Field, home of the Bristol Pirates in the Minor League Baseball Appalachian League.

The roots of racing in America run deep. NASCAR was the legal result of a very illegal way of escaping the law during Prohibition, formed by bootleggers who dodged federal agents and local police in the dead of night along back roads, with illegal whiskey in their floorboards and fearlessness in their souls. The legacy of those fearless Prohibition runners turned into the inspiration for stock car racing, which turned into NASCAR.

For now, the NASCAR Cup Series is returning at Darlington Raceway on May 17. There will be no spectators there, no one to cheer when “Start your engines” is declared. But the engines will roar, and the drivers will race for 293 laps (400 miles). The race will officially be known as The Real Heroes 400 to honor the front-line health care workers who are helping the nation through the coronavirus pandemic.

On May 14, NASCAR announced its second wave of rescheduled races, with Bristol making the cut. The “minor league” Xfinity Series will race 160 miles on May 30, with the premier Cup Series racing 266 miles the next day. But despite Tennessee’s partial reopening, the races will be held without fans.
“It’s the bittersweet part of this, we’re excited to be able to host racing but we’re gonna miss all those fans who aren’t here,” Bristol Motor Speedway General Manager Jerry Caldwell told local news channel WJHL.

Bristol, for now, sits as silent as it did in 1960, when it was still a dairy farm — waiting like the rest of us to welcome its family back home.
(SET IMAGE) 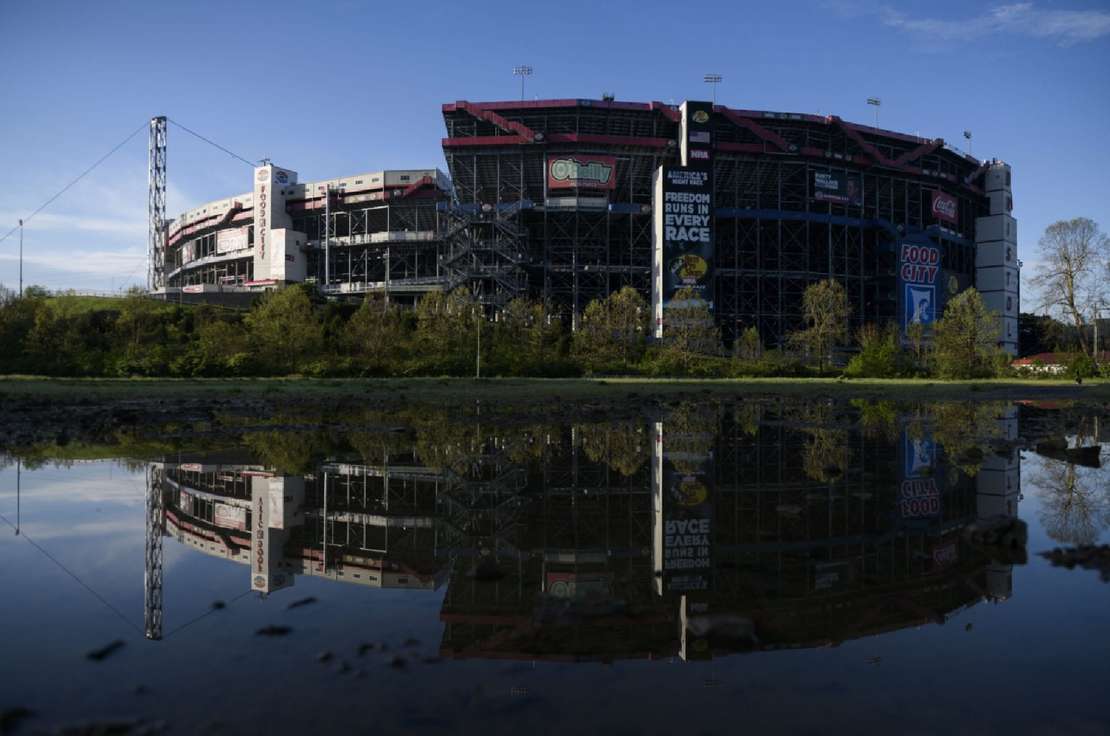 The Bristol Motor Speedway is reflected in a puddle at the camping site on May 2. Photo credit Michael Rayne Swensen.