It's Been a 16-Year Wild Ride at PJ Media

The year was 2005. George W. Bush was in his second term as president, and the Iraq War was well into its second year—just a few years after the 2001 terrorist attacks. Harry Reid was Senate majority leader, and Denny Hastert was speaker of the House that year. And Roger Simon and Charles Johnson launched Pajamas Media, which would later become PJ Media.

The word “blog” was only a few years old then. Five years earlier, there were only about two dozen blogs on the internet, but by 2005 that number had exploded to nearly 50 million. I don’t think that anyone could have imagined the changes we’d see over the next 16 years, not only in the news and political landscape but also in the evolution of online media. Pajamas Media was an upstart at the time, challenging the Goliaths in the mainstream media who thought they were too big to fail. They had money, power, prestige, arrogance, and a sense of entitlement. And they weren’t watching their backs.

Simon and Johnson launched Pajamas Media in the wake of the “Rathergate” scandal — where Real Journalist and CBS anchor Dan Rather used forged military documents to try and smear George W. Bush. In the wake of the embarrassing episode, CBS apologist Jonathan Klein made a snarky comment about bloggers in their pajamas writing without editorial oversight. Thus the name Pajamas Media was born.

PJ Media started out as a bunch of disconnected blogs — many early posts were short and pithy, something more akin to what you’d see on Twitter today, if you’re one of the Chosen Few blue checks who haven’t been banned. [Note: I recently wrote about PJ Media being locked out of our Twitter account until we agree to delete a tweet that truthfully acknowledges that Joe Biden’s transgender assistant secretary for health, Rachel Levine is a man. You can’t speak a simple biological truth like that on social media anymore, but we can and do say it in our members-only VIP section, where the language police don’t have a say. That’s one of the many reasons we love having member-supported content.]

Here’s an early VodkaPundit entry that I’m sure will bring a tear to his eye (I didn’t warn him that I’d dug this up): 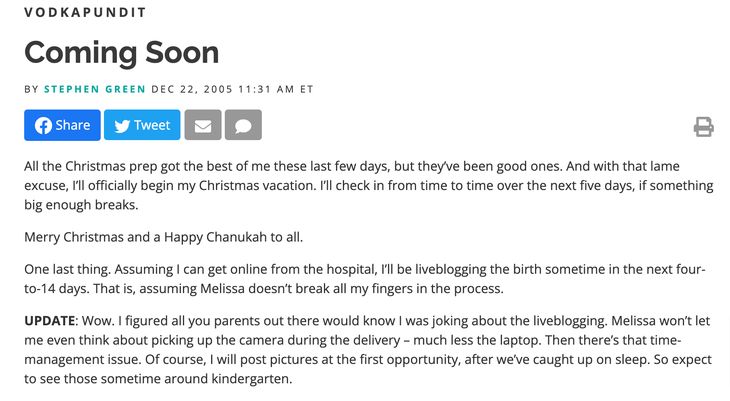 And you can read an early Richard Fernandez post — his first, in fact — here. I’m most struck by the consistency when I read through some of these old pieces from our early contributors. As an editor, you get to a point where you can pick your writers out of a police lineup based only on their prose. If you put a 2005 VodkaPundit or Belmont Club post in front of me, I’d be able to identify it immediately. That consistency is why so many of you have been loyal readers for so many years — and the reason many of you are willing to pay to get premium VIP content written just for our members.

PJM veterans love to tell the story about how PJTV launched in 2008 at the Republican National Convention. Back then, almost no one was doing live online video. PJTV had some big names scheduled for interviews and panel discussions, but convention organizers had stuck the team in a tiny out-of-the-way booth. Then, fortuitously, after a major news organization pulled out, that little startup operation ended up in the center of media row with all the big players in mainstream media. Roger Simon described it as a “madhouse” because “no one had ever done a broadcast through the internet for a political convention before.” It was groundbreaking stuff—and ahead of its time by a decade. Every time I think of PJTV, I’m reminded of Marty McFly’s quote in “Back to the Future” after his performance of “Johnny B. Goode” fell flat at the school dance: “I guess you guys aren’t ready for that yet. But your kids are gonna love it.”

While PJTV had a very loyal fan base—how could it not with stars like Stephen Green (VodkaPundit) and Stephen Kruiser—the technology hadn’t yet evolved enough to allow for easy streaming and podcasting. It required expensive equipment and studios, and people were not yet accustomed to paying for content online. Now, anyone with a cell phone and an internet connection can podcast or post video online, but in 2005 the technology was still in its infancy. PJTV eventually shut down, but the spirit of it lives on in our podcasts and members-only VIP live video chats—starring Stephen Kruiser and Stephen Green, as fate would have it.

Two years ago this month we launched our VIP program for readers who want to support our work and mission. To all of you who have joined us as members, we’re incredibly grateful. Your support enables us to do this work fearlessly and unapologetically, despite the censors always lurking about trying to find a way to shut us down. It’s been so gratifying to see your willingness to partner with us to fight the left’s lies, disinformation, and radical attacks on our way of life. We could not do this without your support.

For the price of a cup of coffee every day, you get exclusive content from VodkaPundit, Richard Fernandez (check out his new members-only “Signal to Noise” report), and the rest of the PJM team. Over the last year, our members have benefitted from articles that the gatekeepers at Facebook and Twitter don’t want you to see, like reporting on Hunter Biden’s laptop, the truth about the COVID-19 pandemic and the vaccines, stories about the radical “defund the police”movement, the Zuck Bucks scandal, and the malfeasance and corruption of the Biden administration. And with your help, we’ll continue to bring you truthful, accurate reporting and commentary about the stories you care about and issues that make a difference in the life of your family. Sign up here to become a VIP member today.