We knew this would eventually happen. Twitter has locked PJ Media’s account and is demanding that we delete a tweet that told the truth about Rachel Levine’s gender. You remember Levine. He’s Joe Biden’s transgender assistant secretary for Health for the U.S. Department of Health and Human Services and, if you believe the Washington Post, the “first-ever female four-star admiral” in the U.S. Public Health Service Commissioned Corps.

PJM’s Matt Margolis took issue with that claim in an article titled: “Rachel Levine Is Not the ‘First Female Four-Star Admiral’… Because He’s a Male.” He wrote:

Even if you believe that gender is a social construct and subject to how one feels and not dependent on biology, sex chromosomes determine whether an individual is male or female. Rachel Levine is 100 percent male, right down to his DNA. He is not a female. He may have grown his hair out and changed his name to a woman’s name, but that doesn’t make him a female.

Most reasonable people would not quibble with that statement. “Science” certainly wouldn’t. But we’re not living in a reasonable age, and “science” has been co-opted by those on the Left who would have us believe that 2+2=5 and that a man can become a woman by pumping himself full of hormones and hacking off his ding-dong.

When Matt tweeted out his article, his Twitter account was promptly locked. When PJ Media tweeted it out shortly thereafter, our official account was also locked. 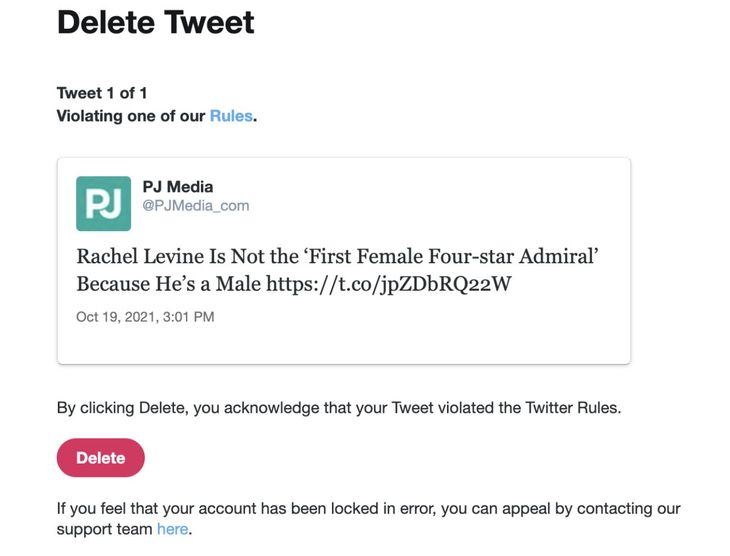 Twitter made it clear that in order to access our account we would have to delete the offending tweet, thereby admitting we had violated a Twitter rule, purportedly the one that bans “misgendering people.” You can read all about it on their page outlining what it considers to be “hateful conduct.” Misgendering is lumped in with death threats, references to mass murder, and Nazi imagery. (It’s funny that you never seem to hear leftists complaining about being banned from Twitter for calling for Trump’s death or for attacking Christians and Jews. I wonder why?)

Related: I’ve Been Suspended From Twitter for Stating a Biological Fact

Whatever, right? It’s their platform, they make the rules. People keep asking me why we have exclusive member’s only articles. This is why. VIP members don’t have to worry about Big Brother scrutinizing our every word or turn of phrase and bringing the ban hammer down on us. We can speak openly, have adult discussions, and debate issues without fear of censorship there.

But the fact that Twitter is being so aggressive in forcing everyone to conform to the Left’s insane narrative on this particular issue should trouble all Americans. It troubles me when I think about the world my grandkids are growing up in. Will they be denied jobs, college entrance, or access to financial aid if they refuse to bend the knee to the woke mob? Or worse, will they be locked up for speaking the truth about issues like gender that are foundational to their faith? It’s a scary time. I never thought I’d see this in the United States of America, yet here we are.

As depressing as all this is, I haven’t given up hope. Theologian and Christian apologist Francis Schaeffer coined the term “true truth” to highlight certain ideas that are inalienable and not up for debate because they originate with God, not man. “Truth carries with it confrontation. Truth demands confrontation: loving confrontation, but confrontation nevertheless,” Shaeffer wrote. “If our reflex action is always accommodation regardless of the centrality of the truth involved, there is something wrong.”

We’re not here to accommodate those who want to destroy us and erase our country’s Judeo-Christian history and heritage. We’ll continue to tell the truth about gender and all the other important issues of the day.

In 21st-century America, truth is considered a revolutionary idea. Maybe it’s always been that way. But now, more than ever, we need to stand up to the bullies who would force us, maybe at gunpoint in the near future, to lie and to parrot their preferred narrative. We owe it to our kids and grandkids, and to future generations, to tell the truth. We don’t want to look back and say that we lost our freedom because we feared confrontation or retribution or a reduction in clicks.

We’ve sacrificed a lot of revenue over the last few years because we refuse to cave to the social-media censors, but we will continue to tell the truth. If you want to support us in this mission, please consider becoming a VIP member. For the price of a cup of coffee per day, you can partner with us to make sure the Left isn’t the only voice out there.