Happy Friday everyone! I hope your week was excellent and that you got outside and enjoyed something other than whatever is on your smart devices. The sun came out for the first time in a while here in upstate New York and it made me glad to be alive again. The layers of snow have melted a bit and grass is starting to peep out to say hello. I’m in no doubt that we’ll be buried again soon, but for now, it’s a welcome relief.

Did you see this incredibly weird sunrise the other day? Is the simulation breaking down? Maybe one of you scientific types can tell me what happened here. It’s not a camera trick, I saw it with my own eyes and it looked just like the photo—the sun is shooting what looks like a flashlight beam straight up into the air. I’ve never seen this before and would love to know what caused it. I’m voting for a simulation glitch.

Someone not monitoring the simulation properly. Sun's busted. pic.twitter.com/fyTO5UZJa3

Whatever it was, it was gorgeous. What a view to wake up to, eh? I truly love the state of New York. Its beauty is rivaled only by Hawaii in my estimation. It’s a shame there’s nobody sane running things here because it’s sure God’s country.

There’s good news for international travelers. Stonehenge is reopening! So if you’re planning to visit, it seems you’ll be able to take photos and marvel at the druid ruins (or whatever they are).

English Heritage plan to reopen Stonehenge on the 12th April. Full details will be announced on 5th March. Tickets must be booked in advance. #GoodNews🔓 pic.twitter.com/WkYx0bOrFL

The stories coming out of Texas aren’t all bad, and this one is going to make you tear up with the knowledge that people are mostly good and love one another. This special story of strangers becoming roommates in an emergency is just the best thing I have heard in a long time. When Chelsea Simmons got stuck in Nina Richardson’s and Doug Condon’s driveway delivering groceries to them and a tow truck could not come to help her, the couple put her up in their guest room until it was safe for her to drive home. They cooked for her, she baked for them, and the strangers became friends.

“One day just kind of led to the next and we kept playing it by ear and if she wasn’t going to get any help from a towing company we certainly weren’t going to put her back on the road until it was safe,” said Condon.

This is how people care for one another when there aren’t agitators stirring up trouble. Don’t believe the hype. Your fellow Americans love you.

This family in Texas took in a delivery driver for 5 days after she got stranded in their driveway during the winter storm pic.twitter.com/ynFdxmG7Ms

The AP reported an unbelievable story about a lost cat.

A cat that went astray about 15 years ago has been reunited, older and maybe wiser, with its owner.

Brandy, a brown tabby, was reunited Monday afternoon with Charles, who adopted her as a 2-month-old kitten in 2005.

“I saw her, I picked her up and she started to purr and it was very emotional,” Charles said. “It was nice to have her in my arms again.″

”I did break down and cry because I thought about all of the years I lost from her,” he said.

Brandy was found Sunday in Palmdale, about 40 miles (65 kilometers) from where Charles lives in the San Fernando Valley area of Los Angeles.

I’m not a cat person but that’s a great story.

Did you know that when you go to the eye doctor now they are skipping dilation drops for that test to check for macular degeneration because of COVID—they want you in and out quickly. Instead, they’re doing retinal imagery and it’s one of the coolest things I ever saw. I made the doctor tell me every detail about what we were looking at. But what struck me immediately was how much the retina looks like images from the Hubble telescope of deep space. I was so fascinated by these images. The eye is such an amazing and complicated organ. If you want to see what your eyes look like on the inside go get an eye exam! It’s probably time anyway. 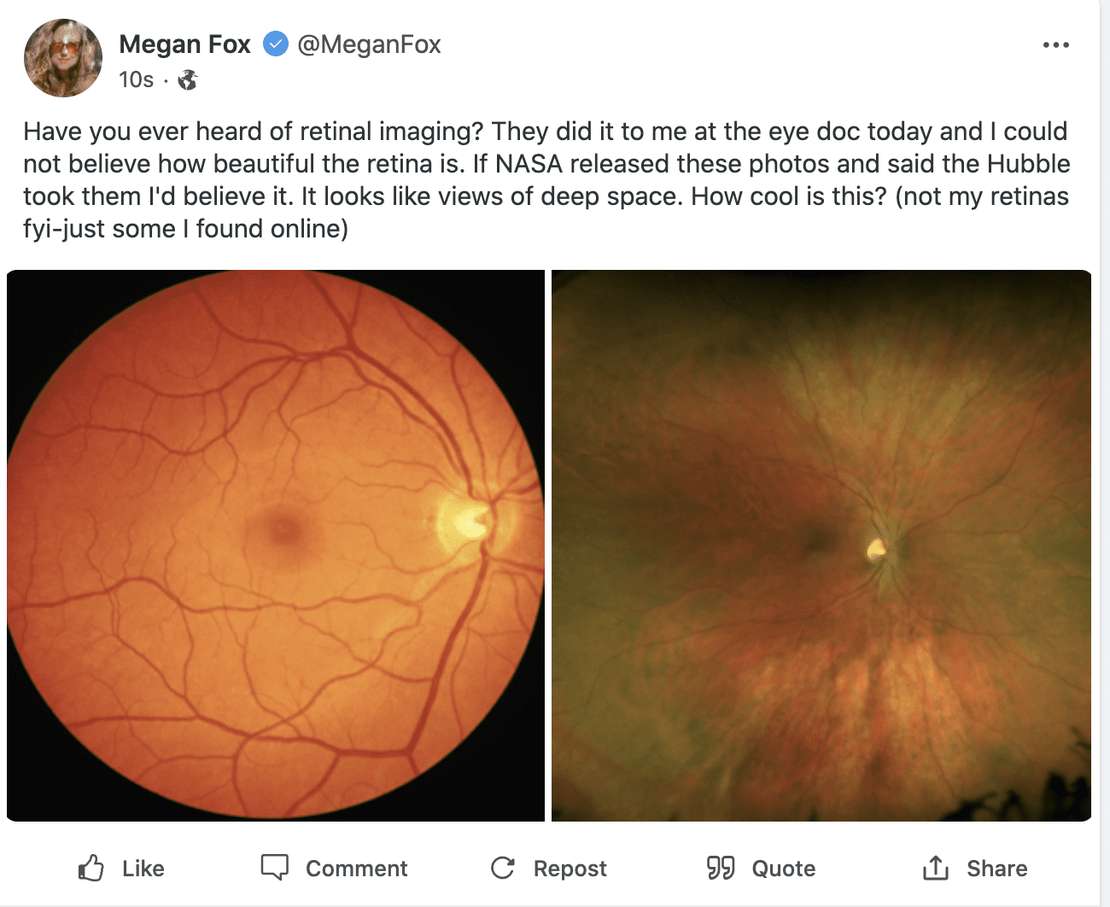 And finally, I thought I’d share with you a video that I rely on almost daily to block out distraction while I’m working. COVID forced many DJs whose entire job consisted of performing for large crowds into unemployment. But many of them found a way to entertain their fans in a new way, and the mobile DJ experience with drone footage of amazing places was born. I hope you enjoy this as much as I do. Headphones required.