Fact Check: Hurricanes Are Not Strengthened by Our CO2 Emissions

Over the past week, media across the world have proclaimed 2020 a record year for hurricanes in the North Atlantic. The culprit? Man-made climate change, of course.

But this is a mistake, not only because the “records” are misleading but also because the causes of hurricanes are natural phenomena over which we have little or no influence.

The network quoted Penn State University meteorologist Michael Mann, who went even further, asserting that “The impacts of climate change are no longer subtle. We’re seeing them play out right now in the form of unprecedented wildfires out West and an unprecedented hurricane season back East.”

“Things will only get worse if we continue to burn fossil fuels and generate carbon pollution. This current hurricane season lays bare the reasons we must act on climate now,” he added.

Other media sources put the primary blame squarely on man-made global warming, which supposedly has made the Gulf of Mexico warmer and the air more humid thereby making tropical cyclones—called hurricanes in the North Atlantic—more frequent and more intense.

But this is misleading. Dr. Roy Spencer, a principal research scientist at the University of Alabama in Huntsville, explained that “major hurricanes don’t really care whether the Gulf [of Mexico] is above average or below average in temperature.”

Similarly, M. Mohapatra and V. Vijay Kumar of the India Meteorological Department state in their March 2017 research paper that “there is a decreasing trend in the tropical cyclone number over the North Indian Ocean in recent years, though there is an increasing trend in the sea surface temperature.”

So, if not primarily temperature, what does make one hurricane season worse than another?

This year the sea surface temperature of the Atlantic Ocean has indeed been relatively high (contributing to Dr. Gray’s factors #4 and #6 above) since we are in a warm phase of the natural Atlantic Multidecadal Oscillation (AMO). But the AMO’s origin and the mechanisms directing it are as yet unknown.

Low wind shear (Dr. Gray’s factor #3 above) also played a significant role in this year’s active hurricane season. Wind shear is a natural phenomenon that varies across the globe and is determined by a host of meteorological factors, none of which are under human control. For example, this year’s La Nina event resulted in cool dry air in the Eastern Pacific Ocean with associated relatively high wind shear and so fewer tropical cyclones there. However, La Nina also resulted in low wind shear and trade winds in the Atlantic, thereby allowing more storms to build up into hurricanes.

Regardless, the supposed records being set are, in fact, suspect. Joe D’Aleo, co-chief meteorologist at Weatherbell.com said, “Not every meteorologist believes 2020 holds the record for most named storms. Due to advances in technology, forecasters are able to identify smaller subtropical storms that may have gone unnoticed in the past. Some of this year’s storms should not have been named or would not have been in previous years.”

Christopher Landsea, chief of the tropical analysis and forecast branch at the National Hurricane Center, was cited in the New York Times as saying, “There has been a lot of hype about the record number of storms and, yes, it’s been a busy year. There have been horrific impacts. But is this really a record? The answer is no.”

D’Aleo points out that this conclusion is supported by the trend in annual North Atlantic Accumulated Cyclone Energy (ACE, a metric used to express the energy of tropical cyclones during a period of time). The following graph shows that 2020 was 13th in ACE levels since 1851. 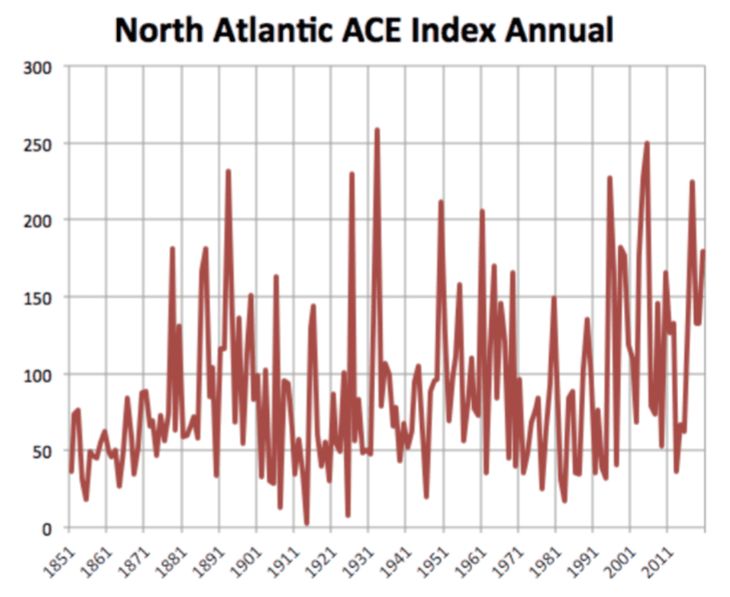 Commenting on the fact that the ACE trend in the Pacific is only 50% of normal in 2020, D’Aleo said, “For the northern hemisphere [it] was 80% of normal. So even with the hyper Atlantic season. GLOBALLY we were BELOW average.”

Next D’Aleo showed the following graph of landfalling (on the continental U.S.) hurricanes, and concluded that “the decadal trend for landfalling hurricanes and major hurricanes has been down.” 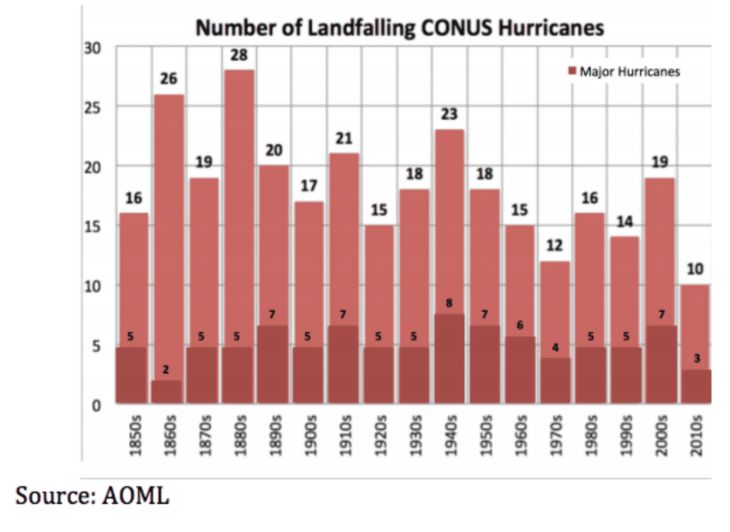 The global warming/hurricane connection completely falls apart when one looks more closely at the observational data.

For example, it was during the 1945-77 global cooling period, when ocean temperatures worldwide were undoubtedly lower than today, that we witnessed stronger hurricanes than now. For example, Hurricane Camille, the second-most intense tropical cyclone to strike the U.S. on record, slammed into Mississippi as a category 5 (the strongest) hurricane on August 18, 1969, producing a storm surge of 7.3 meters.

The most powerful tropical cyclone on record worldwide was not recent either. Immediately following a cooling period, the 2,200 km-wide “Super Typhoon” Tip, the strongest ever, made landfall in southern Japan on October 19, 1979 (Irma was 680 km across; Harvey 400 km). And the deadliest tropical cyclone was in the Bay of Bengal November 12-13, 1970, when the earth’s mean temp was decreasing. Sadly, it killed an estimated quarter-million people in East Pakistan, which is now Bangladesh.

According to the World Meteorological Organization, the biggest storm surge worldwide was 13 meters at Bathurst Bay, Queensland, in 1899. Some contemporary accounts assert the surge was 14.6 meters, or almost the height of a 50-story building. During the warmer 20th and 21st centuries, no tropical cyclone was strong enough to generate a surge greater than 10 meters.

The fact that hurricanes and other tropical cyclones are not caused, or even significantly enhanced, by man does not give us an excuse to do nothing about them, however. Florida and Texas need to engage in “vertical evacuation” by building multistory storm shelters that allow residents to take refuge above the storm surge, instead of today’s ineffective “horizontal evacuation,” forcing people to flee the waves on clogged highways. The U.S. should look to India’s storm shelter network for an example of success in this regard—no one need walk more than one kilometer anywhere on India’s coast to get to a shelter. If India can afford it, why not the U.S.?

It is time to develop improved early warning systems and more storm shelters. Concerning ourselves with carbon dioxide emission reduction is a wasteful distraction and will have no impact on future hurricane strength or frequency.