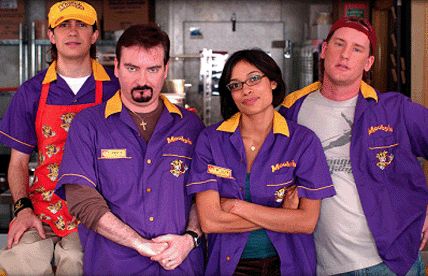 Crappy service from saracastic disinterested losers is only funny in the movies.

One of my worst pet peeves is bad food service, particularly at a fast-food restaurant. The difference in price between fast food and a sit-down family restaurant is often negligible, and the quality is generally inferior. So the value in fast food compared to other options is entirely in its being delivered fast and accurately. Yet all too frequently we spend far longer waiting for fast food than it is worth, or pull away from a drive-thru only to discover down the road that our order is wrong.

In my experience, Chipotle has always stood out as a remarkable exception to this trend. The Mexican grill would prefer to be called a “quick-casual eatery,” perhaps in an effort to differentiate itself from the fast-food stigma. Nevertheless, the restaurant chain serves food fast, or at least used to.

Earlier this year, Chipotle restaurants in Minnesota were compelled to let go of five hundred employees in the face of an audit of their employment documents. Presumably, those employees were illegal immigrants. Anecdotally, I can tell you that stopping at a Chipotle prior to this cleansing of their labor force was a spectacle of efficiency carried out by a majority Latino staff.

Since the raid on Chipotle restaurants in Minnesota, their labor force has become far more diverse with an influx of white suburban teenagers. Coincidently, the quality of service has declined.

The last time I was in a Chipotle, there were half a dozen employees behind the counter running around like chickens with their heads cut off, overwhelmed and under-motivated, serving a line of customers stretching out the door. Long lines are not unusual at Chipotle. However, they used to move a lot quicker than they do now. Despite often speaking the language better than their illegal predecessors, these new American workers seem to understand it less. Orders had to be repeated. Mistakes were common. The workflow was sporadic. And management was non-existent. After being raided for illegals, Chipotle went from a “quick-causal eatery” to just another hit-or-miss fast-food joint.

Question: whom does this benefit? How is anyone in this scenario better off? The illegals lost their jobs. Chipotle lost a productive and efficient workforce and was forced to put plans for expansion on hold. Worst of all, consumers lost a certain quality of service. All this — the jobs, the productivity, and the value — were results of voluntary trade. No one was holding a gun to anyone’s head. No one was violating anyone’s rights.

However, people were violating the law. That seems to be the only point carrying any weight with most conservatives, including those in the Tea Party. Leading up to the Iowa caucuses, the Tea Party Immigration Coalition has encouraged recipients of its newsletter to bombard talk radio with a message of crackdown on illegal immigrants and those who would employ them. Talking points include securing the border with a fence and the military, securing the workplace with E-verify, and securing the interior by apprehending and deporting illegals, among other measures. 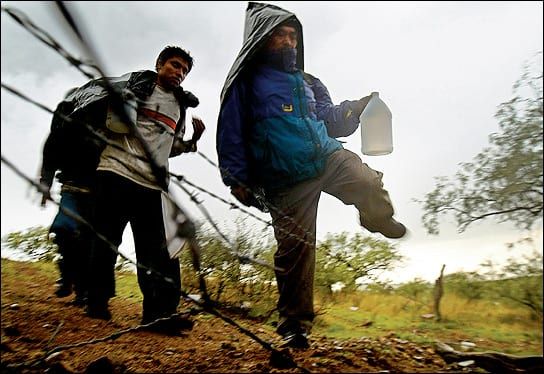 Removing incentives is a better deterant to illegal immigration than this or any fence.

The frustration which drives conservative angst regarding illegal immigration is understandable. At root lies our reverence for the rule of law. People who break the law ought to face consequences. Yet immigrant illegality is tolerated while citizens are held to a different standard. There is also a serious national security concern when millions of foreign nationals are pouring over the border without any scrutiny of their health, conduct, or character.

However, these and other concerns surrounding immigration conflate in strange and unusual ways which contradict free market principles. For instance, how is life under E-verify an expression of the free market? Would not a mandate of E-verify place the federal government in direct oversight of every employment relationship in the country? Where’s that in the Constitution? Aren’t conservatives typically arguing against such intervention in the marketplace? How could we insure against abuse? Imagine your E-verify status being “turned off.” How could you fight that? How would you feed your family in the meantime?

Zeal to crack down on illegals too frequently crowds out such questions. The assumption is that decent hard-working Americans have nothing to fear from an E-verify system or other measures to handle illegals. That’s a dangerous assumption, particularly when you cannot say with certainty who may come to power tomorrow.

Of greater concern than unintended consequences are our first principles, the foundation upon which we ought to base our policy prescriptions. As conservatives, we tend to recognize that laws are not made just through their passage. We would not argue that a law restricting speech, if passed, ought to be enforced. Our first concern is that policy flow from natural law and secure individual rights.

Looking at illegal immigration in this light, we find that it is an invented problem. We have created it through public policy which does not compliment natural law. Perhaps the best example is the welfare state. Taking money from those who earn it to give to those who do not is a bold-faced violation of individual rights. It is also a magnet for those on the receiving end. A smorgasbord of publicly-funded goodies, from direct monetary benefits to services like health care and education, attract a different quality of immigrant than we would otherwise see. Stories of our immigrant forebears pouring off boats with nothing but the clothes on their backs are the stuff of American legend. They came for the freedom and opportunity to make something of themselves, not a handout. Ending the welfare state, or at least reforming it significantly, would change the incentives for immigration. 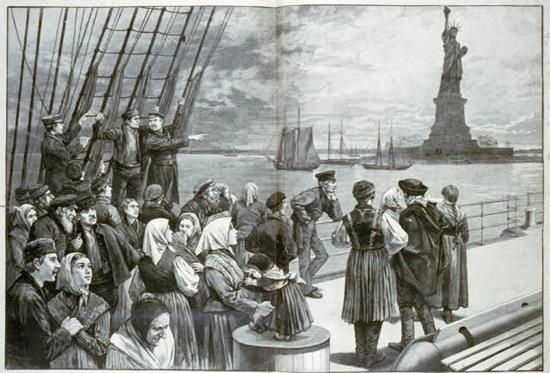 These guys came over with no guarantees, a different breed from that attracted today.

Similarly, we have exasperated the illegal immigration problem with perverse regulations on employers which create a black market for labor. A major pillar of that black market is the minimum wage. Sold as protection of the little guy, the minimum wage actually bans his employment. Consider, there would be no purpose in dictating a minimum wage unless someone was willing to work for less. Telling them they can’t work for less is telling them they can’t work. How does that help them? Indeed, all it does is cut off legal opportunities, many of which are replaced by illegal ones. An illegal immigrant, having already crossed the line both literally and figuratively, is a natural fit for the black market our labor laws have created.

Then there’s our criminal justice system and border security. As PJM‘s Victor Davis Hanson outlines in a recent piece for National Review, law-abiding tax-paying property owners are at the mercy of illegal immigrant thugs who the authorities do nothing about. However, the issue is not the thug’s national origin or legal status so much as weak and permissive law enforcement. A thug is a thug. Not only should authorities be aggressively protecting the rights of law-abiding citizens, but laws governing the use of force ought to allow citizens to defend themselves and their property. There used to be signs in this country which read “trespassers will be shot,” and they weren’t posted for novelty. In any case, the workload of law enforcement and border security would be lightened significantly if we simply corrected the incentives to immigrate by cutting off welfare and restoring a free market for labor.

The problem which our Chipotle example highlights is that a free market for labor will not always favor native workers. The immigration debate confronts us with an uncomfortable truth regarding our own sense of entitlement. Often lost among the lofty rhetoric of a free market is the reality that you may not be the best person for your job. Indeed, an immigrant may be able to do it better and cheaper. If they can, your employer is within their rights to dump you and hire them. That can be a tough pill to swallow, particularily in a time of high unemployment. Americas certainly need jobs. However, need is not a moral claim. The moment we accept it as such is the moment we concede the Left’s fundamental premise and invite every economic intervention under the sun.

We need a thoughtful debate on immigration that transcends the false dichotomy which presently dominates. Our choice is not between an authoritarian crackdown on the one hand and blanket amnesty on the other. Instead, we ought to start with our first principles and work up from there. The goal is not to be “humane” or to avoid being “heartless,” as some of our Republican candidates for president have advised. Our goal is to be just, to secure the individual rights of our citizens by protecting them from external threat and ensuring their economic liberty.

What does that look like in practice? We end the welfare state. We reform labor laws to respect voluntary employment relationships. And yes, we secure the border and step up enforcement of the law. However, we have to take a serious look at what the law currently is and ask what it should be, on what principles it should be based, and how reasonably it can be enforced. We are not going to deport 11 million people. Nor should we ignore law-breaking. There is a spectrum of response which does not compromise principle. Our punishments ought to be measured and practical. While thugs ought to be dealt with harshly, people seeking to engage in honest trade should be able to do so.

There’s plenty of room for debate within that context. However, it is only possible if we stop demagoguing the issue and start thinking it through rationally. Better burritos are the least of the economic benefits awaiting sensible reform.