Governor Gavin Newsom held his weekday presser on Monday to bring all listeners up to speed on how we’re beating the Wuhan virus. It was more notable for what Newsom wasn’t asked than what he was.

California was beset by pockets of protest throughout the state on Friday and over the weekend.

Thousands of people from San Diego through Orange County and all the way up to Sacramento protested Newsom’s draconian lockdown on Californians due to the coronavirus.

Hoping to hear from state leaders about this- streets around the Capitol are closed. Law Enforcement tells me this is a balance between the right to protest and public health and safety @CBSSacramento pic.twitter.com/dYQVwajyrt

California is huge. It has all five diverse climates, from the raging hot Mojave Desert to the cool Mediterranean climes of Orange County to the snowy peaks of the Sierra. Coronavirus is hitting different sized cities differently than others in other parts of the state.  But on Monday’s coronavirus presser, Newsom indicated all of California will have to “meet the health needs of the entire state … the health needs of the entire state will prevail over whether a community has no cases” and therefore wants to re-open.

Allow me to translate: The governor just said that no cases of coronavirus in a city is no reason to re-open that city.

Newsom explained on Monday that he would not lift the coronavirus lockdown, which the benevolent dictator refers to as his “stay at home” rules.

In short, we’re all hostages now. Because we can travel to other parts to the state Newsom Californians still stand the chance of getting the virus so he must have assurances that – what? – no one will ever get it again?

California has “flattened the curve” that was required in order to re-open the state. A look at the number of deaths shows that not only has the state done that, but the death rate has fallen down the other side of the curve. 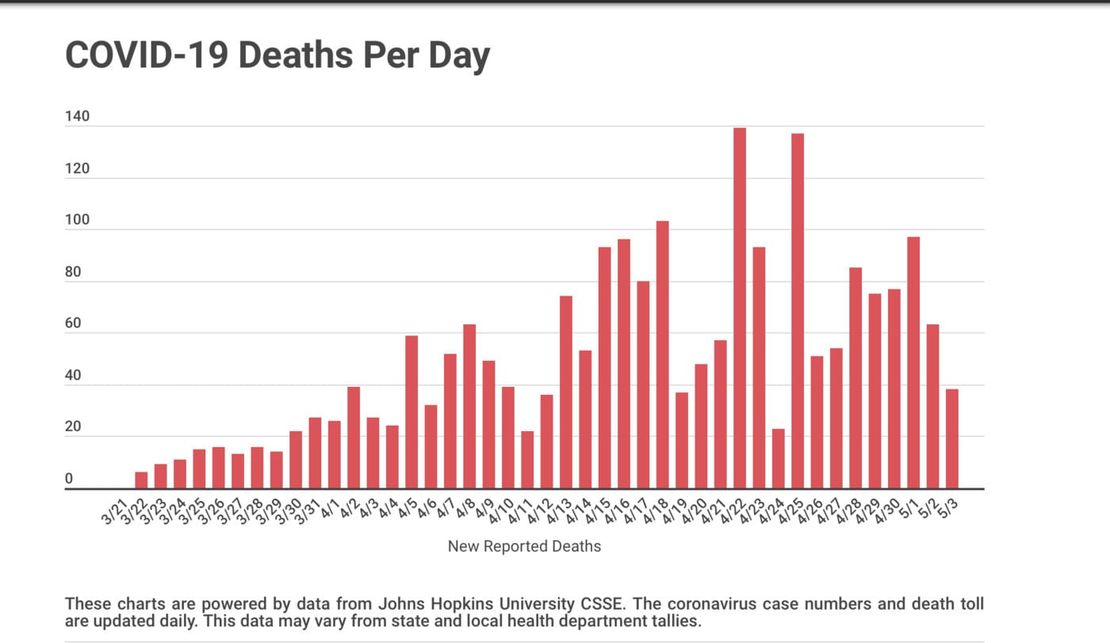 Total cases, of course, will continue to climb because 25,000 tests per day are being done and people who have had the disease and didn’t even know it will be counted as new cases.

So far, Newsom has played politics with opening; pretending he’s using only science and data to inform his decisions about re-opening. But the gravelly-voiced Newsom, with his ability to use lots of stock phrases and pet words in succession in an attempt to sound smart, got suckered with fake news which led him to throw a wing-ding, as my mom would call them, and close Orange County beaches.

The number of deaths has begun going down in the state, but Newsom has only doubled down, announcing Monday he was training as many as 20,000 people – “an army and a workforce”  – to begin tracking down COVID-19 cases.

Newsom announced that the “army” – his word – will start with a deployment of 3,000 and grow to the 20,000 mark to chase down who, what, where, and with whom COVID positive people have had connections. To what end? Newsom said, “the tracing component requires workforce and to identify individuals who tested positive…to ID their contacts (with privacy) and maybe quarantine individuals to stop the spread of the disease.”

But Newsom was upbeat! Hey, “music stores” will be able to open at the end of the week, isn’t that great? I’m sure Spotify is shaking in its collective online boots over the knowledge that brick and mortar music stores will be re-opening this weekend, with proper social distancing, of course.

Newsom said some retail outlets will be “allowed with modifications” to open this weekend to let you pick up stuff curbside, such as clothes. You read that right.

Speaking of which, I wonder how many fines Crazy Bernie’s Furniture Store in Fresno has racked up by doing exactly that same thing with his no-touch socially-distanced, no-contact furniture sales? Hold on, let me get the old calculator. Survey says: $6,000. Bernie told ABC 30 in Fresno he will not comply with Fresno’s and by extension, Newsom’s rules.

“They tell me the next one is $10k. Both times I told them I defy this. This is unconstitutional, you cannot tell me to shut down the world wide web. I could be selling to people in Yugoslavia,” said owner Bernie Siomiak while holding his Pomeranian Buster.

It seems that Bernie and Buster have more sense than Gavin Newsom.

If a guy like Donald Trump can show how to devolve governmental operations to the elected officials closest to the people, which he did under the brilliant Founding Fathers’ Federalist approach, surely Newsom could catch a clue.

No. Newsom has been busy arrogating to himself even more power.

He has issued a list of acceptable outdoor activities (yes, you may walk your dog), which he says he may update. Gee, thanks. That’s like giving a trick or treater unshelled walnuts for Halloween or an Occupy Sacramento ne’er-do-well a job.

Newsom is, in short, holding the state of California hostage until some nebulous point in the future he feels like opening back up. It’s a prescription for riots.