Roger Kimball: A Voice in the Cultural Wilderness 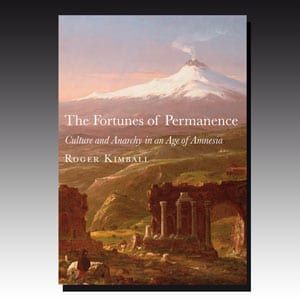 In some 21 essays, Roger Kimball — author of seminal books like Tenured Radicals and The Long March, editor of the The New Criterion, and publisher of Encounter Books — lays out a general indictment of what we might loosely call “modernism” in the West. By that term, Kimball means the rejection of over two millennia of classical values that accelerated following the horrors of World War I, and which came to full fruition in Europe and the United States after the catastrophe of World War II, before crystallizing in the 1960s amid the social upheavals sparked by the Vietnam War.

To understand what had been lost in the 20th century West, a critic would have to be a literary scholar. He should be intimately familiar with art and attuned to popular culture. He would also have to be knowledgeable about classical music and the reactions to it, conversant with European tastes, and acquainted with subjects as diverse as economics, political science, and architecture. Few observers other than Kimball are, so his multifaceted and deeply learned lamentation deserves a wide readership — not just for his accurate diagnoses, but also for the singularly learned manner in which he offers antidotes and prognoses.

For Kimball, the culprits for our decline are obvious and fall roughly into a few categories: cultural relativism, or the all-encompassing idea that there are no longer any permanent or absolute criteria by which we might assess anything as either excellent or poor; multiculturalism, the doctrine that non-Western cultures cannot be judged by Western values and therefore are exempt from the sort of censure that is routinely employed by Western critics in reference to their own societies; utopianism, the notion that man is perfectible with proper training, plenty of money, and a coercive enough government run by enlightened elites; and liberal elitism that results when large numbers of well-off Westerners are able to divorce themselves from, and thus are ignorant about, the grubby mechanisms that account for their wealth, and so can indulge in ideas whose pernicious cargoes have no direct consequences to themselves.

In all these pathologies, Kimball sees the common denominator of enforced radical egalitarianism, or the human impulse to make us all the same, which for many trumps the desire for liberty and individualism. To paraphrase Aristotle and Tocqueville, Kimball is appalled at a certain human weakness that expresses itself in a willingness to become enslaved as the price of ensuring equality — as if by nature we value egalitarianism far more than liberty.

Given that the first four years of the administration of Barack Obama can be fairly summarized as a quest for an enforced equality of result, Kimball’s essays take on an urgency not usually associated with cultural and literary criticism. In Kimball’s essays, one can see how the pernicious work of a writer, social critic, artist, or philosopher provides the intellectual means to a political end and ultimately distills into state policies: like implementing the Dream Act by executive fiat; dissimulating about the actual circumstances of the murders in Libya; or misrepresenting the nature and cost of federalized health care to force its passage through Congress on a narrow partisan vote.

Kimball’s latest book, The Fortunes of Permanence, is named after its first essay, which reviews what has been lost by reminding us of how thinkers as diverse as Hannah Arendt, Matthew Arnold, G.K. Chesterton, Jean-François Revel, and Alexis de Tocqueville variously understood the fragility of culture — the tenuous and centuries-long effort to elevate us above our savage natures. By the same token, Kimball laments how a Norman O. Brown, Aldous Huxley, or Herbert Marcuse, beneficiaries of such traditions, had the luxury to amuse, titillate, and shock us by contemplating culture’s demise:

The survival of culture is never a sure thing. No more is its defeat. Our acknowledgment of those twin facts, to the extent that we manage it, is one important sign of our strength.

As an undergraduate classics major, I once had Norman O. Brown as a professor in two small advanced Greek (Greek Lyric Poetry) and Latin (Lucretius, De Rerum Natura) classes at UC Santa Cruz between 1972 and 1973. The more Brown wove his daily, off-topic narratives of unconstrained sex and Marxist-Freudian liberation — learned and sonorously delivered — the more I noted the disconnect between Brown, the utterly conventional man (owner of multiple new expensive Volvos, resident of an expensive and expansive home on an exclusive golf course, and childishly defensive about his own lapses in Greek syntax and grammar), and Brown, the reckless advocate of New Age sexual morality for others who were less learned, secure, and wealthy. In Brown’s defense, as a good Marxist-Freudian he seemed to explain his own contradictions as a sort of false consciousness or psychological projection.

In “Institutionalizing Our Demise,” Kimball dissects the contradictions of affirmative action and multiculturalism. There are of course many, but Kimball’s incisive indictment might be best summed up with the irony that those critics who have succeeded through the Western liberal tradition, and the magnanimity of Anglo-Protestant ethical values, are often the most likely to turn around and tear them down — often in worry that they are losing street cred as the supposedly permanently oppressed. America, which alone seeks to establish a meritocracy and a multiracial society united by shared values, is so often damned because its embrace of the good is not quite perfect.

I often see Kimball’s paradox first-hand in California’s Central Valley, the ground zero of illegal immigration over the last three decades. From the first-generation Mexican national refugee, who after reaching the sanctuary of the United States feels magically delivered from the poverty, racism, and class oppression of Oaxaca, to an angry, far more affluent and secure second-generation — nursed on Chicano Studies, La Raza pop history, and a deep resentment of the supposed unfairness of the United States — is only about twenty years.

The fault is not entirely the immigrant’s, but the elite hosts who established an educational system more designed to alleviating their own sense of guilt than to facilitating integration and assimilation into American life — the time-honored ways for immigrants to achieve economic and social security. Kimball, in brilliant fashion, notes those hypocrisies.

After all, the ability for hyphenated and affluent minority careerists to find an edge from their loud “otherness” in some ways is predicated on the inability of forgotten others of the underclass to achieve basic education and employment parity. In other words, without the entry of millions of fresh impoverished and non-English-speaking illegal aliens, the pool of self-identified third-generation Mexican-Americans would, in the fashion of 20th century Italian-Americans, shrink, as ethnicity became incidental through intermarriage and integration rather than essential to their careerist personas.

In “Pericles & the Foreseeable Future,” Kimball turns to the little-appreciated connection between liberal values at home and confident muscularity abroad. He reminds us that in his Funeral Oration, delivered after the first year of the Peloponnesian War in 430 B.C., Pericles was making the argument that his world of a majestic Parthenon and Sophoclean tragedy was predicated not just on a fleet of 300 triremes, but on the spiritual confidence that such national military strength gave Athenians the luxury to enjoy their singular culture — a fact that we did not fully appreciate following 9/11. For a great democracy, the alternative to Pericles’ unapologetic confidence in Athenian exceptionalism is the “cultural suicide” of apologizing for, contextualizing, excusing, and ignoring serial attacks on the United States that bit by bit lead to neurotic worries about decline at home and ultimately impotence abroad. Note here that awareness of the dangers of hubristic imperial overreach in no way excuses pacifism and the deliberate decision not to protect one’s values and civilization abroad.

Some of the essays are lighter. Among the best is a review of Conn and Hal Iggulden’s The Dangerous Book for Boys, the recent English bestseller that sought to remind readers that once upon a time boys did and knew certain things to prepare themselves for marrying, raising a family, earning a living, and becoming the once-proverbial good citizen. Rough sports, reading about war heroes, memorizing moral aphorisms — all these may now seem trite. But what replaced them in inculcating manhood? Video games in the parental basement, no-score T-Ball, banning dodge ball, race/class/and gender chanting in grammar school? Kimball is a master of understated irony, and once more the theme of “being careful what you wish for” resonates: if today’s empowered women are frustrated that they cannot find any good men any more, one might reexamine the wages of what hyper-feminist doctrine has wrought in our schools and popular culture.

In a brief homage to G.K. Chesterton, Kimball does not whitewash the former’s anti-Semitism and knee-jerk distrust of material progress, but shows how his own classical liberalism, quest for knowledge, and empiricism reflected the nearly inexplicable success of turn-of-the-century England itself. For Kimball, Chesterton is more than a quick wit and keen observer of contemporary foibles; his unapologetic defense of what was in his time becoming caricatured as old-fashioned and out-of-date is sorely needed today — especially in the sense of explaining to American audiences why our traditions and customs arose and how their social utility benefits the nation at large.

In a review of the classicist Martha Nussbaum’s Hiding from Humanity: Disgust, Shame, and the Law, Kimball gets to the heart of Nussbaum’s thought with the blunt summation:

Nussbaum, Kimball argues, believes that the popular morality of the lower classes that hinges on a unapologetic, and dare we say “natural,” sense of shame is a sign of primitiveness, a world away from the elite sensitivity that can use its learning to contextualize and rationalize away the socially constructed “wrong” and “repulsive.”

Kimball also notes the paradoxes of Nussbaum’s life and thought in the context of her own numerous scholarly controversies, in which she was often misleading and untruthful in her work — and ultimately shameful. Nor should we forget that at least some Greeks believed that with intellectual progress can come moral regress, as shame of the unlearned gave way to sophistic rationalization of the urban elite. Many of us might prefer the shame-based moral advice of Hesiod in his Works and Days — composed at the dawn of the agrarian Greek city-state on the isolated slopes of Mt. Helicon, in out-of-the-way Boeotia — to what we read more than three centuries later of the Athenian sophists in Plato’s dialogues.

A single review cannot do justice to this rich collection of essays; but in a brief epilogue to the volume, Kimball seems to sum up of his worldview with homage to the Anglo-American tradition of individualism, skepticism, and self-reliance. And while the forces of collectivism and big-government paternalism have been on the march in the Anglosphere, Kimball sees hope, both in the reaction of the populist Tea Party movement and the popular unease with what Britain has become. I might add as well that the current implosion of the eurozone reminds us that Great Britain still possesses some vestiges of common sense and skepticism not found on the continent.

Related: Roger Kimball discusses The Fortunes of Permanence with Ed Driscoll in a 23-minute audio interview.

Victor Davis Hanson is a classicist and historian at the Hoover Institution, Stanford University, and the author of "The Second World Wars: How the First Global Conflict Was Fought and Won," from Basic Books. You can reach him by e-mailing [email protected].