Game of Thrones 2016: House of Clinton, House of Bush

In the land of the fifty kingdoms, two great houses meet in secret to determine the fate of the realm …

“But father, it’s my turn to sit upon the Oval Throne!” screamed Lord John Ellis, the young male heir to the House of Bush. Both his father, the patriarch George Herbert Walker, and his older brother, George Walker, had sat upon the throne.

But seven years had passed since the Bush family last ruled the fifty kingdoms.

“It isn’t fair. Fifteen years ago, as regional lord of the southern kingdoms, I secured the throne for George W. by throwing my support to him. I was promised the crown then and have been waiting ever since.”

The elder Bush looked weary. “Patience, son,” he replied. “For the last quarter-century, the Houses of Bush and Clinton have ruled the realm as partners. We have agreed that the Lady Hillary shall rule next, then you, then the child Chelsea.”

Lord William Jefferson, for years the nominal head of the House of Clinton, looked amused. “I feel your pain, young John Ellis,” he said, “but remember, by working together, our two Houses have become wealthy beyond our wildest dreams. Why, the isles of the south alone have filled our coffers and employed all our relations. Your brother, George W., has called me his brother, which makes me a brother to you as well.” 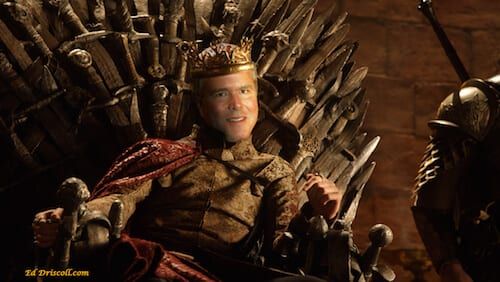 Lord William then stood and wagged his finger. He pronounced, “It is true, Lord John Ellis, that you were promised the Oval Throne in due time, but it depends on what the meaning of the word ‘is,’ is.” You see, ‘is’ can be both a verb or a term used in an idiom. You have my word that you shall rule the kingdoms after the Lady Hillary — but in the meanwhile, bring me another wench.”

With that, Lord William turned his gaze to a young waitress in the corner.

Throughout this discussion, off to the side, the once and possible future queen, the Lady Hillary, silently seethed with anger and resentment. Exasperated, she shrieked: “I have waited my entire life to become queen in my own right! I have endured years of gluttony and infidelity from Lord William. After leaving the Oval Throne, why, I was dead broke — for a few hours. And the silverware I took from the castle barely covered one trip across the Narrow Seas! I shall wait no longer — it’s my turn!”

With that, the Lady Hillary lifted a silver chalice and hurled it in the direction of her husband’s head, missing it by inches.

“Quiet, woman!” shouted Lord William. “We have no better friends or allies than the House of Bush. Why, we never would have ascended to the throne in the first place had King George Herbert Walker kept his word not to raise taxes on the peasants. King George Walker governed as we would have — under him, the state has become larger and more powerful than we could have imagined. The Clintons must work with the Bushes, not against them.”

Moving onto something else, he growled, “Where is that wench?”

“Lord William Jefferson speaks truly, my Lady,” said George Walker. “We must work together, for there are new threats to our Houses. I hear word that the peasants grow weary of the Bushes and Clintons. Many of them like the so-called king of the north, a bumpkin named Walker, who has won battle after battle against the union hordes. Other peasants like sons of immigrants in the south, passionate battle scarred warriors named Cruz and Paul. None of these young wolves are of the great Houses! Yet, these upstarts have gained supporters among the rabble by providing a vision of the future where the state has less control of the peasantry.”

The Lady Hillary stood. “You men speak of the upstarts and the peasants. What difference, at this point, does it make anyway? As long as our two Houses are in agreement, we shall crush all opposition. We will control the government and reward all our supporters in the lesser houses. All that remains is for the Bushes to agree that I am entitled to the throne next, and that John Ellis may rule after me.”

Silence followed as the men pondered her statement. After a few moments, the elderly Bush patriarch answered. “There is wisdom in her words, son. We must prevent the peasants from seizing the throne. Why, think of the Lady Melisandra Warren, who would place a hatchet in the skull of every merchant in the realm.”

John Ellis, however, heard only words of betrayal from his father. He pounded his fist on the table. “No! I am the adult in the room! I am a grown up!” he shouted, his face reddening. “I swear, by the old gods and the new gods, that no one shall deprive me of my right to the throne.”

“Brother,” interjected George Walker, “I have an idea. What if your son, my nephew George Prescott, were to sit upon the throne after Chelsea?”

Hearing this proposal, Lord William Jefferson looked up from the bosom of the young waitress.  “You are a wise and patient man, Lord George. The Clintons and Bushes have ruled for decades and shall rule for generations hence. Lady Hillary shall sit next upon the Oval Throne, followed by Lord John Ellis, then Chelsea, then George Prescott. Let us seal this accord with libations for all.”

All eyes turned to John Ellis. He was angry, but sensed that an agreement had been reached.  “These terms are acceptable,” he said slowly, “but only if we can agree to have Walker, Cruz, and Rubio executed.”

He continued, “How dare they continue to raise their voices against me! Cruz has no respect for the old ways. Rubio defies my commands. Why, Lord Romney had more sense — a word from me and, like his father before him, he dropped his claim to the throne.”

“We have an accord,” said Lord William Jefferson. “Deal!” added both Georges in unison.

“Wonderful,” said Lady Hillary. For the first time in years, she felt a sense of relief, and even allowed herself a genuine smile. Her lifelong dream was finally in her grasp.

The moment, however, proved fleeting. Lady Hillary turned her attention to the royal scribe.  “Now, let’s burn all records of this conversation.”