The Islamic Threat Is Present in the U.S. 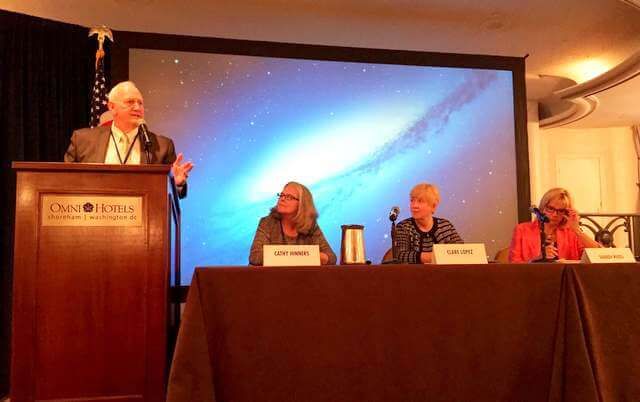 WASHINGTON – Three American women who have been branded as “anti-Muslim” by the Southern Poverty Law Center (SPLC) spoke out against the threat of Islamism in the United States at the Family Research Council’s Values Voter Summit on Saturday. Contrary to the rhetoric SPLC and others, these women are not “Islamophobes.”

“Americans need to know the threat is here. So many people, when I say ‘the Muslim Brotherhood,’ they say ‘that’s an Egypt problem.’ It’s not — it’s in every state of this country,” declared Cathy Hinners, a law enforcement instructor and founder of the website Dailyrollcall.com.

Hinners was joined by Clare M. Lopez, an intelligence expert with a focus on the Middle East, and Sandy Rios, director of government affairs for the American Family Association and Fox News contributor. All three women were attacked in the SPLC’s “Women Against Islam” pamphlet, which has been described by many conservative outlets as a “hit list.”

“This is dangerous because there is a basic principle of Islam which can turn every Muslim into a potential vigilante,” Lopez declared, citing the doctrine that Muslims must “forbid the evil and enjoin the good.” She, Rios and Hinners see the SPLC “hit list” as marking a target on their backs. When Rios declared, “By the way, we all carry,” the crowd erupted in applause.

Islamism in the United States

“Tennessee is ground zero for Muslim activism in the United States,” Hinners declared. In a separate interview with PJ Media, she explained the impact of Islamist activism in the schools.

Hinners specifically mentioned one recent “explosive discovery” in this Bible Belt state. “In one of the counties in Tennessee, we learned that children in seventh grade are saying the Shahada — that there is no God but Allah and that Mohammed is the messenger — in class,” she explained. While the teacher led the students to say this “under the guise of social studies,” Hinners argued that “there is no historical value in saying a prayer or the Islamic profession of faith.”

This is a serious issue because the Shahada is considered the most important part of converting to Islam — it is a public declaration that the speaker embraces the faith, rejects the “polytheism” of Christianity and follows Mohammed as the prophet of Allah.

Hinners also mentioned textbooks with subversive themes and instruction materials provided by the Council on American-Islamic Relations (CAIR), an organization with alleged ties to Hamas and other terrorist groups. Tennessee’s pacing guide also gives a disproportionate weight to Islamic civilization — 17 days — as opposed to the Roman Empire, which is only given four days of teaching. “We’ve been told by some teachers that they had to skip that part because they don’t have enough time for social studies, so Islam took priority over the Roman Empire.”

Islam as a Threat — A Political Religion

“Islam is not like Buddhism or Judaism or Christianity — it is a political system with religious elements,” Rios declared. In a post-conference interview with PJ Media, she clarified her position by contrasting Islam with Christianity.

“Speaking theologically, there could not be more difference between the two faiths,” Rios said. “The God of Christians gave His life to redeem, while Mohammed’s Allah is a god who demands vengeance and blood.” The Fox News contributor added that “Christianity is based on the ability to choose,” while “with Allah, it’s like ‘believe or die.’”

Defending this characterization of Islam, Hinners argued that “Islam was peaceful at first — on page one and two it is — but Mohammed turned violent.” Lt. Gen. (Ret) William G. Boykin, executive vice president at the Family Research Council (FRC), agreed. Boykin explained that the doctrines of “progressive revelation” and “divine abrogation” mean the later, more militaristic passages in the Q’ran supersede the peaceful passages at the beginning.

The military side of Islam explained why the building of a mosque at “ground zero” — the site of the September 11, 2001, attacks in New York City — proved so controversial. “In the days of Mohammed, mosques were military buildings, and it is considered a victory when one is built,” Hinners explained.

Lopez said mosques are still used as military buildings in Islamic countries today. “American troops in the Middle East were surprised to be shot at from the minarets of mosques,” Lopez explained, because the troops thought mosques were merely religious buildings like Christian churches. The gunfire and weapons often found stockpiled in the religious centers proved otherwise.

Many Muslims, in advocating for the application of Sharia law (the Islamic legal code) in the United States, are de facto opposing the American constitution, Boykin argued. Rios wholeheartedly agreed.

“Sharia law is the part of Islam that demands obedience, that is brutal to women, enjoins female circumcision, honor killings, and throwing homosexuals from high buildings,” Rios explained.

Practices like female circumcision (forcing a woman to have her clitoris mutilated or removed in order to make her less likely to sleep around) and honor killings (a family putting their daughter to death for various offenses like marrying outside Islam) are rightly condemned as misogynistic under American law. The horrific murder of homosexuals is obviously also illegal in the United States.

Dr. M. Zuhdi Jasser, founder and president of the American Islamic Forum for Democracy (AIFD), is an outspoken Muslim patriot, and has supported statewide bans on Sharia law. Jasser and his group represent Muslims who “advocate for the preservation of the founding principles of the United States Constitution, liberty and freedom, through the separation of mosque and state.”

AIFD’s website declares that the organization is dedicated to “directly confronting the ideologies of political Islam and openly countering the common belief that the Muslim faith is inextricably rooted to the concept of the Islamic state (Islamism).”

While the panelists might be expected to disagree with Jasser, claiming that Islam is inescapably political, they had nothing but outspoken praise for the man. “He is a Muslim who has proven his loyalty to this country, and he is worthy of our respect. We need more like Zuhdi Jasser,” Rios declared. “He seems to be a really good man,” Hinners added.

“M. Zuhdi Jasser is a brave man, he is a patriot,” Boykin declared. “But how many M. Zuhdi Jassers do you know?” he asked, pointedly.

As illustrated by their praise for Jasser, the panelists do not consider all Muslims to be enemies of the United States, only those who advocate for what Jasser calls “political Islam” or “Islamism.” Lopez, Rios, Hinners and Boykin are not “anti-Muslim,” as SPLC claimed, but merely anti-Islamist.

In the Middle East, Support the Kurds

This support for American-friendly Muslims also extended to the Kurds, an ethnic group in northern Iraq and the surrounding area, which is currently fighting the Islamic State (ISIS).

“I would never advocate arming Muslim groups, but I would arm the Kurds,” Boykin declared. “I don’t understand why Obama refuses to do so.”

Hinners, who constantly warns about the Islamist influence in her area of Tennessee, called on Americans to reach out to Kurds living in the United States and offer assistance. “There are 1,100 Kurds in the Nashville area. Look for Kurds over here to help the Kurds in the Middle East,” the law enforcement instructor said.

Even so, the Kurds are a minority in the Middle East, and the panelists argued that the region is at war because of conflicting Islamist political ideologies.

“I see the conflict in the former Iraq and former Syria as an intra-Islamic conflict between Sunnis and Shi’ites,” Lopez added. Sunnis and Shi’ites, as the two largest denominations of Islam, have control in various parts of the Middle East. They are divided by the issue of the rightful caliph — the successor to the prophet Mohammed and head of the Islamic state — after Mohammed died.

While a vast majority of Muslims are Sunni, Iran is a Shi’ite state and has emerged in a very dominant position in the Middle East. While the majority of Iraqis are Shi’ite, Saddam Hussein was a Sunni and oppressed his own people. “When the U.S. attacked Iraq, we broke the balance between Sunni and Shi’ite,” allowing the Shi’ites to take the upper hand, Lopez explained.

These politico-religious divisions behind the warfare backed up the panelists’ claims that Islam is largely a political religion. But their support for Jasser and the Kurds also showed their belief that Islam does not necessarily have to be tied to a state ideology.

Contrary to the claims of SPLC and others, these panelists are not “Islamophobes” or “haters,” but Americans weary of a politico-religious ideology opposing their way of life. It’s high time others listened to their concerns and realize the dangers of Islamism.