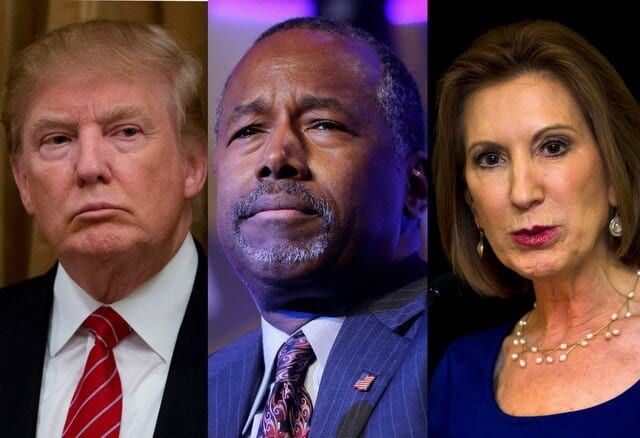 2015 has become the “Year of the Outsider” in the GOP presidential race. First came the audacious and outspoken media mogul Donald Trump. Ben Carson, the subdued neurosurgeon who embodies the American Dream, followed suit. Now, former CEO and Senate candidate Carly Fiorina has galvanized the polls.

These candidates, without a lick of experience in elected office, have taken positions one, two and three in the polls — their support adds up to 52.1 percent in the Real Clear Politics polling data average.

At a time when the Republican-dominated House and Senate seem unable to stop an overreaching liberal president, conservatives have a right to be angry, and many of them are demanding change come from outside Washington, D.C. But these candidates don’t just lack political experience — they lack true conservative credentials.

The real estate magnate and media mogul has rightly drawn attention to the issue of illegal immigration, but when it comes to fiscal policy and the rule of law, he is no conservative. Donald Trump has built his fortune — the part he didn’t inherit from his father — by making deals with the government to kick out his competition.

“Trump became ‘partners’ with the City of New York to build a hotel in the 1970s — a deal that involved a 40-year property-tax abatement that saved him ‘tens of millions of dollars,’” explained National Review’s Robert VerBruggen. This “tax abatement” proves no different than a government subsidy, not unlike the millions of dollars the Obama administration gave to the failing solar company Solyndra.

In the 1990s, Trump petitioned the government of Connecticut to condemn five Bridgeport businesses so that he could use the land to build “a $350 million combined amusement park, shipping terminal and seaport village and office complex,” reported Mediaite’s Andrew Kirell. Would Trump no longer be considered a “winner” if it was well-known that Connecticut refused him on this?

Trump also lost out on using eminent domain to buy an Atlantic City woman out of her home to build a parking lot and waiting area for his hotel’s limousines. As Kirell noted, “the widow refused to sell her property, so Trump spent years under the guise of ‘eminent domain’ trying to get the government to pry the woman’s land for his private use.”

As Richard Anderson explained on Ricochet, the key element of Trump’s crony capitalism is regulation. “The more regulated a sector, the easier it becomes to run to Washington, or the state capitals, with requests for special waivers, preferences, and deferrals,” Anderson explained. As the government gets bigger and regulations become more complex, businesses are required to navigate the system, bribing their way to success in the market.

Needless to say, conservatives do not believe in allowing government — and by extension those who bribe government officials — this much control. They support private property rights and favor a more restrained use of political power. Even if Trump had not supported single payer healthcare in the past, or identified as a Democrat, or given to Hillary Clinton’s campaign and foundation, etc., he still should be an unacceptable choice to free market conservatives.

In the latest presidential debate, Trump was asked about his comment that when he gives money to elected officials,“they do whatever the hell you want them to do.” His response? “You’d better believe it.” Rampant corruption? Sign me up.

Dr. Ben Carson, a neurosurgeon raised in the Detroit ghetto, has a truly inspiring story of achieving the American Dream. He speaks slowly, clearly and respectfully, with all the deference that Trump lacks. These are, alas, his only political virtues.

Carson speaks about his faith, the virtue of his mother and the errors of President Obama. Unfortunately, his talking points are very sparse on policy. The neurosurgeon seems to be running not so much on a political platform, but on his own personal appeal.

The Blaze’s Matt Walsh critiqued the hint of policy proposals Dr. Carson has put forth and found them wanting.

“I like that he’s pro-life, but he’s also been very confusing on the subject,” Walsh explained. Carson has often suggested that some women “avail themselves” of the abortion pill. “He’s also admitted that in his medical practice he did research on an aborted child and referred women to doctors who perform abortions.”

While Carson supports a flat tax, “he really won’t talk about entitlement spending at all.” Carson’s tax reform would bring in less money than the system needs. Walsh, like most conservatives, supports reform to shrink the size of government, but Carson has said nothing on the subject.

Foreign policy may be Carson’s most obvious weakness. When asked about the root cause of strife in the Middle East, he traced it back to “Jacob and Esau,” not Isaac and Ishmael — the two figures who generally represent Jews and Arabs — and not the establishment of the Jewish state. Carson also did not know that the Baltic states — Latvia, Lithuania, and Estonia — are already part of NATO.

Walsh’s most serious critique of Carson, however, centered on his faith. Walsh recalled a quote Carson posted on Facebook around Easter: “Jesus was a man of values and principles, and he ended up being crucified for it. But, he rose again to advocate godly principles.”

“Jesus wasn’t a man who was crucified ‘for his principles’ and then came back to ‘advocate principles,’” Walsh explained. “He was and is the Son of the Living God who died on the cross and rose from the dead to bring salvation to mankind.”

For a candidate like Ben Carson, whose primary base of support is evangelical Christians, to screw up such an essential part of Christian doctrine is indeed astounding. But, as the New York Times’ Ross Douthat explains, evangelical voters have a weakness for the “low on specifics, high on godliness” pitch.

“The evangelical tendency has been to look for a kind of godly hero, a Christian leader who could win the White House and undo every culture-war defeat,” Douthat argues. Unfortunately, political and cultural changes do not usually come from one powerful individual, but “from networks, institutions, interest groups,” and require “strategy, alliance-building and steady pressure.”

Evangelicals should wake up and move on from Ben Carson. He cannot articulate the Christian faith, and there isn’t any evidence he would be an effective proponent of conservative policies.

Fiorina outspent DeVore 3 to 1 in the primary, and then went on to lose badly to Senator Barbara Boxer in the general election. What caused this Republican to lose badly in a wave year for the GOP? Her business record at Hewlett-Packard (HP).

In September 2010, Carly Fiorina was running surprisingly close to Barbara Boxer, but then Boxer released an ad about Fiorina’s time at HP. Fiorina’s poll numbers plummeted and never fully recovered. As the Washington Post’s Chris Cillizza said, “the ad functioned as a sort of knock-out punch for Boxer even in a year where Republicans claimed victories all across the country.”

“As the CEO of HP, Carly Fiorina laid off 30,000 workers,” the ad declares. Then it pans to footage of Fiorina, who says, “when you’re talking about massive layoffs, which we did…perhaps the work needs to be done somewhere else.” Then the ad explains where the jobs went: China.

Even worse, PolitiFact rated the claim “mostly true,” since Fiorina did lay off 30,000 workers.

The way Fiorina herself tells the story, she turned HP around and was fired because she challenged the status quo. In reality, she pushed a controversial merger with Compaq, got her way and hurt the company. When Fiorina took over, HP’s stock price was $55 a share; it dropped to a little less than $20 a share under her leadership.

There are good reasons why Fiorina shows up on lists of the worst CEOs in recent history. Notable lists come from Moneywatch, USA Today’s American Ouster and ABC News. CNBC ranked her the 19th worst CEO of all time.

In the words of Townhall’s John Hawkins, “if you think it wouldn’t be incredibly effective to point out that Fiorina fired 30,000 workers, tanked the price of the company’s stock, damaged Hewlett-Packard so badly that it has yet to recover and STILL walked away with 100 million dollars for being one of the worst CEOs of all time, you’re kidding yourself.”

Finally, Fiorina’s stances on certain positions reveal she is no conservative. As RedState reported in the 2010 race, she voiced qualified support for Obama’s stimulus, backed the Wall Street bailouts, did not reverse her previous support for an internet sales tax and did not retract her master’s thesis, which advocated greater federal control of local education. She also backed the California DREAM Act, which grants in-state tuition to illegal immigrants, and cap & trade.

“If you’re backing Carly Fiorina, you’re backing a 0-1, establishment moderate who was an epic failure at the one thing that is supposed to qualify her for the presidency,” Hawkins declared. She may have impressive foreign policy answers and a presidential demeanor, but she is no true conservative.

If you want to support a conservative change agent for 2016, you still have good options. Three senators, Ted Cruz (R, Texas), Rand Paul (R, Kentucky) and Marco Rubio (R, Florida), have solid conservative records and strong plans to restrain the size and scope of the federal government. Some governors, like Bobby Jindal (R, Louisiana), have reformed their tax codes and achieved real change. Please note that none of this should be taken as an endorsement.

Besides, is it logical to choose a candidate with zero experience in elected office, and make that person president of the United States?

As Real Clear Politics’ Carl M. Cannon wrote, “Would any of the three political novices allow, say, Chris Christie or Jeb Bush, perform brain surgery on them? The answer is: of course not. So why is politics the only profession in which it’s logical to start at the very top?”

“Would Ben Carson advise an aspiring physician to skip medical school because he doesn’t like the way the nation’s health care system is run?”

By all means, support a candidate who will challenge the status quo and bring conservative change to Washington — just make sure that person is a true conservative. Trump, Carson, and Fiorina aren’t.