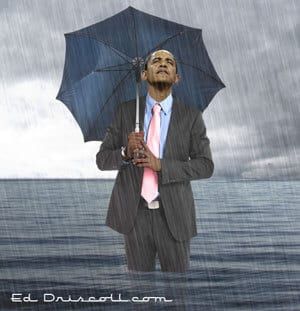 In just six weeks, economists, analysts and the business press have become obsessed with “residual seasonality.”

You see, they’re getting tired of telling us how awful the economy’s performance has been during so many of the year-opening quarters during President Barack Obama’s administration. Last Friday’s announcement that first-quarter gross domestic product contracted by an annualized 0.7 percent marked the third time since the recession officially ended in mid-2009 that the economy has begun the year with a downturn. Since the remaining quarters have shown better results, they’re all too eager to latch onto any hint that there might be something wrong with the government’s reporting. Enter “residual seasonality.”

All of this appears to have started when CNBC’s Steve Liesman published “Why is the economy always so weak in the first quarter? Nobody Really Knows” on April 22.

I didn’t take Liesman’s column seriously. It’s hard to feel guilty about that. He’s not a serious commentator.

The Keynesian koolaid-drinking Liesman, whose last name appears to be more than an accident of birth, has two primary missions at CNBC: first, to claim that all is well no matter how weak the economy is; and second, to rudely interrupt, shout down and otherwise bully the eminently sensible Rick Santelli when he dares to insert actual facts and historical perspectives into discussions.

Liesman accurately but disingenuously informed readers that first-quarter GDP growth during the past 30 years has averaged 1.87 percent, while the full-year average during that time has been 2.7 percent. After he found “several economists” who characterized that difference as “statisticially significant,” he went into “we’ve got to fix this” mode (the quote is from the story’s accompanying two-minute video, as the text dispatch has since been updated):

… such large differences, they shouldn’t appear if the data was correctly adjusted for seasonality … given the failure of the data to correct itself over time, the government should be involved in trying to correct it. But the Bureau of Economic Analysis, they do the GDP work for the government, they declined to comment.

The BEA, suspiciously moving at warp speed instead of the speed of government, almost instantly broke its silence after the CNBC report appeared. In Liesman’s revised writeup, we see that its spokesman even said that they were already working on the alleged problem:

Brent Moulton, associate director for national economic accounts, said even though the data is adjusted for seasonal patterns, it can still show so-called “residual seasonality.”

“BEA is currently examining possible residual seasonality in several series, which may lead to improvements in …. the regular annual revision to GDP scheduled for July,” he added.

How convenient. Excuse me for believing that someone inside the government who wishes to massage the historical GDP results, scheduled for retroactive revision on July 30, might have planted the “residual seasonality” idea with Liesman to give the issue, which BEA has clumsily admitted it was already “examining,” a veneer of outside respectability before publicly recognizing it.

Where is this “residual seasonality,” defined as “the manifestation of seasonal patterns in data that have already been seasonally adjusted,” hiding?

An economics letter published by the Federal Reserve in San Francisco in mid-May contended that there’s evidence of it in “all of the major components of GDP—consumption, business investment, net exports, government spending, and inventory investment.” At the time, the authors believed that the first quarter’s originally reported annualized 0.2 percent growth should have come in 1.6 percentage points higher.

Shortly after the San Fran Fed’s letter, the BEA, without quantifying, published two blog posts indicating that its scope might be far narrower. On May 20, it said that it was investigating potential residual seasonality in government defense services spending and certain items in the Census Bureau’s quarterly services survey. On May 22, it added “certain inventory investment series that currently aren’t seasonally adjusted.”

Demonstrating that the problem’s existence is not a given, a May 14 research paper from the Fed in Washington declared that it could not find “convincing evidence of material residual seasonality in GDP in recent years.”

Residual seasonality’s unconfirmed existence hasn’t stopped it from becoming the excuse du jour in the business press. The Associated Press, Bloomberg and Reuters all included it in their roster of potential rationalizations for last Friday’s reported contraction. Bloomberg went so far as to claim that it “probably distorted the data.” On his June 3 conference call discussing ADP’s private-sector payroll report, Moody’s economist Mark Zandi said that he believes that “there’s something to that.”

Spin doctors posing as financial experts are piling on. Joe LaVorgna, described by the contrarians at Zero Hedge as “Wall Street’s best paid, yet worst weatherman,” claimed that a properly presented first quarter would show annualized growth of 1.2 percent.

Given all the hype and hoopla, it’s amazing how easy it was to deconstruct this nonsense. The red ranges represent the years during which Republicans held the presidency and during which their economic and philosophies dominated government operations and economic policy discussions. The blue ranges are the years when Democrats held the White House or held philosophical sway. I assigned 2008 to the Democrats because the economy’s Keynesian calamity began with George W. Bush’s decision to enact a then-seen as significant $170 billion stimulus package early that year.

Contrary to what Steve Liesman claims, the economy isn’t “always so weak in the first quarter.” It’s only weak when we have Democratic Party presidents or when progressive and Keynesian “thought,” to use the term very loosely, dominate.

Why is that? That’s easy:

A longtime commenter at my home blog coined the term for results like these many years ago: “The Democrat Effect.” Adapted to the current analysis, it is “the rational response by entrepreneurs, businesspeople, and investors to excessive government intervention, overbearing regulation, crippling litigation, and taxation, all of which seriously curtail first-quarter economic activity to a greater extent than initially estimated.”

Those making noise about residual seasonality are trying to falsely “seasonalize” away the visible results of the left’s misguided policies, particularly those of President Obama, his White House, and his regulatory apparatus.