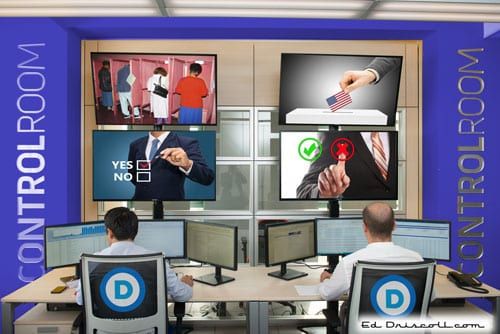 In this year’s Kentucky’s U.S. Senate race, Democratic challenger Alison Lundergan Grimes repeatedly refused to tell the public whether she voted to reelect President Barack Obama in 2012. Her unwillingness to admit to something so obvious was an incredibly impolitic move, and it certainly contributed to the size of her loss to incumbent Mitch McConnell.

However, and perhaps to the surprise of many readers, what became her go-to objection to reporters’ and debate moderators’ questions — “I respect the sanctity of the ballot box” — resonated with more than a few people with whom I’ve spoken during the past month.

There’s a reason for that. Many voters have figured out that their voting habits have become the subject of unwarranted scrutiny and electoral gamesmanship — and they don’t like it one bit. Nor should they.

Less than a week before Election Day, the New York Post reported that the state’s Democratic Committee had sent letters to “1 million registered Democrats who had failed to vote in previous midterm elections.” The missive reminded them that “whether or not you vote is public record,” and told them that the committee would be reviewing voting records “to determine whether you joined your neighbors who voted in 2014.” Recipients also received a “report card” of their voting record in the past four elections.

Although the intimidating and threatening tone of the letter generated an unusual amount of outrage, the practice of “voter shaming” itself has become fairly common.

Oddly enough, about a week before Election Day, a friend gave me an invalidly addressed postcard from the Ohio Democratic Party in Columbus which had been misdirected to his Cincinnati mailbox. It told “Christina,” the addressee (the last name was provided but has been withheld), how many times she had voted in the past five general elections “according to public records,” compared her show-up rate to “others in your neighborhood,” told her that “it’s time to do your part,” and provided her polling location. The postcard’s other side listed the Buckeye State’s almost completely hapless Democratic slate.

I vote in nearly every election, which may explain why I have never received a piece of mail or a phone call claiming to benchmark my voting behavior against others. But if I did, my reaction would be profoundly negative, to the point where I might consider not voting or withholding my vote from the candidates or causes involved. That’s apparently not how inconsistent voters react. The Post item noted above cited a 2008 study showing that “voter participation increased substantially after lazy voters received letters telling them their spotty voting history was a public record that would be scrutinized.”

It’s far too easy for voter shaming to go to the next level. In Wisconsin’s bitter 2012 gubernatorial recall election, “a group allied to the recall effort” apparently revealed information about the voting habits of residents’ neighbors. Some Democrats in heavily leftist districts even thought it would be a good idea to publicly identify neighbors who were registered Republicans. In 2014, some Wisconsin Democrats accused a group of unknown origin of targeting those who had signed the 2012 recall petition who might “also have any outstanding warrants or tax defaults” when they showed up to vote.

Voter shaming is also being employed during our now drawn-out elections. In an interview I recently had on a talk radio program in Colorado, a state which has recently gone completely to voting by mail, I learned that Republicans have credited much of this year’s electoral success to the daily monitoring of the status of targeted individuals’ ballots. Those whose ballots hadn’t yet arrived at the county boards of elections apparently received nearly daily reminder phone calls.

I have also confirmed with a local county board of elections spokesperson here in Ohio that during early voting and absentee ballot counting in the Buckeye State, records about who has voted are posted daily, giving candidates the opportunity to nag supporters who haven’t yet voted until they cast their ballots.

This is out of control. At an absolute minimum, no individual or aggregated information about early or absentee votes should be released or made available until after the polls close on Election Day. If it takes legislation to make that happen, so be it.

Candidates for public office struggling to get their message out to voters and to get their supporters to the polls aren’t going to like this, but I have a real problem with the whole idea of citizens’ voting records being available to anyone and everyone, which is apparently how it is in most if not all states.

Even having basic registration data out there seems problematic to me. I know several upstanding people who will not register to vote because they don’t want anyone besides close friends and family to know where they live. I find it more than a little ironic that many of the very people who decry low voter turnout don’t seem to care how being a registered voter can put a target on your back. It’s actually quite clear that many so-called “good government” types actually like it that way.

Though some clearly disagree, I think it’s fair to contend that Alison Grimes, as a candidate, owed Kentuckians an answer as to whether she voted for Obama two years ago. It’s not at all fair to say that the whole world has a right to know the registration status of each and every citizen, along with when they have and haven’t voted.

In a system which supposedly pays homage to the secret ballot and the sanctity of the ballot box, what private citizens have and haven’t done in elections should remain a secret.