Rolling Stone Goes to the Barricades 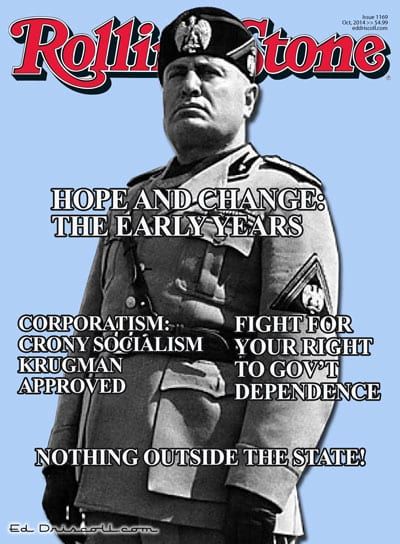 Its mission: Motivate its largely apathetic and mostly Dear Leader-worshipping readers into defending Barack Obama and his party in the midterm elections.

Good luck with that, guys. Rasmussen, in announcing its latest “Right Direction or Wrong Track” poll results, reported that “roughly two-thirds of voters of all ages agree the country is on the wrong track.” That would seem to indicate that quite a few rockers, rappers, and middle-aged stoners are among those who believe that all is far from well.

The Princeton economist and former Enron adviser may have decided that he couldn’t make his absurd case anywhere else without destroying what little remains of his credibility. If so, “In Defense of Obama” delivers a ringing confirmation of that assessment.

Krugman writes that “Obama has emerged as one of the most consequential and, yes, successful presidents in American history.” Looking at just three of his justifications will give readers an idea of how unhinged the man has become:

Here are the facts concerning that final claim:

Unfortunately, Krugman is right in contending that Obama’s presidency has been consequential. The nation will be living with his negative legacy for generations to come.

As to its success, Obama himself told the nation just days before he was first elected president that he was on the verge of “fundamentally transforming” the nation. In some respects, he has. To the extent he has, that transformation has been decidedly negative.

Rolling Stone’s other contribution to reader disinformation came in the form of “The Obama Hope and Change Index: 6 Years of Progress, By the Numbers.” It is not an index at all, but a list of 55 statistics which are supposed to “prove President Obama has accomplished more than you may realize.”

The list is a tacit admission that the pickings among Obama’s “accomplishments” are really slim. What follows are three of the worst examples.

It gleefully points out that there are now 149 detainees at Gitmo, compared to 242 five years ago. Of course, there’s not a word about how many of those who were released have returned to either the battlefield or terrorism.

Finally, it trumpets, “Immigrants brought to the U.S. illegally as children now shielded from deportation: 800,000.” Wow. Even some Rolling Stone readers might understand how utterly damning that statistic is.

If Krugman’s crud and that pitiful collection are all a dedicated leftist rag can drum up in support of The One, who early this month declared that the midterms elections really are all about his policies, maybe they really are destined to be intensely miserable on November 5. But that will only be the case if those who oppose his policies turn out in numbers greater than currently projected.