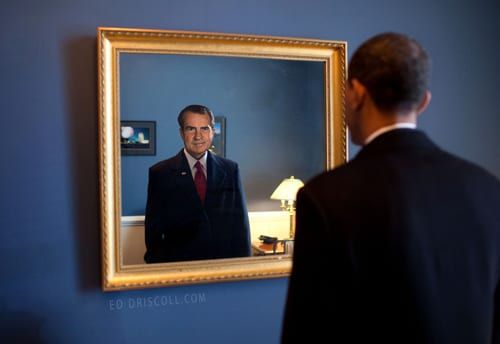 I saw and remember that speech.

As a college student in a hurry to get out, I was taking summer classes at Miami University in Oxford, Ohio (the real Miami, not that latter-day interloper in Florida). Living off-campus in a sweltering second-floor dump posing as an apartment, I headed over many evenings to the one male dorm which remained open for its cooler temps, beckoning piano, and working TV.

Most evenings, I was typically the only person in the dorm’s common area. Not that night. Perhaps twenty students were there. The heckling and hollering in which I eagerly participated was fierce.

I thought back to Nixon’s reelection in 1972. After Nixon crushed George McGovern, perhaps a dozen bitter, unhinged Miami students paraded around campus, screaming at the top of their lungs in anger at the outcome well into the wee hours of the morning. I went past them during a late-evening jog, thankful that I could probably outrun them if they set their sights on me.

Wherever they were almost two years later, they must have been beside themselves with glee. My perspective was relief that just desserts had been delivered to a man who had betrayed his nation.

Though not a particular fan of Tricky Dick — a take which my late mother later shared, when she informed me that 1972 was the only time she couldn’t bring herself to cast a presidential vote — I nonetheless understood that this clearly shady guy was far better than what we would have had to endure with McGovern.

I was also fully aware that the press had been at war with the onetime ardent anti-communist Nixon for over a quarter-century, going back to his exposure of Alger Hiss as a Soviet spy and his 1952 Checkers speech.

They thought he was gone for good after two stinging electoral defeats. The first was his “loss” in the 1960 presidential contest to John F. Kennedy; Nixon bowed out gracefully on election night rather than spend months pursuing clear electoral improprieties which arguably erroneously swung the election to JFK. The second was the California governor’s race in 1962, after which he declared, “You won’t have Dick Nixon to kick around any more.”

The press and the left thought they had marginalized conservatism and even the Republican Party forever when Barry Goldwater lost to Lyndon Baines Johnson in 1964. They were furious that Dick Nixon could get past them — recall that until the advent of cable TV and talk radio, roughly a dozen media entities had virtually ironclad control over deciding what was news in the U.S. — and rise from the ashes of political oblivion to the presidency in 1968. They were absolutely beside themselves when he trounced McGovern four years later.

As president, Nixon did not govern as a conservative. His administration did as much as any to inflict the scourge of racial quotas and affirmative action on the nation. He imposed wage and price controls, which, as Milton Friedman accurately warned, would end in “utter failure and the emergence into the open of the suppressed inflation.” He opened relations with Red China, which four decades later is now this nation’s largest foreign creditor and is still working on destroying us.

The June 1972 “third-rate burglary” known as the Watergate break-in by people associated with the Committee to Re-elect the President — or CREEP, perhaps the dumbest self-inflicted acronym ever — ultimately exposed Nixon’s overarching paranoia. He was aware of at least some of the shenanigans of his underlings before the 1972 election, and he subsequently engaged in reckless behavior in covering up that knowledge after that.

Whether what Nixon did rose to the level of deserving impeachment is another matter.

The articles drawn up by the House Judiciary Committee seemed compelling enough at the time. But the conduct described is tame compared to what was seen during Bill Clinton’s presidency, and compared to what we’re seeing now from Barack Obama.

Significantly, each of the three articles against Nixon refers to the presidential oath of office with this language:

In other words, the House’s impending impeachment in 1974 was primarily predicated on the idea that violating one’s oath of office in and of itself meets the threshold of a “high crime” or “misdemeanor,” whether or not the specific offending actions described in the articles themselves do. If that’s the basis for impeachment, Nixon earned it, and deserved to be thrown out of office if he hadn’t resigned. That said, though the articles describe some actions which are crimes, many are not, and that Nixon committed any of them was never proven at the courtroom level.

If violating the oath of office is supposed to be the primary benchmark, it is beyond dispute that William Jefferson Clinton’s impeachment by the House of Representatives in December 1998 was earned. Further, that impeachment effort was supported by crimes Clinton obviously committed. He made “perjurious, false and misleading testimony” to a grand jury; he made perjurious statements in writing and in deposition testimony in the Paula Jones case; and he encouraged witnesses to give false testimony in sworn affidavits and testimony. All of these crimes were committed in court-related proceedings or in preparation for them.

The country is now paying dearly for the Senate’s 1999 failure to carry out its duty to convict Clinton. Completely opposing the standard to which Nixon was about to be held in 1974, it proved not only that violating one’s oath of office isn’t enough to get you thrown out on your ear, but also that committing brazen crimes won’t even cause that to occur – especially if your political views align with those in the leftist establishment.

No wonder Obama, his administration, particularly his “Justice” Department, and his regulatory army believe they’re untouchable.