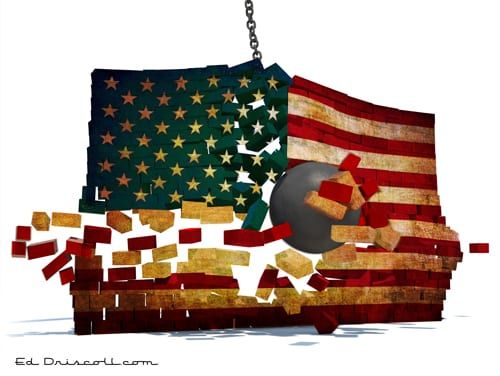 The Obama administration-driven calamity at this nation’s southern border is no naiveté-caused accident. Instead, it’s the latest manifestation of what clear-eyed observers must recognize is just one of many concerted attempts to overwhelm this nation’s institutions and its social, psychological and physical infrastructure for the apparent purpose of leaving it permanently weakened and fundamentally changed.

Conscious or not — and I would argue in most cases that it is quite conscious — what we’re seeing is a comprehensive application of the left’s long-championed Cloward-Piven strategy.

The folklore behind the strategy claims that its enunciation by Richard A. Cloward and Frances Fox Piven “only” involved collapsing the welfare system to create a political climate receptive to the idea of a “guaranteed annual income,” and — presto! — “an end to poverty.”

The idea advanced in the couple’s May 1966 column in The Nation was to have those whom they saw as naively self-reliant recognize that they were legally entitled to receive benefits and to have them apply for public assistance en masse. This would “produce bureaucratic disruption in welfare agencies and fiscal disruption in local and state governments,” thus requiring a federal solution which would, in their fevered minds, “eliminate poverty by the outright redistribution of income.”

The folklore also contends that the strategy didn’t work. That’s not really true. It really did collapse the system in one city, and it permanently changed national attitudes towards public assistance. As James Simpson observed at American Thinker in September 2008 (still-working links are in the original):

Capitalizing on the racial unrest of the 1960s, Cloward and Piven saw the welfare system as their first target.

… According to a City Journal article by Sol Stern, welfare rolls increased from 4.3 million to 10.8 million by the mid-1970s as a result, and in New York City, where the strategy had been particularly successful, “one person was on the welfare rolls … for every two working in the city’s private economy.”

… The vast expansion of welfare in New York City that came of … Cloward-Piven tactics sent the city into bankruptcy in 1975. Rudy Giuliani cited Cloward and Piven by name as being responsible for “an effort at economic sabotage.” He also credited Cloward-Piven with changing the cultural attitude toward welfare from that of a temporary expedient to a lifetime entitlement, an attitude which in-and-of-itself has caused perhaps the greatest damage of all.

Cloward and Piven targeted other applications from the very beginning. The authors telegraphed their broader intent in that infamous 1966 column (italics are theirs):

We tend to overlook the force of crisis in precipitating legislative reform, partly because we lack a theoretical framework by which to understand the impact of major disruptions.

By crisis, we mean a publicly visible disruption in some institutional sphere. Crisis can occur spontaneously (e.g., riots) or as the intended result of tactics of demonstration and protest which either generate institutional disruption or bring unrecognized disruption to public attention. Public trouble is a political liability, it calls for action by political leaders to stabilize the situation. Because crisis usually creates or exposes conflict, it threatens to produce cleavages in a political consensus which politicians will ordinarily act to avert.

Former Obama adviser and now Chicago Mayor Rahm Emanuel’s oft-cited statement that “you never let a serious crisis go to waste” is in no way an original thought.

The left has long since figured out that focusing Cloward-Piven on only one aspect of society at a time is nowhere near as effective as applying it on multiple fronts over time. The strategy’s specific applications arguably include at least the following:

Not every Cloward-Piven attempt has been successful. In retrospect, the late-1990s Internet bubble, largely caused by a deliberately asleep at the switch Securities and Exchange Commission which allowed scores of companies with no history and no chance of success to go public, may have been designed to bring about a financial crisis. The trouble with that strategy is that “the wrong guy” won the 2000 election. Even so, that debacle helped give us the economy-stifling mountain of busywork known as the Sarbanes-Oxley Act.

For all practical purposes, Cloward-Piven is now a staple of leftist electoral campaign strategy. As one commenter recently noted (I unfortunately lost track of where it originated), the Obama reelection campaign’s 2012 strategy “wasn’t just to publish propaganda, but to publish (and) distribute propaganda in such magnitudes that that folks didn’t even have to think about it, they would just foam at the mouth at the mere mention of (Mitt) Romney’s name.”

As to the recent wave of “Unaccompanied Alien Children” — that’s the Department of Homeland Security’s term, not mine — make no mistake. President Barack Obama and his advisers had to know that hordes of unaccompanied children would be sent to cross our southern border when he unilaterally imposed “Deferred Action for Childhood Arrivals” in June of 2012. Despite seeing its results, Homeland Security renewed DACA for two more years earlier this month. The default assumption simply must be that “Obama is using these children as pawns to implement his goal of universal citizenship for illegal immigrants.”

In other words, it’s Cloward-Piven, yet again.