Another Week, Another Trio of Obamacare Outrages 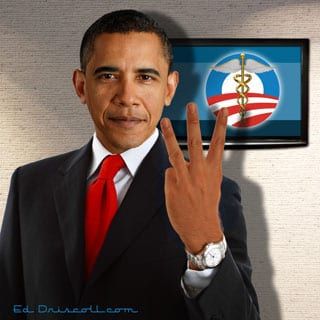 Attempting to distract Americans from the ongoing implosion of the Affordable Care Act, his alleged “signature achievement,” President Barack Obama pivoted for the umpteenth time last week, pulling “income inequality” out of his bag of tricks for yet another spin.

In a December 4 speech, he cited “growing inequality and lack of upward mobility” as “the defining challenge of our time.”

That’s interesting. During the Bush administration, income inequality stabilized, while a 2007 Treasury Department study found that income mobility from 1996 through 2005 was “unchanged … from 1987 through 1996.”

The two problems began to worsen when the POR (Pelosi-Obama-Reid) economy began in the spring of 2008. Further decay has taken place during Obama’s five-year stewardship, such as it has been, of the U.S. economy.

The president’s proposed “solutions” are the ones which have been serially tried and have always failed: a higher minimum wage, which creates higher unemployment and a larger permanent underclass; higher taxes on “the rich,” which hold back investment in future growth opportunities; and seeming limitless deficit spending, which continues to saddle future generations with growth-retarding and eventually (if not stopped) growth-killing obligations.

The best solutions are those which promote genuine private-sector growth. In these, the Obama administration is singularly disinterested. Those who doubt this assertion only need to look at the person whose help Obama has sought as his credibility and other crises deepen: John Podesta, chairman of the far-left Center for American Progress. Podesta is obsessed with income inequality, and is singularly focused on wealth redistribution through the tax code and other coercive means as the only viable solutions.

That Obama somehow needs to distract Americans from Obamacare’s virtually daily dose of bad news is obvious. What follows are just three of the latest outrages.

On the most recent edition of Fox News Sunday, Ezekiel Emanuel, aka Zeke the Bleak, one of the Affordable Act’s architects, told Chris Wallace that the president didn’t really lie when he repeatedly and unconditionally guaranteed that “you can keep your doctor, period,” because “if you want to (keep him or her), you can pay for it” out of your own pocket.

So the “solution” to the problem of the currently uninsured is to force people who like their doctors to self-insure, i.e., to become newly uninsured for what matters to them, while paying premiums for Obamacare policies under penalty of law for doctors they don’t favor, probably don’t need, and probably won’t use. We seemingly have no choice but to assume that this is exactly what the Obama administration wanted to see happen.

Scott Gottlieb, a former senior health policy adviser and a currently practicing physician, told Fox News’s Megyn Kelly on December 9 that many participants will consider it substandard because the co-pays average “about 40 percent … on branded drugs compared to about 25 percent in the private sector.” That’s intensely ironic, given the grief Obamacare apologists have thrown at supposedly inferior private individual plans. (Forgive the frequent Fox citations; as the rest of the nations’s establishment press cheers on Obamacare while consistently ignoring its serious shortcomings, Fox, with rare exceptions, mostly at CBS, is about the only broadcast news outlet exposing them.)

But there’s more — much more:

… the bigger issue is that the formula, the list(s) of drugs or the plans cover in many cases aren’t very long. And if the drugs aren’t covered, then you’re on your own. You basically have to pay for it entirely out of pocket. And the money that you spend on those drugs doesn’t count against your out-of-pocket limits and it won’t count against your deductible. This could cost patients with special conditions, patients who need special drugs, a lot of money. Literally tens of thousands of dollars a year.

Among those affected are AIDS patients:

Some plans sold on the online insurance exchanges, for instance, don’t cover key medications for HIV, or they require patients to pay as much as 50 percent of the cost per prescription in co-insurance — sometimes more than $1,000 a month.

The just-quoted Washington Post article attempts to frame this problem as one of “discriminatory plan design” engineered by intractably evil insurance companies. What a hoot. The exchanges themselves have approved the plan designs involved. Who do they think they’re kidding?

Emanuel’s arrogant dismissal concerning doctors — never forget that he has been selected to advocate the White House’s pet cause — also applies here. If you like your current prescription drug regimen, you can stay on it, but in many cases you’ll have to pay for it yourself. If you can’t afford it, well, too bad, so sad. Again, we have to assume that the administration is getting the result it wanted.

Thus, beginning on January 1, the exchanges will start serving as de facto financial barrier-building “death panels” for seriously ill patients even before the bureaucratic monster known as the Independent Payment Advisory Board has a chance to begin its own version of serious medical rationing. Sarah Palin was even more right way back in 2009 than she knew.

Finally, there are the administration’s bogus “enrollment” claims.

We’re supposed to believe that 365,000 households “enrolled” in Obamacare exchange plans as of November 30, even though the administration has acknowledged some double-counting. The far larger validity problem lies in estimates that only 5 percent to 15 percent of those who have “enrolled” (i.e., between roughly 18,000 and 55,000, assuming no duplicate enrollments) have paid their first-month premiums.

Time is running short. One health insurance industry expert believes “a plan will be lucky if half of applicants pay first month’s premium on time for January coverage.” Team Obama is so short of its original goal of 7 million enrollments that it’s trying to deny that the target ever existed.

Obama’s repeat performance of his “income inequality” schtick indicates how desperate he and his administration are to distract the American people from the oncoming, virtually inevitable, and from all appearances deliberate crack-up.