Newt Gingrich has taken to characterizing President Barack Obama as “the food stamp president.” That description of 1600 Pennsylvania Avenue’s current occupant is factually correct, both narrowly and broadly. Stating that fundamental truth does not make Gingrich or anyone else a racist, as leftist smear merchants in government, the Democratic Party, and the establishment press want America to believe.

Participation in the food stamp program, technically known as SNAP (Supplemental Nutrition Assistance Program), has increased by 44% from 32.0 million in January 2009 to 46.2 million in October 2011, the last month for which data is available. During that time, the average monthly benefit per person has increased by over 18% from $114 to $135, even though the costs of food eaten at home have increased by only 5%, and even though gross benefits before deductions for income and assets three years ago roughly approximated what was needed to maintain adequate nutrition on a “thrifty meal plan.” Monthly program costs have increased by over 70%, from $3.6 billion to $6.2 billion.

So-called “fact-checkers” in the press are of course focusing on Gingrich’s one slightly wrong (for now) statement that “more people have been put on food stamps by Barack Obama than any president in American history.” That’s not exactly a whopper, especially in comparison to Obama howlers like “If you like your health care plan, you will be able to keep your health care plan” and “My mother, who was self-employed, didn’t have reliable healthcare,” or even “The detention facilities at Guantánamo … shall be closed as soon as practicable, and no later than 1 year from the (January 22, 2009) date of this order.” Press hacks who have been falsely claiming during the past few days (examples here, here, and here) that more Americans were on food stamps under Bush than under Obama are making Gingrich look like George Washington by comparison on this issue.

The food stamp rolls indeed increased by 14.7 million under George W. Bush compared to “only” 14.2 million under Obama (so far). But Bush’s figure works out to an average of about 153,000 additional recipients per month during his eight years in office. Monthly additions during Barack Obama’s first 33 reported months have averaged 431,000. During the economy’s relatively strong years of 2005 through 2007, the food stamp rolls stayed relatively steady at 25-27 million. In the past fiscal year under Obama, while the economy added over 1.6 million seasonally adjusted jobs, the food stamp rolls still grew by over 3.3 million. Finally, food stamp program spending under Obama is on track to exceed all that was spent during Bush’s eight years by June, the administration’s 41st month.

More broadly, food giveaways under all guises have exploded under Obama. School food program costs have increased by 22% during the past three fiscal years, even though it should be obvious that the government is already paying many kids’ parents to feed them through food stamps. Women, infants, and children? Up 16%. Other food distribution programs? Up 52%. With all of this spending, what’s the main nutrition-related problem facing the country, even more among those in poverty than among the general population? You guessed it: obesity.

When the first of the bogus “food stamp challenges” began appearing throughout the country about five years ago, Mona Charen wrote:

Why is it that whenever you listen to a Democrat you feel that the year is 1966? They seem to live in a time warp in which no progress has been made on race relations, poverty, childhood malnutrition, and on and on.

Indeed. The “food stamp challenges” still occur quite frequently — eight Democratic congresspersons participated in one late last year designed to “prove” that they could not feed themselves on $4.50 a day — even though per-person benefits are 50% higher than they were when the idea was conceived.

As to Charen’s reference to race relations, the biggest smear of all coming from defenders of the indefensible is that anyone who points out that federal food assistance programs are too expensive, duplicate services, lack appropriate controls, and have eligibility criteria which are far too generous must be a racist. NBC’s Ann Curry went after Gingrich with that arrogant assertion on January 19, asking him, in light of his “food stamp president” criticism, “Are you intentionally playing the race card to win votes?”

When conservatives care about the poor and conservatives offer ideas to help the poor, and conservatives suggest that the poor would rather have a paycheck than a food stamp, the very liberals who have failed them at places like the New York Times promptly scream “racism,” because they have no defense for the failure of liberal institutions which have trapped poor children in bad schools, trapped them in bad neighborhoods, trapped them in crime-ridden situations. Liberal solutions have failed, and their only answer is to cry “racism” and hide.

That said, Newt could have and should have gone farther and turned the racism charge back on Curry and the editorialists she quoted at the Times — as all sensible conservatives should when confronted with similar slime. 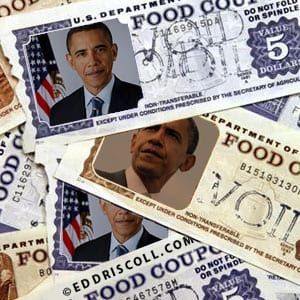 You see, Curry believed her question to be valid only because she assumed that blacks make up a wildly disproportionate share of food stamp recipients. They don’t. In 2010, the population living in poverty as defined by the Census Bureau was 23% black. In fiscal 2011, blacks who identified their race made up 22% of all food stamp recipients, and 30% of those who self-identified their race (27% of participants did not self-identify).

So, Ann Curry and all you other leftists, why do you assume that food stamp program participants are disproportionately black when it clearly isn’t so? It’s quite racist for you to believe that, and you wouldn’t have asked the question if you didn’t.

Criticizing the food stamp program and the president who has grown it like no other predecessor isn’t about racism. It’s about controlling its costs, making sure that benefits only go to those who need them, figuring out ways of getting people self-sufficient to the point where they no longer need to participate — and sending the guy under whom the program’s irresponsible growth has occurred into retirement.