One of the definitions of “loot” as a verb is: “to rob, as by burglary or corrupt activity in public office.”

Excuse the pun, but as bankrupt Solyndra sinks into the sunset, two levels of needed lesson-learning to prevent future looting as just defined are not taking place.

The first lesson should be that there are consequences if you do something extraordinarily dumb, and even more serious consequences if you commit criminal acts. I’d like to be wrong about this, but it looks like those responsible for this debacle will never be brought to account for offenses ranging from colossal incompetence to serious criminal malfeasance. (A convenient low-level scapegoat has resigned, but landed on his feet at a lefty think tank.) Because of this, it’s reasonable to expect that there will be similar future failures, possibly larger in scope.

That Solyndra requires a top-to-bottom forensic audit could not be more clear, both to determine what its executives knew and when they knew it concerning the company’s dreadfully obvious lack of viability, and to determine how much money was drained from it by excessive and possibly fraud-driven spending.

Is the necessary unfettered investigation occurring? The FBI has raided the place, but Solyndra management is stonewalling. With government acquiescence, Solyndra’s key investors moved themselves, possibly illegally, to the front of the line in priority during bankruptcy. One of those investors is a prominent Democratic Party campaign contributions bundler. Eric Holder, Obama’s chief protector, is attorney general. You do the math.

The guess here is that Solyndra’s execs knew that the company had little if any chance of surviving shortly after and possibly even before it began drawing down its loan-guarantee money. Yet they kept drawing and drawing. Why? The explanation seems to go far beyond merely wishing to keep themselves and others employed.

Fundamentally, the company’s business model was terminally flawed. It would have been an embarrassment both to the company and the Obama administration to admit as much. As Grace Wyler at Business Insider explains:

Its unique cylindrical, silicon solar cells were innovative, but only made sense when solar panel prices were high. By the time the Department of Energy (DOE) approved Solyndra’s loan — the first granted by the department’s loan guarantee program — Chinese and Canadian manufacturers with low-cost structures had priced Solyndra out of the market.

Solyndra’s management had to know this. Even if they didn’t tell those in the government who reviewed its loan-guarantee application (and of course they should have), anything resembling decent due diligence should have identified the problem. But, as Wyler notes, due diligence wasn’t a priority: In March 2009, “Solyndra’s loan application … was fast-tracked through the DOE, despite the fact that the department had not completed its review of the company’s financial viability.” The folks at the Office of Management and Budget, which did raise some financial questions about the deal before approving it in September 2009 — after also getting pressure from others in the White House to speed it along — likely did not have the technical or market knowledge to know what DOE could have and should have detected.

Solyndra’s spending spigots were wide open even before the company got its government-guaranteed money. The firm’s S-1 Registration Statement for its withdrawn attempt at an initial public offering, which included the now-infamous “going concern” opinion from PricewaterhouseCoopers, revealed that it had already spent $415 million on property, plant, and equipment by the end of 2009. From the time its $535 million in loan guarantees was approved until it shut its doors, the company spent roughly $300 million more on what was touted as an advanced manufacturing facility; it had hoped to spend $80 million more before repeatedly selling its product at an out-of-pocket loss caused the money well to run dry. All told, the company “invested” over $700 million to make a high-tech yet relatively uncomplicated product: “photovoltaic systems for commercial rooftops.” By comparison, Honda Manufacturing of North America built a complete 1,700-acre automobile assembly plant in Greensburg, Indiana, for $550 million.

As I wrote in September, “Someone needs to look into the pricing of that equipment, who the seller or sellers were, and whether the items involved were purchased in arm’s-length transactions.” The outsized amounts involved appear to betray a strong likelihood of self-dealing and kickbacks. Since the company had a calendar year-end for financial reporting, this problem would especially apply to transactions completed this year.

The second and far more fundamental lesson is that start-up and early-stage deals like Solyndra should not be financed with loans in the first place — and wouldn’t be financed that way without the federal government’s guarantee of such loans.

While a popular joke has long held that a bank will only lend you money if you don’t need it, the truth is that a bank should only lend you money if it’s supremely confident that you will be able to pay them back. Banks don’t take ownership interests in the businesses to which they lend. They instead allow businesses to rent money, and earn interest as their return. In a market free of government intervention, banks wouldn’t rent their money to start-up businesses — not because they’re hostile to them, but because their business model has almost no room for borrower failure. 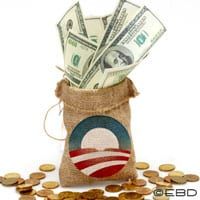 A significant percentage of start-up businesses fail in a relatively short time. Guidance shown here indicates that half fail within five years, and 70% do so within ten — and the period studied (1992-2002) was relatively prosperous. In an intervention-free market, a deserving start-up or early-stage business requiring significant amounts of capital obtains it from investors who end up taking an ownership interest, often a controlling one. It often takes multiple rounds of investment before a company reaches self-sufficiency. Investors in these enterprises, who usually make multiple bets while hoping that at least some of them will work out well, are fully aware of the risks and the high incidence of failure, and expect very high returns as compensation when they cash out, usually by selling the enterprise to someone else or going public.

Picking winners and losers in business is not the realm of government, and it’s not the realm of banks. To the extent that politically driven governments and unqualified banks are involved in such funding, society’s limited capital has been and continues to be seriously misallocated and squandered.

Even after solar company failures resulting in stunning taxpayer losses, politicians like Massachusetts Governor Deval Patrick and President Obama insist that they have no regrets. What they’re engaged in isn’t lending; as defined above, it more closely resembles looting. It apparently won’t stop until Patrick, Obama, and people who agree with them are driven from public office.

(Artwork based on a modifed image from Shutterstock.com.)