Last week, longtime business reporter Felicia Taylor at CNN interviewed several people with possibly better abilities to see the future than the analysts and economists on whom the establishment press normally relies: psychics.

While misguided, I can understand why Ms. Taylor felt the need to seek alternative economic forecasting. It must be really frustrating to place trust in a bunch of alleged smarties who routinely churn out predictions that are consistently and predictably — but somehow “unexpectedly” — wrong.

There’s little doubt that journalists are getting a bit touchy about using “the U-word,” especially since, far more often than not during the past several years, it has meant “unexpectedly bad.” On Tuesday, in the wake of yet another downward slide in consumer confidence after “experts” had predicted improvement, both Bloomberg and the Associated Press let the U-word slip into their initial reports but purged it in later revisions.

Speaking of revisions, most Americans are probably unaware of what has happened to initial government data since Democrats took control of Congress in 2007. In revisions over the following months and years, already “unexpectedly” bad results have almost invariably gotten worse — often much worse. This situation began to go code red (or really “code blue”) once the POR (Pelosi-Obama-Reid) Economy and the recession as normal people define it kicked in three years ago.

Take economic growth. As seen below (full details here), in the 17 quarters starting in 2007, the decline between the Bureau of Economic Analysis’s advance estimates of annualized growth in the nation’s gross domestic product (GDP) and the revised figures currently at the BEA’s web site has averaged 0.58 points:

That may not seem like much, but the average growth currently reported during those 17 quarters (0.73%) is 44% lower than the average of the initial reports (1.31%). In the third and fourth quarters of 2008, the first two quarters of the real recession, opening GDP contraction estimates of -0.3% and -3.8%, respectively, cratered to -4.0% and -6.8% after revisions. Sure, the economy was much worse than Pelosi, Obama, Reid, and the Democrats thought, but as I have previously shown, they’re the ones who caused it to turn out that way. By comparison, currently recorded average annualized quarterly GDP growth during the Bush 43 years of 2003 through 2006 is only 9% lower (3.02%) than what was originally reported (3.31%). 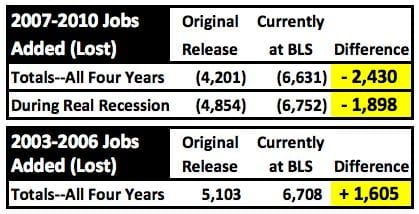 From 2007 to 2010, initial reports from the Bureau of Labor Statistics (BLS) told us that the economy lost 4.201 million jobs. BLS revisions have thus far ramped up the number of jobs lost by 2.43 million. The four-year total is now 6.631 million — a stunning 58% increase. As seen above, the bureau’s revisions to the 12 months of the real recession (July 2008 through June 2009) have shot reported job losses up by almost 1.9 million, a jaw-dropping average of 158,000 per month.

They’re not done yet. Every February, BLS performs a comprehensive “benchmark revision.” The next one will affect the period from March 2010 through December 2011. Considering the results of the past four years showing average additional job losses of 415,000, the next benchmark revision seems destined to push the figures even higher.

Why did the revised data largely improve (or at least decline very little) from 2003 through 2006, while decaying horribly since 2007? Frequent BizzyBlog commenter “JoeC” formulated the foundation of the negative side of what I call “revisionomics” almost four years ago, and worked up the positive side earlier this year. Paraphrased a bit, they are as follows:

Though they should, economic forecasters don’t take the Democrat or Conservative Effect, whichever happens to be in force, into account when formulating their predictions. As long as this remains the case, and as long as the Obama administration stays on its current course of reckless spending, regulatory tyranny, and childish insistence on tax increases that will self-evidently make things worse, one does not need to possess psychic powers to know that we can count on “unexpectedly” bad economic news followed by additional, steep downward revisions.