A month ago, the federal government put out the real news about its financial condition as of September 30, 2010, the most recently ended fiscal year. Predictably, it was barely noticed — partially because the establishment press is disinterested in such things, and partially because of the report’s exquisitely timed release the week before Christmas.

For 14 years, a law with a poorly predictive name — the Federal Financial Management Improvement Act of 1996 — has required that Uncle Sam publish consolidated financial statements using generally accepted accounting principles (GAAP), and that the Government Accountability Office (GAO) report on those statements. For the fourteenth consecutive year, the GAO was unable to render an opinion on them, because “weaknesses in federal financial management” prevented it from doing so.

Specifically, the main obstacles to a GAO opinion were: (1) serious financial management problems at the Department of Defense that made its financial statements unauditable; (2) the federal government’s inability to adequately account for and reconcile intragovernmental activity and balances between federal agencies; and (3) the federal government’s ineffective process for preparing the consolidated financial statements.

In September, I pointed out that although the reported fiscal 2010 deficit, using the government’s own set of accounting rules, was going to come in lower than 2009, Uncle Sam’s cash spending deficit (i.e., receipts less disbursements) would come in significantly higher. The GAO’s presentation of the GAAP deficit, with the final two lines below added by me for clarity, proves that contention: 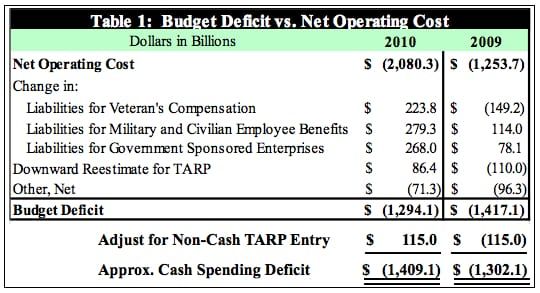 The government has been able to concoct an illusion of improvement because the Obama administration’s Treasury Department booked $115 billion in “losses” in the Troubled Asset Relief Program (TARP) in fiscal 2009 before it had sufficient evidence that setbacks of that magnitude would occur. In fiscal 2010 — shazam! — Treasury’s estimated TARP losses were revised far lower, enabling it to bury a gain of the same amount in its March 2010 monthly statement.

As shown above, after taking this accounting flimflammery out of the picture, the fiscal 2009 and 2010 deficits based on receipts and disbursements were really $1,302.1 billion and $1,409.1 billion, respectively. In other words, last year was about 8% worse than the year before, certainly not better. It is not without cause that radio talker and Liberty and Tyranny author Mark Levin called President Obama “the most profligate, irresponsible spender in world history” on his January 18 program.

Uncle Sam’s GAAP deficit, seen above as “Net Operating Cost,” was even greater, amounting to $2.080.3 trillion. This dwarfed the comparable number of $1.253 trillion in 2009. The increase occurred because the government’s obligations to its military retirees and veterans, civilian retirees, and its functionally bankrupt government service enterprises Fannie Mae and Freddie Mac exploded. More depressing: In 2008 and 2007, the comparable fully-loaded deficits were “only” $1.01 trillion and $275.5 billion, respectively. Again, a situation that was breathtakingly bad in fiscal 2009 got “progressively” worse in 2010.
How about Social Security and Medicare? Well, there’s bad news and, as is often the case with this bunch, pretend good news. The bad news, as seen here, is that the government’s actuarial liability for Social Security jumped by $270 billion in fiscal 2010 to almost $8 trillion. The program now runs at a deficit during most months. Without changes, Social Security will hemorrhage cash at an ever-increasing rate in the coming years.

As to Medicare, the government claims at that same link that its actuarial liability for that program decreased by $15.3 trillion, a stunning turnaround it attributes to the passage of ObamaCare. Here what the GAO had to say about that assertion:

Significant uncertainties […] primarily related to the achievement of projected reductions in Medicare cost growth reflected in the 2010 Statement of Social Insurance, prevented us from expressing an opinion on that statement.

That’s polite accounting-speak for: “Though we can’t prove it, we think it’s a load of rubbish.”

In October through December of 2010, the first three months of fiscal 2011, the government’s detachment from financial reality only increased, and its march toward the abyss accelerated.

Except for seemingly endless unemployment benefits, the Obama administration’s stimulus programs, which really ended up stimulating nothing —  especially employment — are supposedly over. Logically, federal spending should be going down. Nope. Outlays from October through December of 2010 were about 3% higher than the same three months of last year. That may not seem like much, but given that cash spending in fiscal 2010 was about 20% higher than it was just two years earlier, there’s no excuse for it.

Meanwhile, though federal receipts have increased by 9% over the first fiscal quarter of last year, they’re coming in well behind where they need to be to meet the Congressional Budget Office’s most recent full-year fiscal 2011 projected increase of well over 20%. Moreover, it’s federal income tax collections that are up, while Social Security and Medicare collections continue to plummet, even before this calendar year’s 2% Social Security tax cut kicks in. Social Security and Medicare collections were over 4% lower during the most recent quarter compared to the fourth calendar quarter of last year, and were a stunning 12% lower in December 2010 compared to December 2009.

The irony of all of this is — pun intended — rich. Despite this administration’s egalitarian rhetoric, the combination of upward movements in income tax collections combined with declining Social Security and Medicare receipts is a clear sign that many of the nation’s highest earners are prospering as they never have before, while the Democrats’ supposedly favored “working people” are earning less.

These very real numbers paint a portrait of a country in serious trouble led by an administration that seems hellbent on driving it over the cliff — while the Federal Reserve’s quantitative easing ensures that we’re hurtling down a greased runway.

It’s up to the new House majority in Washington to stop the train for the next two years, in the hope of finding a new driver in 2013. Putting real teeth into spending reductions in return for raising the debt ceiling would be a decent first step. Frequently using disapproval resolutions to stop the most harmful new regulations would also help.

Any lawful means necessary must be employed. It’s not a stretch to say that our country’s survival as we know it may be at stake.