GM-PAC? GOP Should Just Say No — But They Won't

You try to tell yourself that you’re not really seeing this: 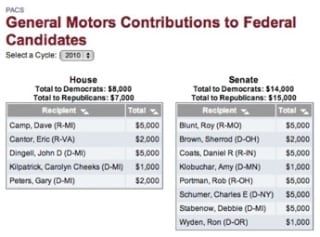 When you convince yourself that your eyes really aren’t playing tricks on you, you can’t help but wonder: How in the world is this even possible?

First, how is a U.S. government-controlled entity legally allowed to form a political action committee (PAC)?

Oh, I forgot. Despite the fact that it is 61% owned by the United States government and 12% by Canada and the government of Ontario, and despite the fact that the United States government has a car czar and a cadre of cronies clearly overseeing affairs at the company (if you doubt, ask yourself why CEO Ed Whitacre suddenly “stepped down” mere days after he told an audience: “We want the government out. Period. … We don’t want to be known as ‘Government Motors'”), General Motors is technically a “private” company. Though it has been doing so since late last year, the company isn’t legally required to file financial statements with the Securities and Exchange Commission. One gets the sense that GM feels like it deserves the world’s admiration for deigning to bless us with its financial information.

Despite taxpayers’ majority stake, GM has revived its PAC and has collected and distributed money from its employees to advance the company’s interests. Those interests, and the politicians and organizations which have benefited and will benefit, are, according to the company’s “Political Contributions and Expenditures Policy,” determined “by a Steering Committee and a separate Campaign Selection Committee appointed by the Chief Executive Officer of GM” — overseen by car czar and Mao admirer Ron Bloom (“We know that the free market is nonsense. … We kind of agree with Mao, that political power comes largely from the barrel of a gun”) and his clan.

There’s nothing wrong with shareholder-owned and truly private companies doing this. Companies have a duty to ethically advance and protect their shareholders’ and owners’ interests, especially when government actions threaten their well-being. The Supreme Court ruled in January that companies, labor unions, and others are free to do this, and that Congress’s past efforts to limit their giving have been unconstitutional.

Legalities aside, GM is self-evidently different. First, the policy statement cited earlier also permits “corporate funds and facilities … (to) be used to provide the administrative support for the operation of GM political action committees.” That gives a whole new meaning to “your tax dollars at work,” doesn’t it?

Far more critically, as long as two sovereign governments have combined majority or controlling stakes in the company, political contributions from GM’s PAC are substantively no different than if HHS Secretary Kathleen Sebelius started taking collections from her employees and then gave the money directly to congressmen, senators, Health Care for America Now, and anyone else who has either said good things about ObamaCare, voted for its creation, or pledged to assist in building its oncoming bureaucratic nightmare. If the president and his apparatchiks had even a passing acquaintance with ethics, they would not have allowed GM to resurrect its PAC.

But if you concede the PAC’s continued existence, you’re then forced to ask: How can the GOP candidates listed above defend taking its money? This is not a situation where letting bygones be bygones is even remotely appropriate.

This is the same General Motors whose government overseers in bankruptcy, fresh from ripping off disfavored secured creditors at Chrysler, performed a similar act on GM’s unsecured bondholders — real flesh-and-blood people who have suffered tremendously.

This is the same General Motors that, as it was shafting creditors, gave the United Auto Workers a deal so sweet that union president Ron Gettelfinger openly bragged to his members that the union’s supposed “concessions” involved “no loss in your base hourly pay, no reduction in your health care, and no reduction in pensions.” UAW-GM retirees, who conveniently don’t get to vote on contracts, also got the shaft.

This is the same GM which, with White House help as it was keeping the UAW whole, “schemed with Big Labor bosses to preserve UAW members’ costly pension funds by shafting their nonunion counterparts” — including 20,000 former salaried employees at Delphi, who also “lost all of their health and life insurance benefits.”

This is the same General Motors whose government overseers, according to TARP Inspector General Neil Barofsky, as reported by the New York Times, closed “scores of dealerships without adequately considering the jobs that would be lost or having a firm idea of the cost savings that would be achieved.” The jobs losses amounted to tens of thousands. Closure decisions appeared to have been based more on political and racial factors than valid economic considerations. Before the termination decisions were announced, GM’s minority-owned dealers fretted that almost 60% of them (roughly 174 of 300) would be shut down. As it worked out, both at Chrysler and GM, they were closed in virtually exact proportion to all other dealers. Amazing how that worked out, isn’t it?

I have seen no indication that GM and the administration have any intentions of retreating from their legalities-be-damned, consequences-be-damned outlook. And yet, we see the names and amounts listed above: Portman — $5,000; Blunt — $5,000; Coates — $5,000; and “Young Gun” (or is it “Young Blank”) Eric Cantor — $2,000.

Seriously, guys: How could you? Until you return the money, how can we ever believe anything you tell us about the capitalist, free-enterprise system and your support for the Constitution?

This sad episode should disabuse sensible conservatives of any notion they might have that they will be able ease up even a teeny-tiny bit if the fall elections result in GOP congressional and Senate majorities.