Inside the Beltway, the world seemingly turned rosy last week. Establishment media outlets got all excited about the Labor Department’s report that the unemployment rate dropped to 10% in November and that the month’s 11,000 seasonally adjusted jobs lost was the lowest such figure in almost two years.

But a closer look at the not seasonally adjusted job gain/loss numbers during the past three months — that is, what has actually happened on the ground — reveals that the “good news” is more than a little illusory: 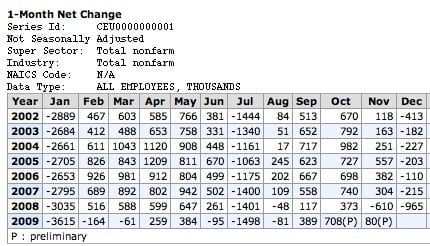 Comparing 2009’s monthly actuals to the average of 2003-2007, when the economy was doing well, you will see that after some improvement in October, the situation actually worsened in November:

Beyond all that, Americans continue to withdraw from the workforce. Since June 2008, at about the time when what I have been calling the POR (Pelosi-Obama-Reid) economy began, after five years of barely budging, what the government calls “the labor force participation rate” has dropped from a seasonally adjusted 66.1% to November’s 65.0%. That may not seem like much, but as a result over 2.5 million fewer people are working or looking for work than if that rate had held steady. (These people are, by the way, not considered in the primary unemployment rate calculation.)

Where did all these people go? Many of them retired for Social Security benefit collection purposes. A December 7 Wall Street Journal article noted that fiscal 2009’s 21% increase in the number of Social Security retirement applications was well above the 15% uptick the Social Security Administration expected. Many who began collecting benefits clearly did so earlier than they would have liked because they lost their jobs and their immediate employment prospects were so grim. Though they did so knowing that they would collect less in monthly benefits, I suspect that many of them had no idea that finding even part-time work might jeopardize part or all of those reduced benefits. But that is indeed the case, thanks to the remnants of an anachronism known as the Social Security earnings penalty.

Though it was much more onerous before it was partially repealed in the late 1990s, the earnings penalty is still a brutal disincentive to new or continued full-time employment. Straight from the Social Security Administration itself, here is how it works against work (FRA, or full retirement age, is between 66 and 67 for most non-retired readers): 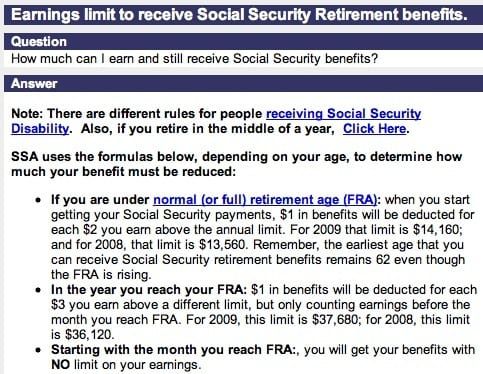 Those affected who are unaware of the penalty and attempt full-time, year-round work experience an effective tax rate of 50% on annual earnings above the small amounts noted above. They also still pay Social Security and Medicare taxes of 7.65% (15.3% if self-employed) on their earnings, as well as any federal, state, or local income taxes. Subtract commuting and other related costs, and these people quickly figure out that they’re working virtually for free. So they stop working when they hit the annual limit or shortly thereafter and try to start over the next year. That’s obviously not a way to keep one’s skills or work ethic sharp.

Repealing the earnings penalty effective January 1, 2010, would encourage early Social Security retirees who want or need to work to find year-round employment that will pay well. It will give employers who are dying to find something they can count on in this uncertain economy a pool of as many as a few hundred thousand proven, productive, and talented people who will help businesses and the economy as a whole return to legitimate, sustainable growth. Growing businesses should in relatively short order be able to hire others to do work that needs to be done. It’s even possible that total tax collections at all levels of government might actually increase as a result of repeal.

Passing repeal should be a no-brainer. I can’t think of a single credible reason why anyone would oppose this. The only conceivable objection is that it might shut some younger people out of the workforce.

But that objection disappears when you consider the supposed current mindset of Congress and the administration. Despite the evidence presented earlier, they really seem to believe that happier or at least less unhappy days are here again in the employment market. If so, they need to put up or shut up. Getting skilled, experienced people back into the economy will get it moving on a more permanent basis. After that happens, expanded opportunities for the younger and less skilled will come soon enough. Obama, Pelosi, and Reid simply need to set aside enough time from their statist health care machinations and their carbon-based obsessions to kick this relic of the FDR Depression era to the curb once and for all.