Thanks to how the establishment heavily filters environment- and climate-related news — with more than a little irony, you might call it a bad-news blackout — a large majority of Americans, particularly of the 85% to 86% of us who are for better or worse relatively disengaged, likely believe that:

Without the indispensable CCNet email from English climate policy analyst Benny Peiser, yours truly could be buying into some or all of the above conventional “wisdom.” None of the above bulleted items is even remotely true.

The House’s passage of cap and trade hasn’t impressed the three countries that matter most, namely India, China, and Russia.

On Sunday, “[Indian] environment minister Jairam Ramesh asserted … in the presence of visiting U.S. secretary of state Hillary Clinton that India would never take legally binding commitments to cut down on emissions.”

China? Yeah, like we’re in a position to boss around our biggest lender, whose holding of U.S. Treasuries at the end of May, at over $800 billion, was 60% higher than a year earlier, and where in early June an audience of students broke out laughing when Treasury secretary and tax cheat Tim Geithner tried to tell them that “Chinese assets [invested in the U.S.] are safe.” That same month China, identified as the world’s leading emitter two years ago, “announced that they would not participate in a global initiative to control climate change air pollutants.” Russia did the same.

This means that the world’s number one, three, and four emitters, according to this 2006 chart with supporting spreadsheet, aren’t on board and aren’t about to get on board, no matter what kind of “example” we set.

But even if the U.S. ultimately chooses aggressive carbon-reduction targets, thereby, according to many predictions, slitting its economic wrists and voluntarily becoming “a second-rate economic power” in the process, it won’t do much to stop worldwide emissions growth. The spreadsheet referred to earlier shows that China’s annual emissions increased by 600 million metric tons of CO2 per year from 2003 to 2006. If that country’s emissions have continued to grow at that rate, its emissions are already 30% higher than ours. Projecting further ahead at that same rate, China’s emissions will double ours by 2016. Even the EPA has had to sheepishly admit to the fundamental truth that the U.S. alone can do little to affect overall worldwide emissions growth.

In any event, the rest of the world isn’t eagerly jumping on board the CO2 reduction bandwagon. Earlier this month at the G8 summit, all the rich and developing countries could agree on was “only to ‘substantially reduce’ global emissions by 2050,” with no concrete goals. This result led Peter Glover of the Energy Tribune to predict that very little will be accomplished at the United Nations-sponsored Copenhagen conference on climate change in December. In fact, Glover opined, “all the signs are that Michael Jackson has a better chance of recording new material than Copenhagen has of delivering a meaningful international accord.”

The reaction from Paul Taylor of Reuters to the summit’s lack of results was not nearly as humorous:

So the planet is saved after all. Before you crack open the low-carbonated champagne, consider the weasel wording of the Group of Eight summit communiqué. …

Are such carefully hedged words worth the paper they are printed on? What are these politicians committing themselves to do during their own term of office? Most will be dead and buried by 2050.

There’s your clue to why the three fundamental untruths I noted at the beginning still have popular currency.

That the press in general is sympathetic to the tenets of global warming and environmental alarmism in general is nearly beyond dispute. But Reuters, the wire service that U.S. news outlets heavily rely on for international news, has taken its environmental bias further and has crossed the line into open advocacy.

Consider a few graphics I captured at various Reuters reports during the past week. Here are the first two: 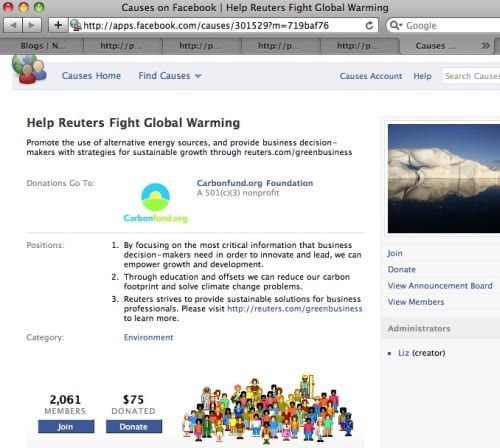 On the top is a link I have frequently seen that tells the world that fighting global warming is a Reuters cause. It links to the wire service’s related Facebook page, called “Help Reuters Fight Global Warming.”

Reuters has decided as a company that global warming is “settled science,” even though there is plenty of evidence that the seriousness of the issue, or even its existence, is far from settled. Though the page clearly has many members, it just as clearly doesn’t have many who are willing to put their money where their mice are.

Nonetheless, Reuters has clearly taken sides. It shouldn’t surprise anyone that commentary like Taylor’s above would spew forth in such a corporate culture, or that the following would be considered worthy of carriage: 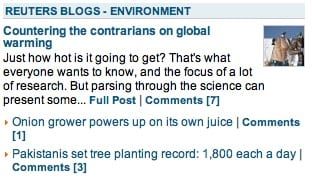 Can they possibly be any more blatant about it?

No wonder we learn so little of the growing opposition to radical environmentalism run amok overseas. The open global-warming advocacy at Reuters, which we should recall was the originator of Palestinian-supporting fauxtography in 2006, is disgraceful and should stop. Short of that, news consumers need to aggressively look elsewhere for the truth.