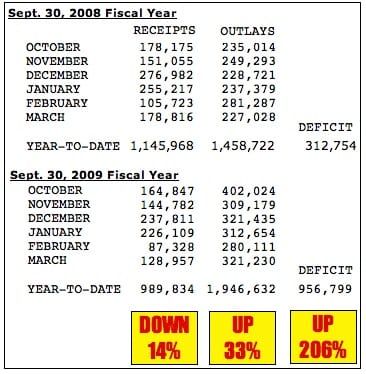 If spending continues at the rate seen during this year’s first six months, the government will exceed last year’s outlays on July 6.

There’s little reason to believe the spending spree will slow down.

Even in supposedly routine areas, outlays have ballooned. Here is a short list of how some departments have been hemorrhaging dollars in comparison to last year:

Then there are the new spending monsters on the block. The Troubled Asset Relief Program (TARP) has disbursed $293.5 billion out of the $700 billion Congress authorized in early October. Much of it was “given” to banks with a (figurative) gun pointed to CEOs’ heads. There is strong evidence that Treasury Secretary Tim Geithner and President Barack Obama are refusing TARP repayments from larger banks that want to get out from under the government’s current and imminent onerous terms. Does anyone want to bet against the remaining $400 billion-plus being forced out to either the willing or unwilling?

Remember Fannie Mae and Freddie Mac? Those were the government-sponsored enterprises Barney Frank, Maxine Waters, and other Democrats said were in ship shape not too long ago. Through March, Frank, Waters, et al. have “only” been wrong to the tune of almost $60 billion the Treasury has spent to shore up whatever remains of those two entities. This amount, by the way, roughly matches the worst estimates of the total losses from Enron, with one important difference: Investors and employees primarily ate Enron’s losses. Taxpayers are on the hook for Fan and Fred. Does anyone seriously think those two entities are done draining the Treasury?

Oh, and it’s going to get worse before it gets better (if it ever does). Not only has spending rocketed, but as you can see above, receipts have also fallen precipitously.

Just think: It was a bit less than a year ago at this time that we were celebrating the “supply-side stunner,” the fact that Uncle Sam’s April 2008 tax collections came in at an all-time one-month record of over $400 billion. Those collections not only included final payments of 2007 taxes due, but also first-quarter estimated tax payments for individuals, many of whom are small- and medium-sized business owners. As I wrote at the time, “The increase may not only reflect that entrepreneurs and the self-employed had pretty decent years in 2007, but that many of them are thinking, in the face of relentless media harping to the contrary, that 2008 will be at least as profitable.”

At that point, there was every reason to believe that the economy, which had gone through a tough fourth quarter of 2007, was back on track towards resuming decent growth. Indeed, the first two quarters of 2008 had positive GDP growth and the second quarter’s annualized 2.8% was far from tepid.

But then in mid to late June, along came the POR (Pelosi-Obama-Reid) economy. The Democratic triumvirate’s intent to starve the nation of energy, regardless of the consequences, and newly minted presidential nominee Barack Obama’s designs on punitively taxing 5% of the nation’s most productive in the name of redistributing money to everyone else, both became crystal clear. As a result, paraphrasing what I wrote at the time, businesses, investors, and entrepreneurs responded to the trio’s total lack of seriousness by battening down the hatches and preparing for the worst.

They haven’t stopped, which is why the POR economy is now the POR recession as normal people define it. It is also why tax collections have taken a dive.

March is supposed to be a big month for tax receipts from regular corporations whose years end in December. In March 2008 (go to Table 3 on page 2 at the link), $32.6 billion poured in. This year? I’m not kidding: $3.4 billion. For the fiscal year thus far, corporate income tax collections are down almost 57%.

Through March 31 of last year, according to the Daily Treasury Statement, “individual income and employment taxes not withheld,” which are largely payments made by the self-employed, partners, and those in S corporations whose income flows through to individual tax returns, are down about 13%, or almost $15 billion, from a year ago. These not-withheld taxes are what drove last April’s all-time collections record, which is definitely not going to repeat itself.

It’s clear that quite a few ordinarily industrious people “went Galt” months before the tea party movement even came into existence. As a result, fiscal 2009’s deficit could come in closer to $2 trillion than to the Obama administration’s estimate of $1.75 trillion, or even the Congressional Budget Office’s $1.85 trillion.

Pelosi, Obama, Reid, and their party created the conditions that led to this and are primarily responsible for how bad things are. After months of doing everything to tear down everyone’s confidence, they are the ones who are going to have to figure out how to restore it. If they can’t, it would seem that the tea partiers, a.k.a. the voters, will find others who can, as soon as they can.