A year ago, I wrote:

Think Social Security will be solvent until 2041? Think again. The next president will face rapidly growing problems by the end of his or her first term.

At the time, the concern was that the substantial Social Security surpluses we have experienced during the past 22 years would begin to shrink.

An updated version of a Congressional Budget Office chart I presented last year shows that the shrink has indeed begun (information is at the “data” link at this CBO page): 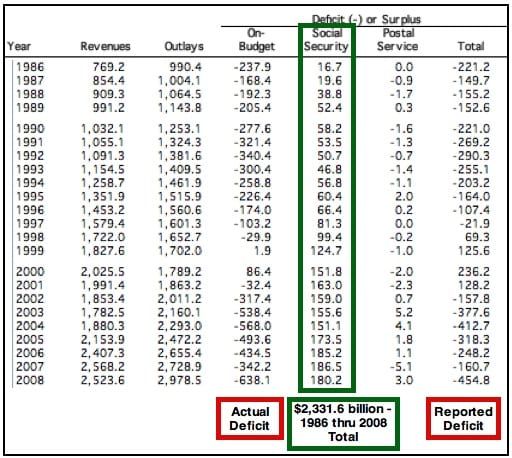 Social Security’s surplus for the year ended September 30, 2008, fell to $180.2 billion, reducing its subsidy to the rest of the government.

What? That’s right; I said “subsidy to the rest of the government.”

Social Security’s surpluses have been raked off by Uncle Sam and have subsidized the rest of the government since 1968, when President Johnson began “including Social Security and all other trust funds in a ‘unified budget.'”

At that point, as I wrote last year, “Social Security’s Trust Fund, instead of being a separate, untouchable stash of cash and investments (i.e., instead of being run like a normal pension plan), thus became money that the rest of the government could raid.”

And raid it they have, as you can see above. Since 1986, Social Security surpluses have subsidized the rest of the government to the tune of over $2.3 trillion, enabling reported deficits to be lower than they really have been. Social Security’s so-called “Trust Fund” consists of a stack of IOUs from Uncle Sam, who is now over $11 trillion in debt.

A year ago, the annual Social Security surpluses were expected to shrink to zero by 2017. That’s because, starting last year, the annual demographic wave of millions of baby boomers reaching the system’s minimum age of 62 for collecting began to hit. This wave will continue for the next two decades.

I wrote about that 2017 estimate two months or so before Nancy Pelosi, Barack Obama, and Harry Reid brought us the POR (Pelosi-Obama-Reid) economy. That Democratic-driven downturn began during June. I recognized what was happening in early July, and a week later observed that “businesses and investors are responding to their total lack of seriousness by battening down the hatches and preparing for the worst.”

In June, Pelosi, presidential nominee Obama, and Reid drove the POR economy’s initial dive, which is now a recession as normal people define it, by clearly telling investors, entrepreneurs, and business owners that an Obama administration and the congressional majority would starve the nation of energy and massively increase taxes on the productive once in power. Then their party’s decades-in-the-making disaster in the housing sector came to a head in September. Initially fueled by the collapses at Fannie Mae and Freddie Mac, the Democratic-driven housing and lax credit mess ultimately led to what has been a seemingly endless string of bailouts of the financial and then other sectors. The economy has seriously retreated and continues to perform poorly, as has the stock market.

It shouldn’t surprise anyone that, as a result of all of this, Social Security’s fiscal situation has headed downhill at breakneck speed. Tanking the economy (possibly deliberately?) has consequences.

In a mini-preview of things to come, Social Security went negative in February for the first time in decades. Outgo exceeded income by over $1.2 billion: 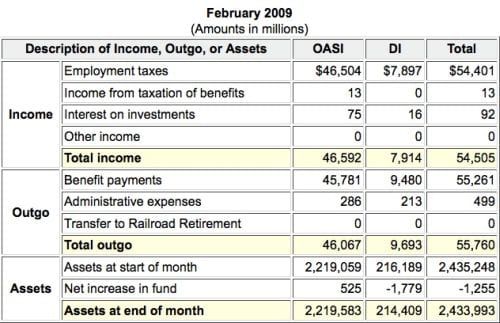 February was a bit of a fluke, because there were only 28 collection days to offset a full month’s payments. But according to the CBO, per Heritage, “the Social Security surplus will only be $16 billion this year, and only $3 billion next year”; it will show a deficit, or “go negative,” in 2011.

How can this be happening? I thought Pelosi, Reid, and the left all assured us several years ago that there was “no crisis.”

That they did. In May 2005, during the Bush administration’s weak attempt to build support for partial privatization of the system, “Pelosi accused President Bush of creating a crisis and manufacturing an issue.” Before that, in late 2004, as it became clear that Bush would try to mount such an effort, the pair jointly said, “We cannot support any plan that relies on massive and irresponsible increases in debt, which could destabilize financial markets and lead to large tax increases.” The current irony of that joint statement is provided at no extra charge.

The fact is that a crisis has been building for decades. It has seemingly come out of nowhere only because the POR economy’s recession has sharply reduced Social Security tax receipts. Any recovery in collections arising from an economic comeback will necessarily build on a smaller base. That is why Social Security is on track to go negative six years earlier than was anticipated just a year ago. If February’s monstrous stimulus package doesn’t reignite job growth, it will probably go negative in fiscal 2010. The “save” part of Team Obama’s risible “save or create jobs” goal will do nothing to increase Social Security tax collections.

Once Social Security goes negative, we will have come to the point so many have long feared we would reach. To cover the system’s cash drains, the government will have to, in some combination, raise taxes, borrow more, or reduce benefits, year after year after year.

More importantly and tragically, the “no crisis until 2040 or so” crowd, which has been lying all along, will have accomplished what I believe has been their long-term goal, which is making even partially privatizing Social Security politically and financially unachievable. It appears that they’ve “won.” The economy and personal liberty have lost. Pelosi, Obama, and Reid deserve the blame for the statists’ early “victory.”