Food Stamps for the Well-Off: A National Trend?

On March 13, Ohio blogger Matt Hurley, who has been running Weapons of Mass Discussion for over five years, received an email from “someone in the business” — specifically, the social services “business” in Warren County, Ohio, just northeast of Cincinnati (typos in original have been corrected):

There’s something badly wrong with this program that allows a family that kind of resources to still get food stamps.

This is where things have gotten to. I would think the world would want to know about this.

The emailer was only partially correct. Southwestern Ohio was interested, as Warren County and neighboring Butler County pushed back, promising to resist approving similar future aid applications. A Warren County-based state legislator has drafted a bill to tighten eligibility rules.

The fact is that many states quietly and significantly liberalized their food stamp eligibility rules last fall. An October 19 USA Today article was one of the very few that even noticed it. But in doing so, the newspaper’s Wendy Koch played down their importance:

Some states are going further to expand eligibility. Last month, California enacted a bill that will allow low-income people to keep some savings and still qualify for food aid. At least four other states — Maryland, Ohio, Pennsylvania, and Vermont — similarly eased the asset test this year.

“People won’t have to sink to ground zero to get help,” says Paul Fraunholtz, a deputy director in Ohio’s Department of Job and Family Services.

Who knew that $80,000 was “some savings”? Or that it’s barely above what Ohio’s Fraunholtz refers to as “ground zero”?

I have since learned that Ohio’s change does not appear to be as comprehensive as it first seemed; the lifting of asset limits such as not having more than $2,000 in the bank, etc., appears to apply only to certain situations (but note that USA Today’s Koch incorrectly gave readers the impression that recipients aren’t allowed to have any savings). Nevertheless, the fact is that the food stamp program’s eligibility rules and benefit structure were just fine before September 30 and there was no crying need for change. (This issue is separate from whether applicants tell the truth when they apply. That has been an ongoing problem for decades and there’s no space to address it here.)

For almost two years, advocates of program expansion have been peddling the fiction that food stamp benefits are inadequate to meet participants’ needs, claiming that the average benefit of $21-$23 per person per week is not enough to meet a person’s food and nutritional needs. They have conducted “food stamp challenges” around the country, coaxing activists, journalists, governors, congressmen, and other politicians into trying to buy and live on the aforementioned dollar amounts of food for a week. Routinely failing (of course), they have then reached the “obvious” conclusion that the government has to increase benefits to keep people from starving.

There’s only one problem: actual program benefits for those who have very low incomes and no other resources are much higher. What follows, directly from the USDA’s site, are the maximum monthly allotments (i.e., benefits) for varying household sizes, effective October 1, 2008, accompanied on the right by the weekly costs per person of various ages of what the USDA calls its “thrifty meal plan,” also as of last October (the USDA estimates costs at four levels at its “cost of food at home” page: thrifty, low-cost, moderate, and liberal): 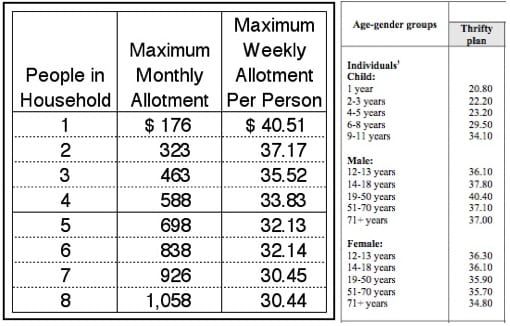 In other words, the benefit levels above give participants the ability to have what the USDA calls a “nutritious diet” if they choose to be “thrifty.” Last time I checked, it was not unreasonable to expect beneficiaries of taxpayer largess to actually be thrifty — or if they’re not, to pay the extra price themselves.

Even getting by on the bogusly claimed $21-$23 can be done. Colorado couple Ari and Jennifer Armstrong proved in August 2007 that they could buy and live on $180 worth of food in a month — the advocates’ monthly equivalent of the “impossible” $21-$23 a week — and had over $20 left over when they were done. Of course, the Denver media, many of whom attempted and of course “failed” at their own “food stamp challenge,” pretended the Armstrongs didn’t exist.

Here’s what those who want to expand benefits don’t want us to know: The average actual benefit is lower because, as the USDA states, “food stamp households are expected to spend about 30 percent of their resources on food” (from income, as the USDA defines it, and assets). In other words, if you earn enough money to be able to pay for part of your food costs, after appropriately considering other expenses and individual/family circumstances, you should do so. Imagine that.

Further, if you have enough money in the bank to pay for your own food, you should do that before running to the government for assistance. Yet running to the government is clearly what happened in the Warren County case that got the whole controversy rolling. There are now reports of similar examples coming in from other Ohio counties. In theory (but again, in relatively limited situations), there appears to be no reason why an applicant with $1 million in liquid assets couldn’t apply for benefits and get them.

This is outrageous. Since when did it become taxpayers’ duty to feed people who have more than enough money to feed themselves — even quite well?

I would suggest that taxpayers in the other states mentioned by USA Today, and perhaps others, should look into what has happened where they live, get past the nice descriptions, and find out what the social services folks have decided to do with what is, after all, your money.