The Myth of the 'Widening Gap Between Rich and Poor'

It gets repeated so frequently and so persistently that many assume it must be true: the rich are getting richer and the poor have been left behind in ever-larger numbers, especially during the eeeeeevil Bush administration.

Let’s take a look at the latest inflation-adjusted Census Bureau data from 2003 through 2007 (data is from Table A-3 at page 40 of the Bureau’s annual “Income, Poverty, and Health Insurance Coverage in the United States” publication; this Bureau page has the link to the PDF publication; more historical detail is here):

I’m using 2003 as the starting point for two reasons. First, the negative effects of the Internet bubble that occurred during the Clinton administration and of the 9/11 attacks didn’t wear off until that year. Second, the investment-related Bush tax cuts on capital gains and dividends, along with across-the-board cuts in marginal rates, finally took effect that year. The Bush tax cuts in 2001 were, unfortunately, relatively ineffectual, because they represented a one-time stimulus instead of long-term change.

Note that in the last four years the Bureau has tracked:

What’s more, the gains at the lower income levels are probably understated. That’s because the Census Bureau’s inflation-adjusted numbers don’t fully take the “Wal-Mart effect” into account. The linked OpinionJournal.com column cites outside research showing that “Wal-Mart’s 1985-2004 expansion of sales resulted in a 9.1% drop in the price of food at home, a 4.2% drop in the price of other goods and commodities, and a 3.1% decline in consumer prices overall, saving the average working family about $2,329 per year.”

The government’s Bureau of Labor Statistics (BLS) has partially missed Wal-Mart’s full-bore entry into the grocery business that has occurred rapidly over most of the past decade. A BLS employee I spoke to in preparing this column told me that the agency rotates 20% of the stores included in its price surveys annually. Thus, a new Wal-Mart superstore will take from one to five years to get into a given area’s rotation. Thus, BLS has been playing catch-up in measuring the true impact of the chain’s lower prices.

To the extent BLS’s partial omission of the Wal-Mart effect can be quantified, its impact is clearly much greater at lower income levels than at higher ones, simply because items bought there represent a larger percentage of low-income budgets. Even a few hundred bucks of real increased purchasing power at the two lowest-earning percentile cutoffs above would obviously make a big difference in the results. Even after considering competitors’ reactions, the effect is likely at least that big.

Nonetheless, even after considering the Wal-Mart effect, anyone being fair has to concede that income gains during the 1990s, especially the latter half of the decade, were more impressive. The improvement was fueled by a combination of technological advances, welfare reform, and relatively controlled spending in Washington — not necessarily in that order.

But guess what? Income inequality during the 1990s also increased, and quite significantly: 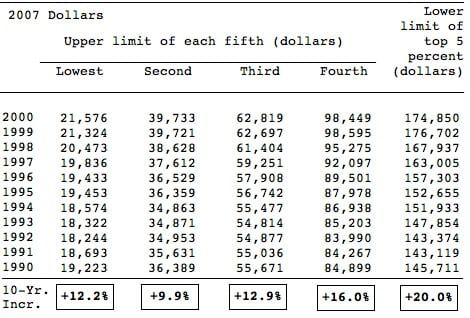 The richest 5% saw their incomes increase twice as quickly as those in lower quintiles.

Surprised? Do you not remember hearing very much about the phenomenon of growing income inequality during the 1990s?

If you don’t, you’re right. There wasn’t much.

I can’t help but conclude that “income inequality,” like previous attempts to roll out the homeless, is a convenient media club that is employed during Republican administrations, while it’s generally kept in the closet when Democrats are in the White House.

You will know that I’m right if, as I expect, the topic gets short shrift from the media — with the exception of obsessives like former Times reporter David Cay Johnston and current Times columnist Paul Krugman — in the first few years of the Obama administration.