The country’s gross domestic product contracted for the first time in six years during the final quarter of 2007. After that, a bit of a recovery ensued. While official first-quarter growth was a paltry annualized 0.9%, the second quarter came in at a pretty decent 2.8%. Monthly economic growth estimates from Macroeconomic Advisers (MA) indicate that second-quarter growth was much higher — a stunning 6.4%.

Besides giving rise to legitimate reasons to question the National Bureau for Economic Research’s assertion that the U.S. has been in a continuous recession since December 2007, Uncle Sam’s and MA’s data show what the POR (Pelosi-Obama-Reid) economy has been doing to us since last summer. Uncle Sam says that the economy contracted at an annualized 0.5% in the third quarter, while MA’s numbers for July through October annualize out to a mind-boggling -7.6% — and no one thinks that November and December were any better.

The POR economy kicked in during the latter part of June, when its architects — Nancy Pelosi, Barack Obama, and Harry Reid — decided that starving the economy of energy by refusing to allow more offshore drilling in the face of $4 gas prices was a winning political position. Pelosi claimed that because we couldn’t totally “drill our way out of this,” we shouldn’t increase drilling at all. Reid put an exclamation point on Pelosi’s stubbornness by insisting that fossil fuels are “making us sick.” Ed Morrissey at Hot Air properly characterized Reid’s statement as economic “surrender.”

Democratic presidential nominee Obama’s unique contributions, beyond pathetically insisting that proper tire inflation and tune-ups would solve our energy problems, consisted of promises to radically raise Social Security and federal income taxes on the country’s highest earners, who also happen to largely be the most productive contributors to the economy’s growth.

I observed in July that as a result of these economy-hostile positions, “businesses and investors are responding to their total lack of seriousness by battening down the hatches and preparing for the worst.”

Those preparations were justified. “The worst” arrived; the prospect of a government infected with permanent energy antagonism and profoundly punitive taxes was just the beginning.

Decades-in-the-making meltdowns at Fannie Mae and Freddie Mac, aided and abetted over the years by Democrat cronies like Frank Raines, exposed how those agencies and the Community Reinvestment Act ruined the mortgage-lending market by lowering industry-wide credit approval standards.

As the Fan-Fred poison spread to other lenders, Henry Paulson panicked and decided that he needed a made-up amount of $700 billion to buy “troubled assets,” principally mortgage loans in delinquency and foreclosure. Though President Bush was among those who allowed themselves to be stampeded by the Treasury Secretary’s threats of financial Armageddon, don’t forget that all three POR triumvirate members proudly championed it.

Instead of using the money as promised, Paulson “put a (figurative) gun to the heads” of the major banks and forced them to accept direct government investment. As anyone could have predicted, bailing out one industry has already led to another bailout (GM-Chrysler) and endless calls for more, even going beyond private businesses to the states, local governments, and other public entities.

Why is it any surprise that investors, entrepreneurs, and business managers are in no mood to invest or expand and are shedding employees at a scary rate? Last Friday’s employment data showed that the economy lost over 500,000 jobs on a seasonally adjusted basis for the second month in a row. The actual “on the ground” (not seasonally adjusted) numbers were worse. November and December 2008’s economy underperformed 2007 by almost 1.7 million jobs: 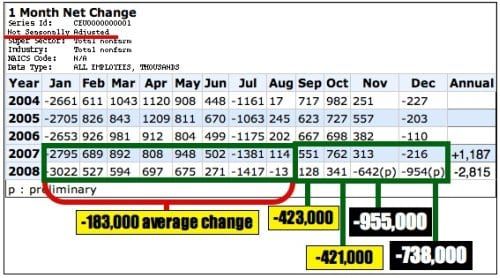 This turndown has been much more severe than it should have been because of a serious breakdown in “the rules of the game.” Why invest in, start up, or expand any kind of business if there’s a realistic possibility that the government will aid your direct or indirect competitors, or otherwise radically and whimsically alter the playing field? This uncertainty has also taken its toll on consumers. Despite having billions of extra dollars available thanks to energy price drops and lower interest rates, their spending appears not to be ramping up proportionally.

The solution from Washington? More bailouts, leading to more uncertainty across the board. Another bigger “stimulus” and a less effective one at that. While tax “rebate” checks such as those sent out last year are not as effective as across-the-board rate cuts, at least they put money into consumers’ pockets quickly. But the new “stimulus” package evolving in Washington is dominated by public “investments” that, even if justified, would take much longer to make their way into the economy.

Roosevelt tried massive public works programs during the Depression. All he did is prolong it for seven years. Japan tried government stimulus for 10 years running in the 1990s. It only resulted in “the lost decade.”

What Pelosi, Obama, and Reid should do is expand the tax cut element of the stimulus plan to include all incomes, ditch almost all of the alleged “investments,” open up oil and gas exploration, and, eventually, watch the royalty money pour in. I know; that’s way too much to “hope” for.