Commander in Chief or Community Organizer in Chief?

You’ve got to hand it to Team Obama. Politically, when under control and on message, they are very good.

Take the economy (please). The president-elect has lowered the bar, telling us that it “is going to get worse before it gets better.” He’s talking tough about imposing conditions (“We are not going to simply write a bunch of checks”) on any bailout of Big 3 automakers General Motors, Ford, and Chrysler. The statements themselves may or may not be sincere, but they play well.

But in spontaneous moments, Obama blows it. This occurred several times during the campaign, and it happened again Sunday. In another one of those “off the teleprompter” moments that became infamous during the presidential campaign, Obama may have undone all of his team’s market-mollifying efforts.

First, though, let’s look at where we are.

It became very clear last Friday that the architects of what I have been calling the POR economy since early July — Nancy Pelosi, Barack Obama, and Harry Reid — have created a doozy of an economic debacle. Since June, when it became obvious to employers and investors that, deliberately or not, the POR triumvirate were driving an economic downturn with their willingness to starve the economy of energy and their grim determination to raise taxes in the face of sluggish conditions, the economy has deteriorated terribly, and, along with it, the employment situation. 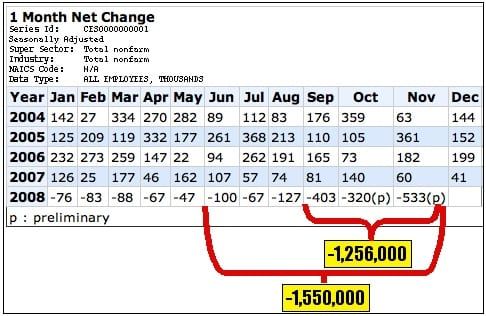 Since June, when Pelosi, Obama, and Reid began working their “magic” in earnest, the economy has lost over 1.5 million seasonally adjusted jobs. What had been an employment slump turned into a quagmire as the prospect, and then the reality, of an Obama win became ever clearer. 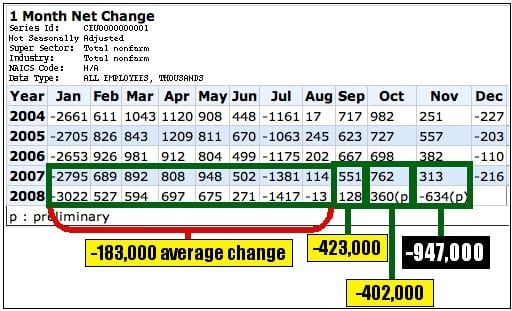 This year, the economy has alternately added fewer or lost more jobs in every month compared to 2007. But what had been a troubling trend clearly became alarming in September and October, and simply awful in November. This occurred as the energy starvation and high-tax postures of Pelosi, Obama, and Reid continued, and the decades-in-the-making crackups at Fannie Mae and Freddie Mac became obvious. Those Democratic-driven failures at Fan and Fred marked the beginning of the bailout mania, otherwise known as the SUCKUP (the Seemingly Unlimited Cash Kitty Under Paulson), which appears to have no end in sight. It is no coincidence that November’s wrong-direction swing of 947,000 — the worst since the early 1960s, even after adjusting for smaller workforce sizes — occurred in the month Barack Obama was elected.

But maybe the markets have misread him — or, more correctly stated, maybe Obama as president will bear no resemblance to Obama the candidate.

It’s easy to make too much of this, but there have been a few hopeful signs:

But in one statement Sunday, reacting to the factory sit-in at Republic Windows and Doors in his native Chicago, Obama set off alarms in the offices of entrepreneurs, businesspeople, and investors everywhere:

President-elect Barack Obama is weighing in on behalf of workers staging a sit-in on the factory floor of their former Chicago employer to protest abruptly losing their jobs last week.

Obama told a news conference Sunday that Republic Windows and Doors should follow through on its commitments to the 200 workers, who say they won’t leave the plant until they are assured they’ll receive their severance and vacation pay.

“The workers who are asking for the benefits and payments that they have earned, I think they’re absolutely right and understand that what’s happening to them is reflective of what’s happening across this economy,” Obama said.

Regardless of the facts and circumstances, Obama’s statement is a dangerous, de facto endorsement of lawlessness that has the potential to shut business owners’ wallets nationwide. As IBDeditorials.com noted:

If he believes the workers deserve the pay they are demanding, he is free to say so. He has no place, however, to support anyone’s decision to trespass on another’s property. To advocate offenses against society is to legitimize them.

It won’t take very much of this before businesses conclude that putting employees on the payroll must be avoided as long as possible, if it’s to be done at all. They will more frequently use temporary agency employees as long as they legally can. They won’t replace employees who retire or leave. They’ll have more work done in other countries. They won’t pursue business ideas that require U.S. employees. The trend toward professional employment organizations (PEOs, or “leased employees”) will accelerate.

More such appearances by Obama as rabble-rousing community organizer in chief will go a long way towards ensuring that his “get worse before it gets better” prediction about the economy becomes tragically true.