POR (Pelosi-Obama-Reid) Congress the Most Profligate of Bush Years

There’s a reason the media, as shown here, glossed over the most basic elements of the full fiscal-year results for Uncle Sam when they were released last week: spending spiraled out of control more than any other single year during the Bush administration.

And guess who’s in charge? Is it a coincidence that the 2007-2008 fiscal year represents the first year for which the Pelosi-Obama-Reid (POR) Congress had full budget-passing responsibility? I think not. But the folks in charge of delivering the news don’t want us to get any crazy ideas while the attempted coronation of Barack Obama is in full swing. 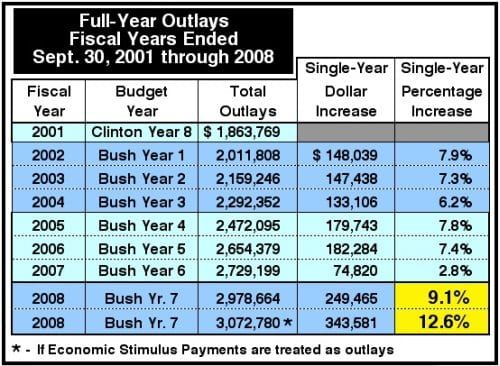 House Speaker Dennis Hastert’s rule during three Bush administration congressional terms has been portrayed as overindulgent and heavy on pork-barrel spending. That characterization is mostly accurate, though there is some justification for increases that occurred during the earlier years.

Fiscal 2002 was certainly affected by post-9/11 homeland security-related responses. Whether you agree with the decisions to fight them, the wars in Afghanistan and Iraq were certainly key components of the increases that took place in 2002 and 2003. But after that, the excuses for spending growth are pretty thin. It is not without reason that many inclined to support George Bush over John Kerry in 2004 held their noses in the voting booth.

Fiscal 2005 and 2006 were particularly odious. The Hurricane Katrina response was a blank check that generated staggering waste. Pork-barrel spending went into overdrive, culminating with a “Republican” senator, Ted Stevens, threatening to resign if he didn’t get his $200-plus million Bridge to Nowhere. (Mr. Stevens and the Alaska GOP may learn in two weeks that resignation would have been a marvelous idea.)

George Bush’s shared culpability for initiating and/or acquiescing to all of this should, of course, not be ignored. Time after time the president had chances — and failed — to pull out his veto pen.

Ironically, the final budget passed under Hastert and Senate GOP leader Bill Frist was relatively restrained. Spending rose barely more than inflation. But it was too little, too late, and voters in November 2006 decided that the Democrats couldn’t do any worse than the Republicans had.

Let’s look at how the POR triumvirate’s first full budget year panned out in comparison to Hastert and Co.’s final year: 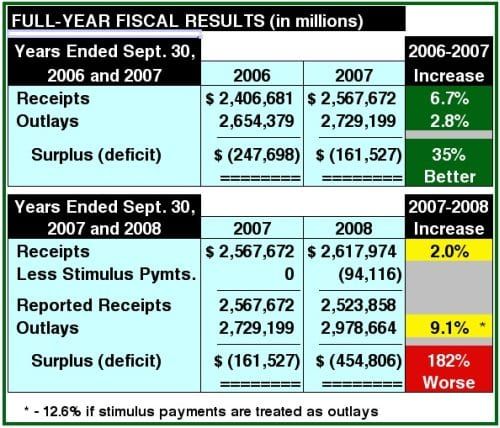 What a difference a year makes.

Pelosi, Obama, and Reid have been singing from the same tax-increasing, energy-obstructing, over-regulating hymnal since they took over in January 2007. The markets and the business community have taken notice, reining in employment, putting expansion plans on hold, and reducing tax receipt-generating economic activity.

On a seasonally adjusted basis, here is what job growth in the past five fiscal years ending September 30 has been:

The case that this is all George Bush’s fault is very thin. It is hardly a coincidence that the first quarter of negative economic growth in over six years took place during the first quarter of Pelosi-Obama-Reid’s first budget. Regardless, the bottom line is that federal receipts have flattened out and appear destined to show year-over-year declines in the coming months.

Congress and the media kept telling us a slowdown was coming. Logically then, it should have reined in spending — and yes, George Bush should have brandished the veto pen more often. But the exact opposite has happened.

Blame it on the surge in Iraq? Hardly. Yes, total military spending increased from $528 billion to $595 billion, but that $67 billion increase is barely a quarter of the total spending increase of $249 billion — and at least the surge accomplished something.

Someone had better remind the next president, whoever he is, and the next Congress, whoever is in charge, that the federal treasury is not a bottomless ATM machine. I fear that serious consequences lie just around the corner.