Two major elements of the developing meme that John McCain did not sufficiently vet presumptive vice-presidential nominee Sarah Palin are highly suspect. Each contention is not provable, and there is strong reason to believe that each is almost completely, if not totally, untrue.

The first assertion is that McCain’s people did little if any vetting of Palin until a few days ago. The second is that McCain’s team has never looked at years of archived articles at Palin’s hometown paper.

The first claim has bubbled up from various sources on the left side of the blogosphere, culminating in this slippery prose found in this morning’s New York Times (slippery wording in bold):

Aides to Mr. McCain said they had a team on the ground in Alaska now to look more thoroughly into Ms. Palin’s background. A Republican with ties to the campaign said the team assigned to vet Ms. Palin in Alaska had not arrived there until Thursday, a day before Mr. McCain stunned the political world with his vice-presidential choice. The campaign was still calling Republican operatives as late as Sunday night asking them to go to Alaska to deal with the unexpected candidacy of Ms. Palin.

Here’s an alternative explanation for the GOP flights to Alaska Ms. Bumiller didn’t consider: McCain has known all along that he would need to send a team to play defense in Alaska shortly after the Palin announcement, because Democratic opposition researchers would be fanning out all over the state.

What’s really rich though, is that by doing a small bit of digging Bumiller either failed to do, or failed to report, Alaska blogger Tom Lamb at It’s a Kwazy Life found this item from late May at Wizbang that likely debunks the Johnny-vets-lately charge (link was in original, and still works):

A tipster sent us word that John McCain’s VP advance man Arthur Culvahouse has been spotted in Juneau, Alaska. There’s only one reason he would be there — to meet with Alaska Governor Sarah Palin about the vice president position.

As the link within the excerpt indicates, Culvahouse, a high-powered DC lawyer, headed up McCain’s vice presidential search effort.

You’d have to gin up quite a conspiracy to believe that Kevin at Wizbang would have made something like that up out of thin air a full three months ago, or that Kevin’s tipster would have lied to him about seeing Culvahouse.

The second dubious claim was asserted Sunday afternoon by Sam Stein at the Huffington Post.

In its “HuffPost Reporting From DC” section, Stein breathlessly reported that McCain’s people hadn’t even read the local paper in Palin’s hometown:

On Saturday, a Democrat tasked with opposition research contacted the Huffington Post with this piece of information: as of this weekend, the McCain campaign had not gone through old newspaper articles from the Valley Frontiersman, Palin’s hometown newspaper.

How does he know? The paper’s (massive) archives are not online. And when he went to research past content, he was told he was the first to inquire.

“No one else had requested access before,” said the source. “It’s unbelievable. We were the only people to do that, which means the McCain camp didn’t.”

The Frontiersman did not immediately confirm the revelation. …

If true, the failure of the Arizona Republican to access the newspaper clippings becomes another in a growing list of revelations that calls into question just how and why he made his decision to choose Palin.

Unfortunately, other bloggers, including Jay McDonough at the Examiner, ran with Stein’s “scoop.”

Stein corrected himself later, but only very slightly:

Some readers have noted that the Frontiersman website includes a small archive of stories about Palin. However, as our original source informed us, and a second Democratic researcher with access to the same records confirms, there have been hundreds of stories on Palin by the Frontiersman dating back over 15 years, only a handful of which are posted online.

Unless the Mat-Su Valley Frontiersman over a holiday weekend, made their archive accessible in the less than 36 hours between the appearance of Stein’s report and my writing this column, Sam Stein is absolutely wrong. There’s over 10 years of archived information available on Sarah Palin in hundreds of articles.

Again barring sudden archive accessibility, Stein either failed to check the story given by his “source” (too good to check?), or he has a shocking inability to navigate the Internet.

If one types “Valley Frontiersman” in quotes into a normal Google web search, here is what comes back listed first: 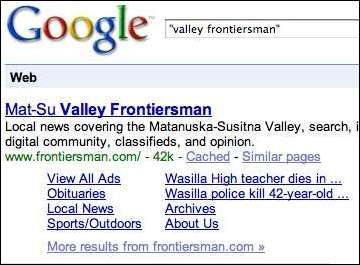 If you click on the “Archives” link in the search result, you land here: 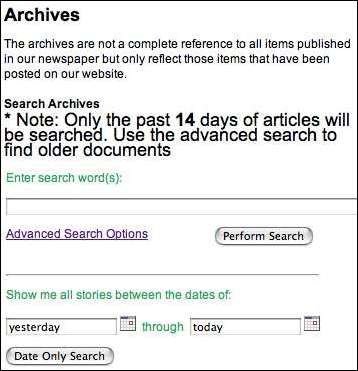 If you click on “Advanced Search Options” at this link, you end up here: 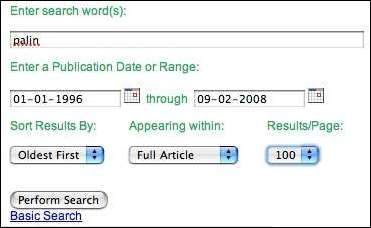 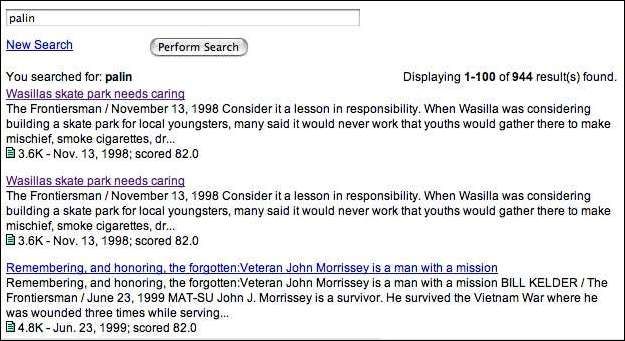 Shazam! There are “hundreds of stories” going back over a decade.

Further, if you click on any story link, you get to read its content. Isn’t it neat how that works, Sam?

Again assuming there has been no sudden access granted to the paper’s archive, isn’t it at least a little likely that Team McCain might have paid a visit or two to this archive without bothering the people at the Frontiersman?

Now it’s conceivable that not every Frontiersman article about Palin is in the 944 items listed, and that the listings appear to include some duplicates. But remember that Sam Stein told us that “only a handful” of stories were online. That’s a lot of fingers for one hand, Sam.

Mr. Stein has a bit of explaining to do. Since he is a “reporter,” he needs to find out and report how long the Frontiersman’s archive has been accessible. Assuming it has been accessible for some time, he then needs to tell us why he gullibly (or not?) let false information travel around the world unanswered for what will probably end up being almost 48 hours — false information that will remain planted in the minds of those who won’t see any retraction or correction. Finally, once again assuming archive accessibility has been present for some time, Stein needs to apologize to Team McCain and the rest of the world for his sloppiness, and consider presenting Arianna Huffington with his resignation.

Update (Sept. 3):  In a phone conversation this afternoon, Greg Johnson, Managing Editor at the Valley Frontiersman, confirmed that the VF’s archives have been online for many years. Sam Stein’s piece at the Huffington Post is still unchanged as of this update.