The April Monthly Treasury Statement issued by Uncle Sam on Monday should put to rest the idea that the government is not getting enough in “revenues” (i.e., taxes) to get by. Contrary to the expectations of many, including myself, that report, along with the April 30 Daily Treasury Statement that preceded it, showed that there is still a bit of life left in George Bush’s supply-side tax cuts: 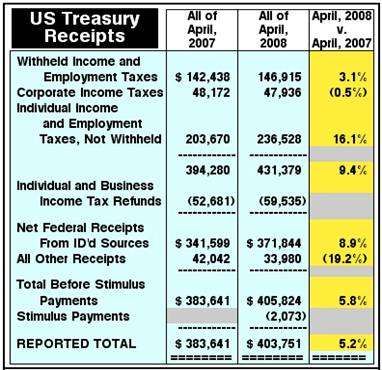 After April 2007’s record collections of $383.6 billion, which broke the previous one-month record set in April 2001 by 15%, I expected the sluggish economy’s mediocre 0.6% growth in each of the past two quarters to cause April 2008’s receipts to come in lower. Surprise!

What is especially heartening in the table above is the large increase in not-withheld receipts. As I noted at my home blog on April 29 when it first became clear that a new receipts record was on the horizon (bold is mine):

The unexpected increase in this not-withheld category consists mostly of final payments that accompany individual 1040s for 2007, plus first-quarter 2008 estimated payments. The increase may not only reflect that entrepreneurs and the self-employed had pretty decent years in 2007, but that many of them are thinking, in the face of relentless media harping to the contrary, that 2008 will be at least as profitable. Estimated payments are supposed to be 25% of last year’s total tax bill, unless the taxpayer figures that the current year’s tax bill will be lower, in which case they can pay in less. I would think that anyone who could defensibly pay in less, would pay in less.

If these not-withheld receipts continue to soar in comparison to previous years, we may see further overall increases in collections that outpace inflation in the next few months. Imagine that. The record-breaking news from the Treasury also leads to a pretty good question relating to the overall economy: if things are so bad, why were April’s tax receipts, which include first-quarter 2008 estimated payments, so high?

In fact, as I pointed out last week, things aren’t so bad. They’re actually improving, and the media’s seemingly fond wish for a recession may go ungranted. Last week, the Institute for Supply Management’s Spring 2008 Semiannual Economic Forecast predicted annualized 1% growth in manufacturing and 2.7% growth in services, which includes the troubled housing and financial services sectors, during the rest of the year. On a weighted-average basis (15% manufacturing, 85% services), that’s 2.4% — not great, but certainly not recessionary.

Looking back, the increases in collections during the past four years have been nothing short of remarkable: 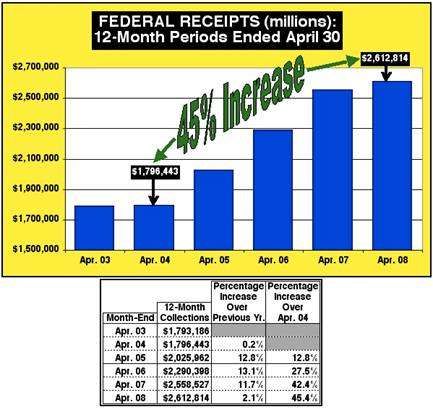 As was the case in the 1920s with Coolidge, the 1960s with Kennedy, the 1980s with Reagan, and 1997 with the Clinton capital-gains tax cut, Bush’s lower tax rates and investment-related tax cuts have led to impressive increases in money coming into the government. Supply-side economics’ naysayers have once again been shown to be wrong.

Supply-side econ works in the opposite direction too. If taxes are allowed to return to their pre-2003 levels over the next few years, as will be the case if Congress does not act, Treasury collections will likely decline, or will at least trail inflation significantly. One could and should argue that in addition to extending the existing tax system — the one the markets have gotten used to for the past six years — the next president should push to enact another business-stimulating, collection-increasing tax cut. Hong Kong, Ireland, Iceland, and Australia, as well as Reagan during the 1980s, have all shown that multiple supply-side cuts continue to lead to increased collections.

Unfortunately, as has been the case during almost all of the current fiscal year and most of the past seven years, April’s great collections news was more than negated by out-of-control spending: 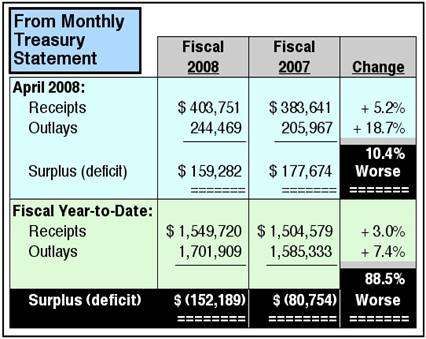 This is a reversal of what had been an unusually good fiscal 2007, where spending only grew 2.8% (last item at link), the lowest in many, many years. Last year’s result occurred because a vulnerable Republican Congress finally got spending religion when it put together the fiscal 2007 budget. Too bad for them that it was too little and too late to save them from losing control of both chambers in the November 2006 elections.

Fiscal 2008 thus far represents the first output of the Pelosi-Reid Congress, which deserves at least half the blame for its dismal result (President Bush gets the rest). Even before considering the “stimulus” checks that are being mailed this month, 7%-plus spending increases with revenues going up at a much slower rate is an unsustainable situation. Yet all three remaining presidential candidates are proposing huge spending initiatives. While Barack Obama’s and Hillary Clinton’s proposals are better known, John McCain’s plans for a massive conversion to a greener economy — in the name of global warming that hasn’t been happening for about ten years — will create a bureaucratic monster that will demand whatever money is necessary to carry out its goals. And it won’t be cheap.

Will anyone tell the candidates that we can’t afford their grandiose plans?