This Is The End

This is the end
My only friend, the end
Of our elaborate plans, the end
Of everything that stands, the end
No safety or surprise, the end

You know it’s bad when I begin by quoting The Doors, but “The End” has been stuck in my head since I started collecting stories for this week’s column.

The first was Erik Sherman’s Inc. writeup of a recent Brookings Institution report on the decline of American entrepreneurship. According to Brookings, “entrepreneurship has reached at least a three-decade low across virtually all of the country.” Three decades also happens to be as long as Brookings has been tracking such things. Sherman adds:

For decades, the entrance of firms outpaced their exit, meaning a net increase in new businesses. The authors see that–reasonably, it seems–as a proxy to an inclination toward entrepreneurism. But since at least 1978, the lines have converged, albeit slowly. In 2008, they reached a watershed moment and crossed.

The math is simple: More firms leaving than arriving means a shrinking percentage of business is being controlled by entrepreneurs. And notice that the exits were relatively steady. It is the creation of new firms that has sagged. 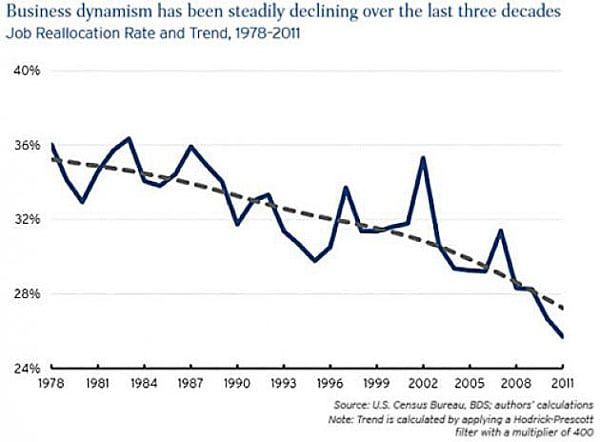 The trend line has never been good, but it accelerated sharply downward in 2010, the year Obamacare was signed into law. While that ought to be the big economic story of the week, as Jean Card writes for US News & World Report, “Riddle me this:”

A Google News search for this week’s alarming study from the Brookings Institution on the decline of business dynamism in the U.S. yields a mere half-dozen results, making it like the proverbial tree falling in the forest. The study is a big deal. It should make a huge amount of noise. Its economic implications are staggering. But no one appears to be listening.

Maybe that’s because the mainstream media was busy touting the ACA’s reputed successes. A Google News search for “Obamacare Success” yields thousands of results from just the last week. The “success” being touted was President Obama’s claim that eight million Americans had signed up for insurance on the various federal and state exchanges, despite earlier claims that the law would cover nearly twice that many. Of course, the original rationale for Obamacare was that 46 million Americans lacked health insurance — but anything can be construed as a success provided you have a compliant media helping to move the goalposts ever closer.

But as we’ll explore right after the page break, we’re just getting started.

Sean Hackbarth reported late last week at the U.S. Chamber of Commerce that we could suffer the loss of up to a quarter of a million jobs, due to the ACA’s Health Insurance Tax:

Our 440-employee business just received its initial premium from United Healthcare for our July 1 renewal. The renewal premium represents a 29% increase over the current premium. UHC indicated that our premiums are going up 11% to bring our deductibles and out of pocket maximums in line with the provisions of the ACA. In other words, without the ACA, our premiums would be going up approximately 18%, not 29%.

New research finds that the added costs of one of Obamacare’s taxes will be brutal on employment.

More than half the expected job losses will come from small business — the once-vibrant heart of American entrepreneurship. Big business doesn’t exactly have it easy, either. General Electric, UPS, Dollar General, and Cognizant all reported lower-than-expected earnings last quarter, in part due to the “Affordable” Care Act. That means fewer opportunities for people looking to move up the corporate ladder, and fewer opportunities for entrepreneurs looking to build their own ladders, so to speak. The sound you hear is millions of doors being slammed shut by those who already have theirs — which is something you should keep in mind the next time you hear President Obama or any Democrat complaining about income inequality.

Also keep this in mind, courtesy of Jay Cost at the Weekly Standard:

Liberals claim the law is “working.” This omits the dozens of provisions that the president has suspended or delayed because they were not working—for budgetary or political reasons. The suspended or postponed provisions include the mandate that businesses cover full-time employees, the cancellation of noncompliant plans, and cuts to Medicare Advantage.

One can assume that, absent a Republican in the White House come 2017, the ACA’s suspended strictures will eventually come into force, denying us even more jobs and lost opportunities to live out our own American dreams.

As I said, we’re just getting started.