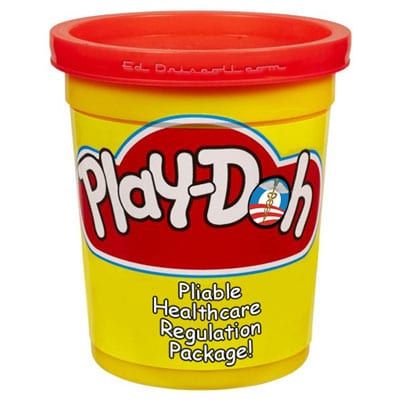 I couldn’t help thinking this was the Worst. Week. Yet., staring once again at the slow-motion train wreck known officially as the Affordable Care Act implementation, or less charitably as the ♡bamaCare!!! Follies. So let us look back on the weary week that was, and then take a brief look ahead at the future of the law Officially So Settled It’s Inscribed in Solid Play-Doh.

So to steal a match from Johnny Carson, how bad was it? Well, you might recall a few months back DNC Chairperson Debbie Wasserman Schultz confidently predicting “that Democratic candidates will be able to run on ObamaCare as an advantage leading into the 2014 election” on Candy Crowley’s little-watched CNN Sunday show. You might also recall — and internet pundits get paid the big bucks to draw these parallels — a little IRS scandal which has been brewing for the last couple days few weeks many months. And what’s the Democratic response to said scandal? To screw up their courage and beg, “More?” It’s true, as The Hill reported:

Senate Democrats facing tough elections this year want the Internal Revenue Service to play a more aggressive role in regulating outside groups expected to spend millions of dollars on their races.

They might get away with it, too — but it won’t help put any daylight between themselves and the ♡bamaCare!!! Follies.

But that’s just the most recent political response. How is the law functioning these days? If you read the comments at DailyKos while heavily medicated, you might be under the assumption that ♡bamaCare!!! has given free insurance and care and puppies to six or maybe even seven trillion Americans, who before the law were forced into slavery to toil in underground Republican sugar mines. But the Weekly Standard‘s Jay Cost looked at the new numbers behind the new numbers, and concluded that the ♡bamaCare!!! enrollment rate had slowed “markedly in January,” Costs adds:

The total enrollment of 3.3 million reported by HHS is an overestimate. At this point, industry insiders estimate that about 20% of people whom HHS claims are enrollees have not paid their premiums. Meanwhile, hard data from a handful of states suggests that the number of non-payees may be larger.

Cost estimates that perhaps just 2.6 million have enrolled, and of those at most 2 million have actually paid up. I could mention here that the administration’s goal is to get 7 million enrolled by the end of March, or that EnrollMaven estimates that ♡bamaCare!!! has forced a bare minimum of 4.7 million off of their insurance — and that would bring the administration’s enrollment needs way up past 12 million…

…but, really, bringing all that up would just be kicking a hurting law while it’s down.

But how about those state exchanges? We small-government types like to believe that state governments, being closer to the people they represent, are generally more in tune with the needs of their residents. And this is true, if by “more in tune” we mean “hiring workers indicted for theft from their employer.” Here’s what’s going on in my home state:

A director with Colorado’s health-care exchange was placed on paid administrative leave Tuesday after it was discovered she has been accused of stealing from a nonprofit housing organization she oversaw in Montana.

Christa McClure, 51 is the director of partner engagement for Connect for Health Colorado, the state program that implements the Affordable Care Act in the state.

The agency swears McClure had been vetted but, really, who has time for thorough hiring practices when you have United States Senator Mark Udall (D-Of Course) breathing down your neck to cook the books.

In other state-level news, California was forced to take down its small-business health exchange “temporarily” while officials “implement a series of redesigns.” At the time of this writing the exchange remains closed, so perhaps the new design could be done up in Comic Sans.

All these items sort of fluttered to the ground during the week, after the administration bombshell on Monday that it would unilaterally delay the employer mandate for medium-size business until conveniently after the next election, and that the large employer coverage mandate would be reduced from 95% of all employees to just 70%. These numbers are best described as having been “pulled out of the administration’s @$$.” Even the evenhanded Megan McArdle described the move as “probably illegal.”

Here’s the thing though. Most medium-size businesses already cover their workers. And virtually all — about 95% — of large employers do. So these “probably illegal” changes will affect only a very few people. The fact that the administration felt compelled to break its own law anyway should give you some indication of just how broken ♡bamaCare!!! really is.

So, yes, I think it’s fair to say this was the law’s Worst. Week. Yet. But ♡bamaCare!!!’s supporters — and I’m told such hardy souls do still exist — can take some small comfort in the knowledge that the worst is yet to come.